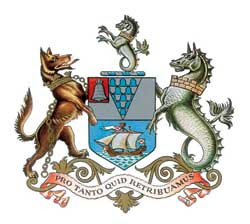 As a girl, I went to Victoria College (then in Shaftesbury Square) by tram from Malone Park along the Lisburn Road. On the glass of the partition that divided passengers from the driver were inscribed Belfast City’s arms and motto; Pro tanto quid retribuamus. So I can explain what Jack meant when he wrote to Arthur Greeves in expressing his gratitude for the offer of MacDonald’s books: " ’Pro tanto quid’, as the tramcars say; what can I give you in return?" This sense of obligation in the city’s motto is more than loyalty; it is commitment, the chief Ulster characteristic.
In The Last Battle the very title tells us that all the gallant courage of Prince Tirian and his loyal Few will not be successful. It will be aquestion of ‘sticking it’. The story goes from treachery, through obligation on to accountability and judgement. But threre is much glory in this wonderfully written apocalypse. Tirian, looking into the stable through the hole in the door, says, "The stable seen from within and the stable seen from without are two different places." Digory answers, "Its inside is bigger than its outside." It is the perceptive Lucy who voices the hope that is in us, "In our world, too, a stable once had something inside it that was bigger than our whole world." As Prince Rilian said (in The Silver Chair), "Aslan will be our good Lord, whether He means us to live or die." Meaningful words for young Ulster people today, as always.
Belfast Coat of Arms
The present Belfast Coat of Arms dates from 30 June 1890 when the Ulster King of Arms made a Grant of Arms to the new city of Belfast. The motto ‘Pro tranto quid retribuamus’ comes from Psalm 116, verse 12 of the Bible. Translated from the Latin, it means ‘what return shall we make for so much’. The precise origins and meanings of the symbols contained on the Coat of Arms are unknown. However, images such as the bell, the seahorse, the ship and the chained wolf were all used by 17th century Belfast merchants on their signs and coinage. The seahorse, which is used twice, shows the maritime importance of Belfast, as does the ship at the base of the shield. The name ‘Belfast’ also originates from the Gaelic ‘Beal Feirste’, which means ‘mouth of the river’.
Posted by Arborfield at 7:53 am