Warnie on the death of Charles Williams 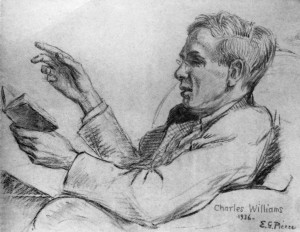 At 12.50 this morning I had just stopped work on the details of the Boisleve family, when the telephone rang, and a woman's voice asked if I would take a message for Jack —"Mr. Charles Williams died in the Acland this morning".  One often reads of people being "stunned" by bad news, and reflects idly on the absurdity of the expression; but there is more than a little truth in it.  I felt just as if I had slipped and come down on my head on the pavement.  J had told me when I came into College that Charles was ill, and it would mean a serious operation; and then went off to see him: I haven't seen him since.  I felt dazed and restless, and went out to get a drink: choosing unfortunately the King's Arms, where during the winter Charles and I more than once drank a pint after leaving Tollers at the Mitre, with much glee at "clearing one throats of varnish with good honest beer": as Charles used to say.

There will be no more pints with Charles: no more "Bird and Baby": the blackout has fallen, and the Inklings can never be the same again.  I knew him better than any of the others, by virtue of his being the most constant attendant.  I hear his voice as I write, and can see his thin form in his blue suit, opening his cigarette box with trembling hands.  These rooms will always hold his ghost for me.  There is something horrible, something unfair about death, which no religious conviction can overcome.

"Well, goodbye, see you on Tuesday Charles" one says — and you have in fact though you don't know it, said goodbye for ever.  He passes up the lamplit street, and passes out of your life for ever.  There is a good deal of stuff talked about the horrors of a lonely old age; I'm not sure that the wise man — the wise materialist at any rate — isn't the man who has no friends.  And so vanishes one of the best and nicest men it has ever been my good fortune to meet.  May God receive him into His everlasting happiness. 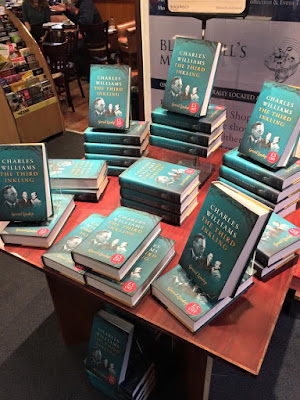 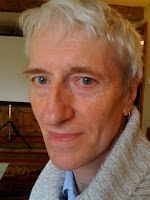 Just a fortnight away from the launch of Grevel Lindop's new Charles Williams biography. Author Grevel Lindop discusses the shadowy figure of poet, theologian, magician, and fantasy-writer Charles Williams. He describes the influence of this extraordinary and controversial figure who was also a central member of the Inklings.
Posted by Arborfield at 12:29 pm No comments:

Day 19
Charles Williams' wife Michal saw 1st performance of his play [Terror of Light] & said 'I think it is dreadful!' CW rewrote it over the weekend.

Day 18
Charles Williams thought WW2 could be affected by his poems: 'Must write poem about archangels destroying octopuses, ensure Macarthur conquers in East'

Day 17
Payment for Charles Williams's play [House of the Octopus]

Day 16
It was Anne Ridler who first proposed the idea of a spiritual group or society of Charles Williams's followers.

Day 14
1948 C.S Lewis nightmare: chased by lions; 'A figure approached — touched my hand — "Hallo Jack!"—it was Charles. And I knew everything was ALL RIGHT.'

Day 13
After conversation about some other poet, Charles Williams said to his wife "I say, you won't ever write my biography, will you?"

Posted by Arborfield at 11:34 am No comments: 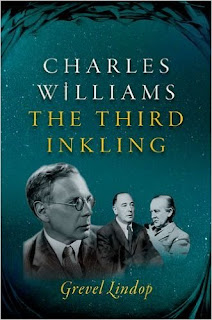 Click on the title above... here is the URL too:

Day 30In 1919 Charles Williams underwent a Rosicrucian initiation ritual which involved his being tied, standing, to a full-sized wooden cross.

Day 29
In CW's poem [Vision of the Empire] the image of the headless Emperor is from Byzantine historian Procopius [Secret History] XII.

Day 26
Charles Williams's wife Michal offered him a divorce during his relationship with colleague and sweetheart Phyllis Jones.

Day 23
CharlesWilliams drafted 1944 codicil to will: 'I do not wish that anything written before 1939 shall be published ...'

Day 22
Charles Williams used to tell his students: "You must get poetry into your blood & your bones! Yes into your BLOOD & your BONES!' ‪#‎NationalPoetryDay‬

Day 21
Charles Williams researched roses in the Encyclopedia Britannica to write his poem 'Taliessin in the Rose Garden'.