Grief being better than estrangement 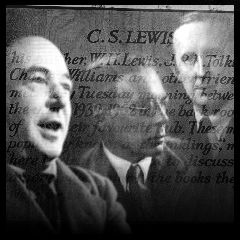 I think what you say about 'grief being better than estrangement' is very true.  I am sorry you should have had this grief but, as you describe it, one can't be sorry for the call.

I also have become much acquainted with grief now through the death of my great friend Charles Williams, my friend of friends, the comforter of all our little set, the most angelic.  The odd thing is that his death has made my faith ten tunes stronger than it was a week ago.  And I find all that talk about 'feeling he is closer to us than before' isn't just talk.  It's, just what it does feel like - I can't put it into words.

One seems at moments to be living in a new world.  Lots, lots of pain but not a particle of depression or resentment.

By the bye I've finished a selection from Geo. Macdonald (365 extracts) which will come out about Xmas: wd. you (or not) care to have it dedicated to you? I feel it is rather yours by right as you got more out of him than anyone else to whom I introduced his books.  Just let me know.

And why should you assume I'm too occupied to see you?  Friday mornings in term are bad, but alright in Vac: and Friday afternoons in both.  I shd. like a visit (with a week's notice) whenever you find one convenient.

Excuse this paper.  It may be less blotched than yours but yours did,at least begin life as a real piece of note paper!  I'm so glad Dan has got his job made permanent.

Collected Letters (Volume II)
From the Letter to Mary Neylan – 20th May 1945
Posted by Arborfield at 7:55 am No comments:

Where?
The Centre for Medieval and Renaissance Studies, Shoe Lane, Oxford 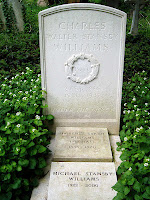 The day will begin with the AGM followed by lunch -- anyone fancy a pint in the 'Bird and Baby' after visiting Charles' grave at St. Cross Cemetery? 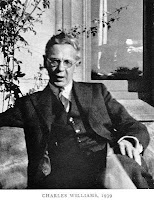 Anyone within reach of Oxford with an interest in this most important 'Inklings' poet and author would be VERY welcome.


Of Diffidence in Love

Yet sleeps she in her chamber : longer yet
I at her soul's gate will maintain the guard,
And watch beside shut casement, portals barred,
Till with the dawn her life its dreams forget.
Shall I dare sound then, lest the knocking fret
Her thoughts, much weighed with house-hold service hard ?
Or of the lit shrine break their still-regard ?
I dare : against the door my hand is set.

Charles Williams
Sonnet 36
The Silver Stair (1912)
Posted by Arborfield at 9:08 am No comments: 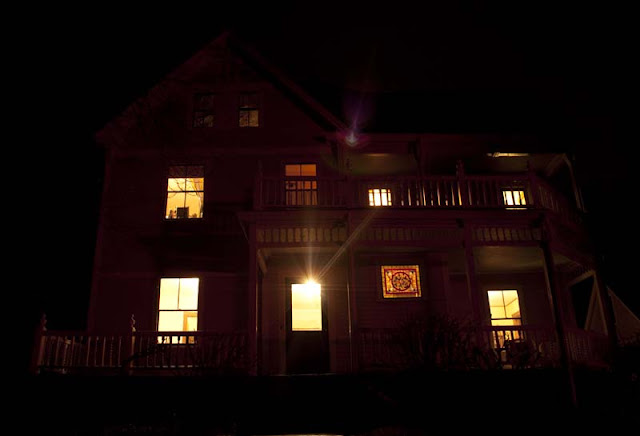 It was early evening when my journey began.  The train was full, but not yet uncomfortably full, of people going home.  It is important to insist - you will see why in a moment - that I was under no illusion about them.  If anyone had asked me whether I supposed them to be specially good people or specially happy or specially clever, I should have replied with a perfectly truthful No.  I knew quite well that perhaps not ten percent of the homes they were returning to would be free, even for that one night, from ill temper, jealousy, weariness, sorrow or anxiety, and yet - I could not help it - the clicking of all those garden gates, the opening of all those front doors, the unanalysable home smell in all those little halls, the hanging up of all those hats, came over my imagination with all the caress of a half-remembered bit of music.  There is an extraordinary charm in other people's domesticities.  Every lighted house, seen from the road, is magical: every pram or lawn-mower in someone else's garden: all smells or stirs of cookery from the windows of alien kitchens.

from "The Coming Of The Butterflies" 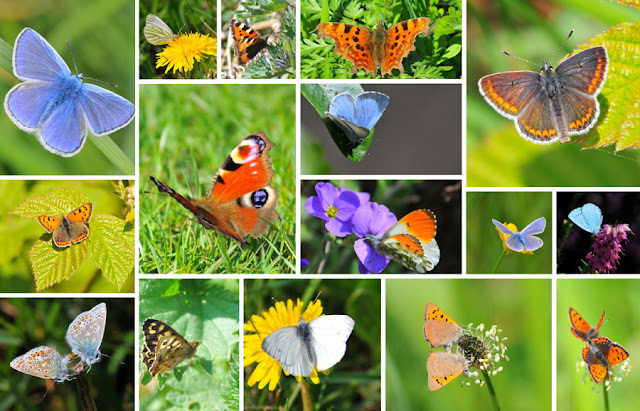 There was a sudden upward sweep of green and orange through the air in front of him: he blinked and moved. As he recovered himself he saw, with startled amazement, that in the centre of the garden, almost directly above the place where he had seen the lion, there floated a butterfly. But - a butterfly! It was a terrific, colossal butterfly, it looked as if it were two feet or more across from wing-tip to wing-tip. It was tinted and coloured with every conceivable brightness; green and orange predominating. It was moving upward in spiral flutterings, upward to a certain point, from which it seemed directly to fall close to the ground, then again it began its upward sweep, and again hovered and fell.

Of the two men it seemed to be unaware; lovely and self-sufficient it went on with its complex manoeuvres in the air. Anthony, after a few astonished minutes, took his eyes from it, and looked about him, first with a general gaze at all his surroundings, then more particularly at Mr. Tighe. The little man was pressed against the gate, his mouth slightly open, his eyes full of plenary adoration, his whole being concentrated on the perfect symbol of his daily concern. Anthony saw that it was no good speaking to him.

He looked back at the marvel in time to see, from somewhere above his own head, another brilliancy - but much smaller - flash through the air, almost as if some ordinary butterfly had hurled itself towards its more gigantic image. And another followed it, and another, and as Anthony, now thoroughly roused, sprang up and aside, to see the better, he beheld the air full of them. Those of which he had caught sight were but the scattered first comers of a streaming host.

Away across the fields they came, here in thick masses, there in thinner lines, white and yellow, green and red, purple and blue and dusky black. They were sweeping round, in great curving flights; mass following after mass, he saw them driving forward from far away, but not directly, taking wide distances in their sweep, now on one side, now on another, but always and all of them speeding forward towards the gate and the garden beyond. Even as a sudden new rush of aerial loveliness reached that border he turned his head, and saw a cloud of them hanging high above the butterfly of the garden, which rushed up towards them, and then, carrying a whirl of lesser iridescent fragilities with it, precipitated itself down its steep descent; and as it swept, and hovered, and again mounted, silent and unresting, it was alone. Alone it went soaring up, alone to meet another congregation of its hastening visitors, and then again multitudinously fell, and hovered; and again alone went upward to the tryst. 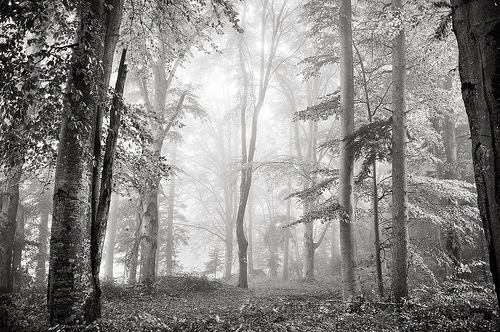 I am afraid I have been far too casual about 'magic' and especially the use of the word; though Galadriel and others show by the criticism of the 'mortal' use of the word, that the thought about it is not altogether casual. But it is a v. large question, and difficult; and a story which, as you so rightly say, is largely about motives (choice, temptations etc.) and the intentions for using whatever is found in the world, could hardly be burdened with a pseudo-philosophic disquisition! I do not intend to involve myself in any debate whether 'magic' in any sense is real or really possible in the world. But I suppose that, for the purposes of the tale, some would say that there is a latent distinction such as once was called the distinction between magia and goeteia. Galadriel speaks of the 'deceits of the Enemy'. Well enough, but magia could be, was, held good (per se), and goeteia bad. Neither is, in this tale, good or bad (per se), but only by motive or purpose or use. Both sides use both, but with different motives. The supremely bad motive is (for this tale, since it is specially about it) domination of other 'free' wills. The Enemy's operations are by no means all goetic deceits, but 'magic' that produces real effects in the physical world. But his magia he uses to bulldoze both people and things, and his goeteia to terrify and subjugate. Their magia the Elves and Gandalf use (sparingly): a magia, producing real results (like fire in a wet faggot) for specific beneficent purposes. Their goetic effects are entirely artistic and not intended to deceive: they never deceive Elves (but may deceive or bewilder unaware Men) since the difference is to them as clear as the difference to us between fiction, painting, and sculpture, and 'life'.

Both sides live mainly by 'ordinary' means. The Enemy, or those who have become like him, go in for 'machinery' – with destructive and evil effects — because 'magicians', who have become chiefly concerned to use magia for their own power, would do so (do do so). The basic motive for magia – quite apart from any philosophic consideration of how it would work – is immediacy: speed, reduction of labour, and reduction also to a minimum (or vanishing point) of the gap between the idea or desire and the result or effect. But the magia may not be easy to come by, and at any rate if you have command of abundant slave-labour or machinery (often only the same thing concealed), it may be as quick or quick enough to push mountains over, wreck forests, or build pyramids by such means. Of course another factor then comes in, a moral or pathological one: the tyrants lose sight of objects, become cruel, and like smashing, hurting, and defiling as such. It would no doubt be possible to defend poor Lotho's introduction of more efficient mills; but not of Sharkey and Sandyman's use of them.

Anyway, a difference in the use of 'magic' in this story is that it is not to be come by by 'lore' or spells; but is in an inherent power not possessed or attainable by Men as such. Aragorn's 'healing' might be regarded as 'magical', or at least a blend of magic with pharmacy and 'hypnotic' processes. But it is (in theory) reported by hobbits who have very little notions of philosophy and science; while A. is not a pure 'Man', but at long remove one of the 'children of Luthien'. 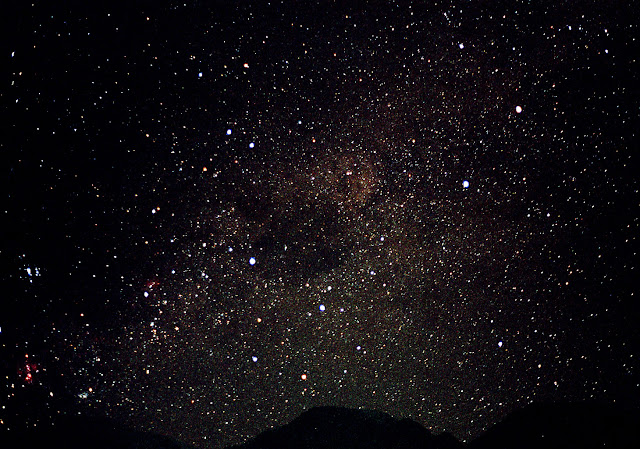 You must therefore conceal from the patient the true end of Humility.  Let him think of it not as self-forgetfulness but as a certain kind of opinion (namely, a low opinion) of his own talents and character.  Some talents, I gather, he really has.  Fix in his mind the idea that humility consists in trying to believe those talents to be less valuable than he believes them to be.  No doubt they are in fact less valuable than he believes, but that is not the point.  The great thing is to make him value an opinion for some quality other than truth, thus introducing an element of dishonesty and make-believe into the heart of what otherwise threatens to become a virtue.  By this method thousands of humans have been brought to think that humility means pretty women trying to believe they are ugly and clever men trying to believe they are fools.  And since what they are trying to believe may, in some cases, be manifest nonsense, they cannot succeed in believing it and we have the chance of keeping their minds endlessly revolving on themselves in an effort to achieve the impossible.