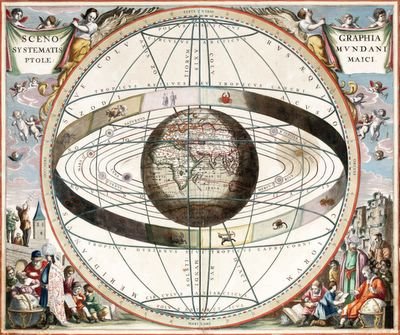 A little introduction to Ptolemy before we proceed further...

The Universe according to Ptolemy
The Greek astronomer Claudius Ptolemy (100-178 AD), lived in Alexandra in Egypt, at the meeting point of the ancient Arabic and European cultures. He summarised the astronomical knowledge of the Greek civilization in his book 'The Almagest', cataloguing 1,028 stars and describing all known variances of the constellations and legends of them. He gave the star formations the traditional names of the Greek and Roman cultures, which are still used today.

In his book Ptolemy also made a description of the solar system, the 'Field of Arbol', mainly based upon the results of the ancient Greeks, in particular of Hipparchus.

According to Ptolemy the Universe was an enclosed sphere with the Earth fixed in the centre. The stars were fixed on the inner side of the sphere, which was constantly rotating around the Earth. Between the stars and the Earth, the Sun, Moon, and planets and other Universal appearances were in rotary motion.

In the Ptolemaen system a planet describes an circular orbit (the epicycle), of which the centre rotates in an other circle, around a point that deviates from the centre of the Earth. By varying the speed of the planets and diameter of the various circles this gave an acceptable description of the planetary movements.

Ptolemy assigned the following order to the planetary spheres, beginning with the innermost; a metal being assigned to each:

Outside this sphere was believed to be the abode of God and His Saints.

Ptolemy was the last of the great ancient astronomers, his ideas and descriptions of the planetary system lasted for 1400 years.

(Next Posting -The Discarded Image)

Amongst the speakers at the Wycliffe Hall Summer School in Oxford in July 2006 was Revd Dr Michael Ward, Chaplain of Peterhouse, University of Cambridge. A former President of the Oxford Lewis Society and resident warden of The Kilns, Lewis's Oxford home, Dr Ward has an MA in English from Oxford and another in Theology from Cambridge.

His St Andrews University doctoral dissertation examined Lewis's theological and imaginative engagement with the seven heavens of medieval cosmology. In February 2003, Ward was reading Lewis' poem, 'The Planets', published in 1935. As he read the poem, he noticed something that no previous reader had seen.

He was reading the section of 'The Planets' that deals with Jove, or Jupiter, when he was struck by its resonance with 'The Lion, the Witch, and the Wardrobe'. The poem speaks of "winter passed / And guilt forgiven" and goes on to give what is, Ward opines, "essentially a plot summary" of the first book in the Narnia Chronicles:

Joy and jubilee. It is JOVE's orbit,
Filled and festal, faster turning
With arc ampler. From the Isles of Tin
Tyrian traders, in trouble steering
Came with his cargoes; the Cornish treasure
That his ray ripens. Of wrath ended
And woes mended, of winter passed
And guilt forgiven, and good fortune
Jove is master; and of jocund revel,
Laughter of ladies. The lion-hearted,
The myriad-minded, men like the gods,
Helps and heroes, helms of nations
Just and gentle, are Jove's children,
Work his wonders. On his white forehead
Calm and kingly, no care darkens
Nor wrath wrinkles: but righteous power
And leisure and largess their loose splendours
Have wrapped around him--a rich mantle
Of ease and empire. Up far beyond

Read in conjunction with the Jupiter passage in 'That Hideous Strength', it seems certain that the Ptolemaic universe held a particular and continuing fascination for that Professorial Medievalist, C. S. Lewis:

Jupiter
Upstairs his mighty beam turned the Blue Room into a blaze of lights. Before the other angels a man might sink: before this he might die, but if he lived at all, he would laugh. If you had caught one breath of the air that came from him, you would have felt yourself taller than before... Kingship and power and festal pomp and courtesy shot from him as sparks fly from an anvil. The pealing of bells, the blowing of trumpets, the spreading out of banners, are means used on earth to make a faint symbol of his quality. It was like a long sunlit wave, creamy-crested and arched with emerald, that comes on nine feet tall, with roaring and with terror and unquenchable laughter. It was like the first beginning of music in the halls of some King so high and at some festival so solemn that a tremor akin to fear runs through young hearts when they hear it. For this was great Glund-Oyarsa, King of Kings, through whom the joy of creation principally blows across these fields of Arbol, known to men in old times as Jove...

Was it possible, Ward wondered, that each of the seven Narnia books was written under the sign of a different planet in the Ptolemaic universe?

Each planet, in a greatly simplified summary of the medieval understanding, represented a certain set of linked emotions and images, a temper, a disposition, along the spectrum -- we are all familiar with 'jovial', 'martial', 'saturnine' or 'mercurial' dispositions -- and these are reflected, Ward postulates, in the Narnia books, both in the big arc of each story and in countless fine touches throughout each volume.

(Next Posting - The Ptolemaic Universe) 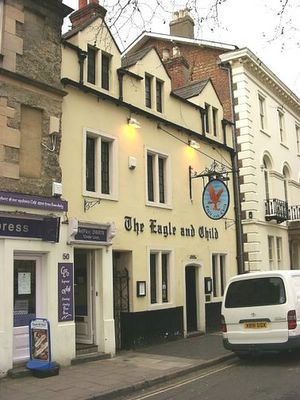 Over this house a star
Shines in the heavens high,
Beauty remote and afar,
Beauty that shall not die;

Let us very clearly understand that, in a certain sense, it is no more possible to invent a new ethics than to place a new sun in the sky. Some precept from traditional morality always has to be assumed. We never start from a tabula rasa*; if we did, we should end, ethically speaking, with a tabula rasa.
~ C.S. Lewis, Christian Reflections, "On Ethics" (1943)

Aristotle said that only those who have been well brought up can usefully study ethics: to the corrupted man, the man who stands outside the Tao, the very starting point of this science is invisible.
~C.S. Lewis, The Abolition of Man, (1943)
*"blank slate" or "blank page"

I am currently in Wycliffe Hall in Oxford on their Summer School -- Apologetics with special concern for CS Lewis thought. Nice to be back here, and to be thinking about the great man again 'in situ'.

PS The Kilns was looking a bit worse for wear when I visited a couple of days ago.
Posted by Arborfield at 3:52 pm 3 comments: