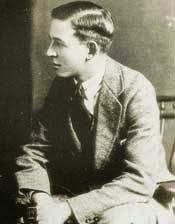 Neville Coghill habitually took notes at lectures and minutes of meetings in Chaucerian English, just a small sample will suffice from 1923, never mind the context!

“Sir Lewis was ther; a good philosópher
He hadde a noblé paper for to offer.
Well couthe he speken in the Greeké tongue;
And yet, his countenance was swythé yong.” 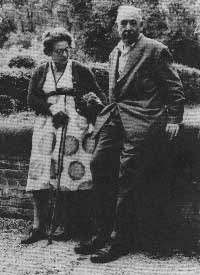 Now, the ‘received’ understanding of the relationship between Joy and C.S Lewis is that the secular marriage in 1956 was a purely nominal affair. The renewal of Joy's visa to remain in England had been refused, and Lewis, a bachelor, went through the marriage ceremony simply in order to make her a British citizen. They were at this time only friends; the relationship did not turn into love, and a real marriage, until after Lewis knew that she was terminally ill. The Hooper-Green biography describes Lewis as "doing the only thing that a gentleman could have done". This is, of course, the premise of Shadowlands. However, the situation actually seems to have been a good deal more complicated than that.

Lyle Dorset, in his biography of Joy, quotes a friend of Joy's as quoting her as saying in 1956 how happy she was to "hold hands with Jack and walk through the heather." This implies that she was in love with him at this time even if he wasn't with her. George Sayer says that he doesn't believe this, since it would have been out of character for Lewis to hold hands with a woman he didn't think he could marry.

George Sayer knew about the ‘secret’ registry office marriage and reports that Lewis positively stated at this time that he was not in love with Joy. (Indeed, he records a cryptic remark of Lewis's made in 1955 to the effect that he might have considered marrying Ruth Pitter had he not "burned all his bridges behind him".)

Lewis wrote to Arthur Greeves in 1955, that a ‘real’ marriage to Joy would, in his view, be adultery, and that the projected ‘technical’ marriage must not be allowed to turn into a ‘real’ one for this reason "an easy resolution when one doesn't in the least want it."

However, Lewis's brother Warren evidently believed that Lewis' was not being entirely honest with himself about the situation, writing in his diary that when Jack told him the marriage was purely formal that "I saw the uselessness of disabusing him."

Douglas Gresham (Joy's son and Lewis's stepson) paints a rather different picture of the events. He reports that Lewis told him in 1956 that the reason he had left Oxford and taken the post in Cambridge was that "when a man is considering getting married...he has to consider things like a better salary with which to support them". This would mean that Lewis had thought of marrying Joy before her English visa had become an issue, indeed (astonishingly) before she was formally divorced from her first husband. He goes on to say that "whatever he may have told his friends and colleagues" Lewis and Joy very rapidly came to regard the registry office wedding as a real marriage; and that they made plans for Joy to move into Lewis's home "long before March 1956."

Andrew Rilstone
Posted by Arborfield at 5:40 am No comments: