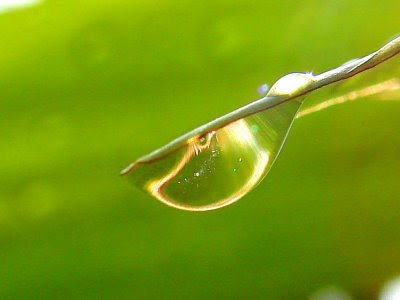 I
n 1939, Tolkien gave a talk at Oxford on 'Fairy-Stories', later published in Essays presented to Charles Williams. In this he quoted a poem he had written for Lewis (cf. Carpenter, Inklings, 63):

Man, Sub-creator, the refracted Light
through whom is splintered from a single White
to many hues, and endlessly combined
in living shapes that move from mind to mind.
Though all the crannies of the world we filled
with Elves and Goblins, though we dared to build
Gods and their houses out of dark and light,
and sowed the seed of dragons -- 'twas our right
(used or misused), that right has not decayed:
we make still by the law in which we're made.

Thus Tolkien saw our (inklings) creativity as something like craft: a pleasant matter of professional obligation as a human being.
Posted by Arborfield at 11:34 am No comments: 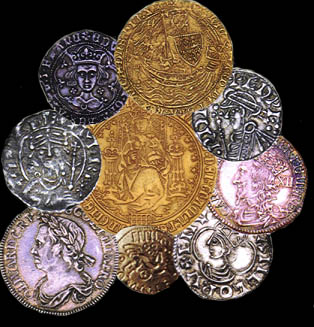 Dec. 15th 1945
“... I am (these last 6 months) immersed in a v. different poet who I think great – Charles Williams: the two volumes of his Arthurian poems Taliessin and The Region of the Summer Stars. Inexcusably difficult, as I always told him, but here there really is something behind the difficulty – that something wh. we all need most in literature at present & wh. I wd. call opaque splendour – thick, rich, solid, heavy – porphyry, gold diamond.” 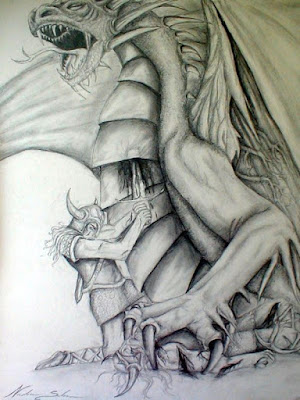 The Dragon in Beowulf… signifies the feond mancynnes (the enemy of mankind) and of God, so that the battle between Beowulf and the monsters on a higher level means that ‘the real battle is between the soul and its adversaries’ (p. 73). The figure of the monster externalises the evil within each soul. Hence it is the hero Beowulf and not the poem upon whom Tolkien focuses in the article’s title. More anagogically, such a battle with a feond also signifies the conflict between man and his ultimate enemy, Death. Tolkien imagines the Beowulf poet surveying past heroes so that he ‘sees that all glory (or as we might say “culture” or “civilization”) end in night’ (p. 73).

In this world, as Germanic heroic values have it, ‘man, each man and all men, and all their works shall die’ (p.73). So the Beowulf poet represents for Tolkien the hero of the title, an idea conveyed by the article’s last line and final metaphor. Tolkien expresses his confidence in the permanence of Beowulf, given its similar language, geographical setting, and nationality of author – ‘it must ever call with a profound appeal’ – only, however, ‘until the dragon comes’ (p. 88). Even art will eventually perish before the final adversary of all creation, the antithesis of its Author – total annihilation. The Dragon thus concretely realises those allegorical personifications whom Milton portrayed as the offspring of Satan’s mind in Paradise Lost – Sin and Death. It recurs, in varying form, throughout Tolkien’s works.

Tolkien’s Art 'A Mythology for England' ~ Jane Chance Nitzsche (Page 5) (Introduction)
Posted by Arborfield at 11:21 am No comments:

Glaurung -- The Father of Dragons 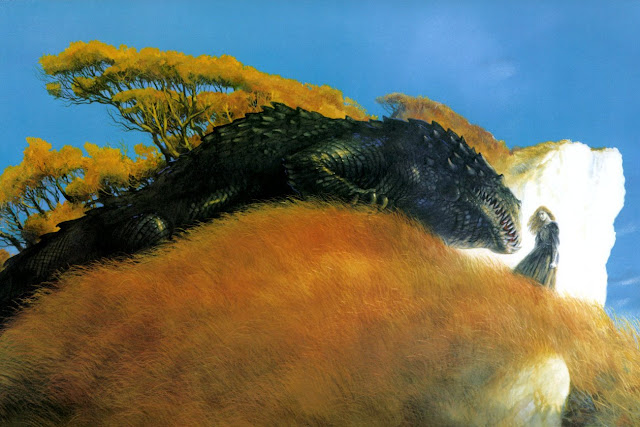 Glaurung was a very powerful dragon, if not the most magical. The largest of dragons, discounting the later flying dragons. Most cunning and full of guile, at times he used these abilities to achieve his desired ends without resorting to direct physical violence, at which he was more than proficient. Like Sauron, another of his contemporaries, it was his nature to trick and deceive, and to spread lies and deceptions so cleverly that they could not be discovered until it was too late. In this manner, he accomplished damage that he could not have with brute force.

It is told that Glaurung sired the rest of his race, or at least the brood of Úruloki, wingless fire-breathing drakes. He was bred by Morgoth from some unknown stock and was the first dragon to appear outside of Angband. This first appearance occurred during the Siege of Angband in 260 First Age, when he came forth alone to attack, but because he was still young and his scales were not yet proof against arrows, he was driven back to Angband by Elven Horse-archers of Fingon. After this premature adventure, Morgoth kept Glaurung on a short leash until all the forces of Angband were ready.

In 455 First Age, all was prepared and Morgoth unleashed Glaurung, now grown to his full might. The Dragon spearheaded the attack of fire that defeated the Noldorin Elves and their allies and broke the Siege of Angband in the Battle of Sudden Flame, the Dagor Bragollach. In 472 during the Battle of Unnumbered Tears, Glaurung leads the final reserve and the beasts of Angband in an attack that prevents the joining of the two Elven-hosts and breaks and routs the Host of the sons of Fëanor causing the total defeat of the Union of Maedhros. During this battle Glaurung was stabbed in his vulnerable belly by the Dwarf-king Azaghâl and fled back to Angband.

In 495, having recovered from his wound and restored his fires Glaurung is given his first independent command and leads an Orc-host to victory in the Battle of Tumhalad against the Noldor of Nargothrond led by Túrin Turambar. He follows up his triumph by sacking Nargothrond, enslaving or slaying its people. He also fulfils Morgoth's special purpose to afflict the children of Húrin, deceiving by enchantment both Húrin's son, Túrin, and daughter, Nienor, causing their tragic ends. After the sack of Nargothrond, he made a bed of the treasure of the city and ruled Nargothrond as a Dragon-king.

In 498 Túrin led the Men of the forest of Brethil and defeated a force of Orcs sent against them by Glaurung. Glaurung then roused himself and next year came against Túrin and Brethil with fire. In the attempt to cross the ravine of Cabed-en-Aras of the river Taeglin, Glaurung was stabbed from beneath by Túrin wielding the black, magic, and sentient sword Gurthang. Glaurung died soon after, but not before he had managed to drive Nienor to suicide with his last words, lifting the spell of forgetfulness he had cast upon her about her kinship with Turambar.

Wikipedia (!)
Posted by Arborfield at 7:52 am No comments: 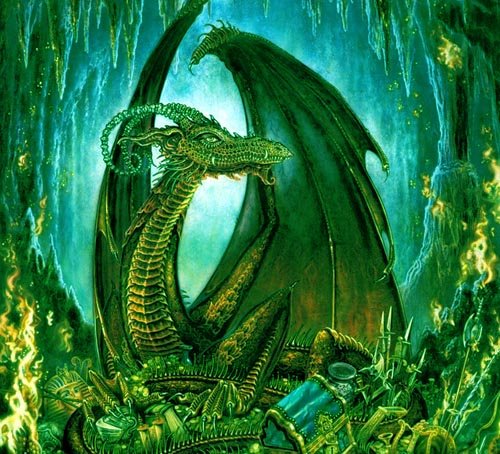 Once the worm-laid egg shattered in the wood.I came forth shining into the trembling wood;The sun was on my scales, dew upon, the grasses.The cold, sweet grasses and the sticky leaves,I loved my speckled mate. We played at drueryAnd sucked warm milk dropping from the ewes' teals.Now I keep watch on the gold in my rock caveIn a country of stones; old, deplorable dragon,Watching my hoard. In winter night the goldFreezes through tough scales my cold belly;Jagged crowns, cruelly twisted rings,Icy and knobb'd, are the old dragon's bed.Often I wish I had not eaten my wife(Though worm grows not to dragon till he eats worm).She could have helped me, watch and watch about,Guarding the gold; the gold would have been safer.I could uncoil my tired body and takeSometimes a little sleep when she was watching.Last night under the moonset a fox barked,Startled me; then I knew I had been sleeping.Often an owl flying over the country of stonesStartles me; then I think that I must have slept,Only a moment. That very moment a ManMight have come from the towns to steal my gold.They make plots in the towns to take my gold,They whisper of me in the houses, making plans,Merciless men. Have they not ale upon the benches,Warm wives in bed, and song, and sleep the whole night?I leave my cave once only in the winterTo drink at the rock pool; in summer twice.They have no pity for the old, lugubrious dragon.Lord that made the dragon, grant me thy peace,But say not that I should give up the gold,Nor move, nor die. Others would have the gold.Kill rather, Lord, the Men and the other dragons;Then I can sleep; go when I will to drink. 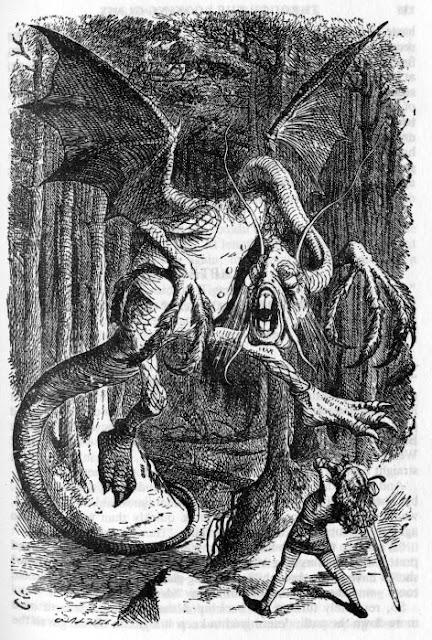 "… the critic metamorphoses into the monster of the jabberwock, an unnatural creature that symbolises… perversion… This creature creates cacophony through a ‘conflicting babel’ of opinion: “For it is of their nature that the jabberwocks of historical and antiquarian research burble in the tulgy wood of conjecture, flitting from one tum-tum tree to another” (p. 56).

They no longer constitute a physical danger to others because of the myopia, which resembles that of the ‘friends’ and ‘descendants’: “Noble animals, whose burbling is on occasion good to hear; but through their eyes of flame may sometimes prove searchlights, their range is short” (p 56).

Such shortsightedness hints at a greater spiritual danger to themselves as well as to others, for the ‘conflicting babel’ of their opinions reminds us of the confusion of tongues at the Tower of Babel, as the epitome of the sin of pride (of course… the critics destroyed the tower of the artist in their pride). Pride and selfishness, myopia, a ‘conflicting babel’ of opinion, destructiveness, chaos, all characterise the critic – truly a monster."

Tolkien’s Art 'A Mythology for England' ~ Jane Chance Nitzsche (Page 12)
Discussing and quoting from ‘The Critic as Monster: Tolkien’s Lectures [1936]

Posted by Arborfield at 1:30 pm No comments:

The Lay of the Children of Húrin (excerpt) 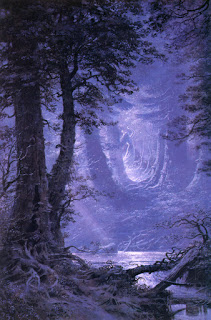 (JRRT)
Posted by Arborfield at 9:18 am No comments: