The Dilettante and the Don 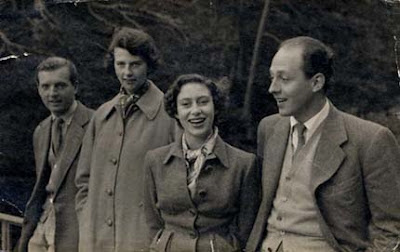 [A radiant Princess Margaret with John Betjeman on her left in about 1950. On her right is her lady-in-waiting Lady Elizabeth Cavendish, Betjeman's intimate friend, and beyond her is the Old Etonian Simon Phipps, later Bishop of Lincoln. Lady Cavendish and Betjeman engaged in an illicit affair from their meeting (in the early 1950s) until Betjeman's death.]

Betjeman & Clive Staples Lewis at Oxford
Although only eight years older than his pupil, C S Lewis's undergraduate experience of Oxford had been very different from Betjeman's. Born in 1898, he attended University College for one term before being shipped out to the Western Front in 1917, where he was wounded by an exploding shell at the battle of Arras. He returned to Oxford after the war and took a First in Greats, then a degree in English, but like many ex-servicemen he found himself completely at odds with the fast cars and flappers mentality of the early and mid-'20s. There had been just twelve other undergraduates at University College in 1917, when Lewis was 18 and the right age to be carefree. By the time he returned, he was 21 and had lived through a war that had killed the golden boys of his generation and he was in no position to appreciate the so-called Golden Aesthetes of Betjeman's day.

Moreover, there was the additional problem of the School of English Language and Literature, whose establishment in 1894 had attracted the sort of intellectual opprobrium usually reserved for Media Studies today: 'a school for soft-optioners, school teachers, and women'. In order to elevate the study of English above 'mere chatter about Shelley', the emphasis in the taught syllabus was on language rather than literature. Alongside the big writerly guns (Shakespeare, Spenser, Milton), undergraduates were required to study Anglo-Saxon, Middle English and the history of English language and philology. Without an intimate knowledge of Grimm's Law formulating sound-change in early Germanic consonants, even the most diligent student taught by an entirely sympathetic tutor would struggle to excel if language was not their metier, and so Betjeman the puckish dilettante and Lewis the unyielding pedagogue embarked on a fraught master-pupil relationship, the repercussions of which haunted Betjeman for the rest of his life.

Lewis's idea of a literary salon at this pre-Inklings, pre-Christian stage of his career was a roistering beer-and-baccy session, reciting Norse sagas in his booming voice and encouraging his students to chant linguistic mnemonics out loud. His teaching style was pugnacious, and with his tweed jacket, pipe and aggressively unpoetic vocabulary (excellence was indicated by a laconic 'all right'; defaulters were said to need 'a smack or so' to get them into line), Jolly Jack Lewis appeared to be the embodiment of everything that was hearty and antithetical to the fey, Anglo-Catholic aesthete Betjeman, who admired Victoriana and minor poets and incensed his tutor by insisting that Oscar Wilde's lover, Lord Alfred Douglas (with whom Betjeman had enjoyed an illicit correspondence when he was at Marlborough), was a greater writer than Shakespeare.

'I wish I could get rid of the idle prig', Lewis confided to his diary. 'I was rung up on the telephone ... from Moreton in the Marsh, to say that he hasn't been able to read the OE, as he was suspected for measles & forbidden to look at a book. Probably a lie, but what can one do?' Or again, when Betjeman did deign to turn up, he 'appeared in a pair of eccentric bedroom slippers and said he hoped I didn't mind them, as he had a blister. He seemed so pleased with himself that I couldn't help replying that I should mind them very much myself but I had no objection to his wearing them.' Betjeman's attempt to win his tutor over by inviting him to tea in his rooms in St Aldate's only alienated Lewis further, as he was forced to participate in conversations about lace curtains and to mingle with 'a galaxy of super-undergraduates', including 'an absolutely silent and astonishingly ugly person called McNeice [sic]'.

It was hardly a surprise, then, that when Betjeman failed the elementary but compulsory First Public Examination in Holy Scripture, his tutor was less than supportive of his requests for help. What was perhaps more surprising was that 'Bishop Betjy', with his attachment to all things ecclesiastical, should have been unsuccessful in his 'Divvers' exam, not once but twice in his third year, before being sent down at the end of Hilary term 1928.

From Betjeman to Lewis (never sent) 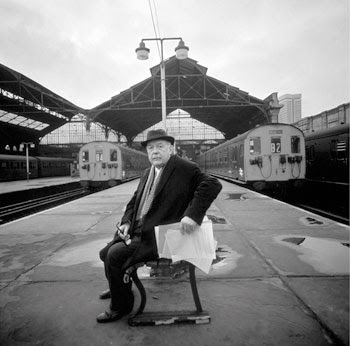 "It seems to me that we have two different approaches to poetry. Both, I hope, have a sense of the sound of words and of metre and stress in common. After that there is no common ground. Your approach is philosophical, or metaphysical or abstract or something I do not understand. Mine is visual. I would cite a bit of your own poetry - a poem called 'The Planets' which opens with the line: "Lady Luna in light canoe". I don't see how anyone who has looked at the moon can think of it as "cruising monthly" in a light canoe. If we are going back to the day of my lack of style, what 'style' us this?" 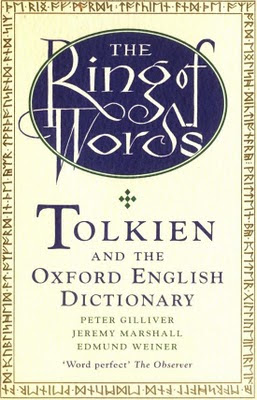 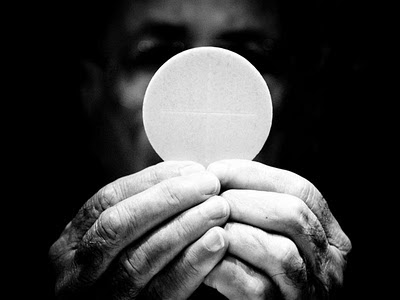 This waybread of the Elves had a potency that increased as travellers relied on it alone and did not mingle it with other foods. (LR vi. iii)

In ordinary English usage, this (OED: WAYBREAD) is a folk-name of the plantain (Plantago), meaning literally 'broad-leaved plant growing beside the way'. The second part of the word is related to broad, and has nothing to do with bread. However, Tolkien has punningly adopted the word as if it were a literal compound of 'way’ and 'bread' in order to have an English equivalent to the Elvish lenibas? (explained as being from len 'way5 and bos 'bread'), the cakes provided in Lothlorien which kept the Fellowship, especially Frodo and Sam, nourished on their journeys. It does not occur in Tolkien's earlier writings, but appears in 'Of Tuor and his Coming to, Gondolin' (1951) in Unfinished Tales.

Spiritually minded etymologists might also discern here a scholarly link with the word viaticum. In Roman Catholic practice, this is the consecrated bread of the Eucharist administered to someone; who is dying or in danger of death. The Latin word viaticum originally meant simply 'provision for a journey'; it comes from Latiri via 'way', and from it developed the word voyage (borrowed from French into English and originally meaning simply 'a journey'). Tolkien acknowledged the comparison between lembas and the Eucharist as miraculously sustaining forms of bread: the waybread provides food for Frodo and Sam on a journey that, to the best, of their knowledge, leads to death. He comments that 'far greater,: things may colour the mind in dealing with the lesser things of a fairy-story1 (Letters 213, 25 October 1958). 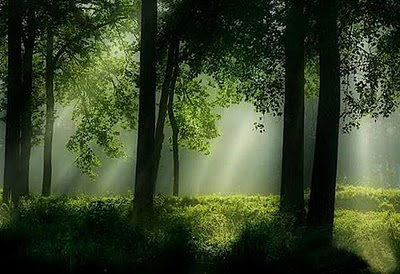 Any patch of sunlight in a wood will show you something about the sun which you could never get from reading books on astronomy. These pure and spontaneous pleasures are “patches of Godlight” in the woods of our experience.

C.S. Lewis ~ Letters from Malcolm
Posted by Arborfield at 7:51 am 3 comments:

The Wood between the Worlds 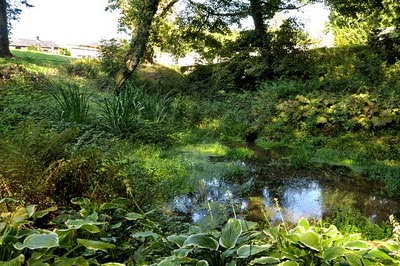 There’s a brilliant section in one of the Narnia novels, The Magician’s Nephew, in which the book’s heroes, a boy and girl called Polly and Digory, find some magic rings which transport them into a place called the wood between the worlds. It’s a magical forest full of trees and little pools of water, and they discover that by jumping in the pools they can enter into hundreds of different worlds. It’s one of these jaunts that takes them to a brand new world which eventually becomes Narnia.

What’s great about this sequence is the moment of horror when the children realise that there is no way to clearly identify which pool leads to which world, or indeed, the one that leads them back to their own. They suddenly realise that they risk getting completely lost in the wood between the worlds, with no way to return home.

Michael Parsons ~ Times Online
19th October 2007
Posted by Arborfield at 7:27 am No comments: 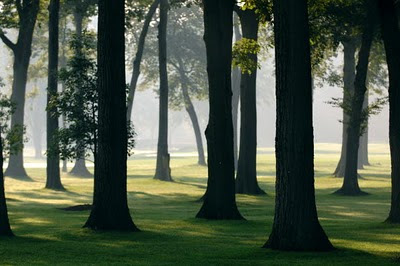 [The last two postings prompted by Ian Lowell]
Posted by Arborfield at 7:11 am 2 comments:

The Image of Wood 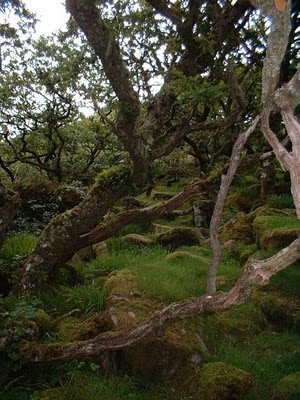 “The image of wood has appeared often enough in English verse. It has indeed appeared so often that it has gathered a good deal of verse into itself; so that it has become a great forest where, with long leagues of changing green between them, strange episodes of high poetry have place. Thus in one part there are the lovers of a midsummer night, or by day a duke and his followers, and in another men behind branches so that the wood seems moving, and in another a girl separated from her two lordly young brothers, and in another a poet listening to a nightingale but rather dreaming richly of the grand art than exploring it, and there are other inhabitants, belonging even more closely to the wood, dryads, fairies, an enchanter’s rout. The forest itself has different names in different tongues—Westermain, Arden, Birnam, Broceliande; and in places there are separate trees names, such as that on the outskirts against which a young Northern poet saw a spectral wanderer leaning, or, in the unexplored centre of which only rumours reach even poetry, Igdrasil of one myth, or the Trees of Knowledge and Life of another. So that indeed the whole earth seems to become this one enormous forest, and our longest and most stable civilizations are only clearings in the midst of it.”