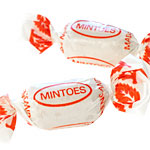 Jack and Warnie's nickname for Mrs. Moore was Minto. This apparently was derived from Minto sweets. Why? Unknown, although it is likely they were Janie Moore's favourite (as they are mine)!

Posted by Arborfield at 3:45 pm No comments: 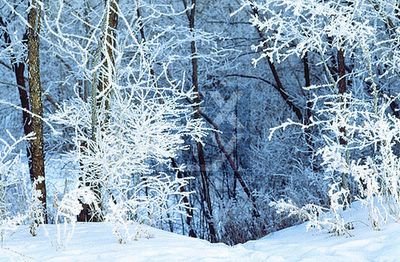 In 1951 Janie King Moore (Mrs. Moore or 'Minto') died at the age of 78. Minto was the mother of C.S. Lewis's friend from the 1st World War, Paddy Moore. She and her daughter Maureen came under Lewis's care after Paddy's death in that conflict.

So ends the mysterious self imposed slavery in which J has lived for at least thirty years. How it began, I suppose I shall never know but the dramatic suddenness of the "when" I shall never forget. When I sailed for West Africa in 1921, we were on the terms on which we had always been: during my absence we exchanged letters in which he appeared as eager as I was for a long holiday together, when, for the first time, I was to have a long leave and plenty of money: and when I came home, I found the situation established which ended on Friday...

It is quite idle, but none the less fascinating to muse of what his life might have been if he had never had the crushing misfortune to meet her: when one thinks of what he has accomplished even under that immense handicap. It would be Macaulaysque to say that he took a First in the intervals of washing her dishes, hunting for her spectacles, taking the dog for a run, and performing the unending futile drudgery of a house which was an excruciating mixture of those of Mrs. Price and Mrs. Jellaby*; but it is true to say that he did all these things in the intervals of working for a First. Did them too with unfailing good temper (towards her) at any rate...

Most infuriating to the onlooker was the fact that Minto never gave the faintest hint of gratitude: indeed she regarded herself as J's benefactor: presumably on the grounds that she had rescued him from the twin evils of bachelordom and matrimony at one fell swoop! Another handicap of this unnatural life was to keep J miserably poor at a time of life when his creative faculties should have been at full blast, which they couldn't be under the strain of money worry; for his allowance was quite insufficient to keep Minto and Maureen as well as himself in any sort of comfort...

I wonder how much of his time she did waste? It was some years before her breakdown that I calculated that merely in taking her dogs for unneeded "little walks", she had had five months of my life. I don't think J ever felt as much as I did, the weariness of the house's unrestfulness so long as she managed it; even after ten or more years of it.

Posted by Arborfield at 9:39 am No comments: 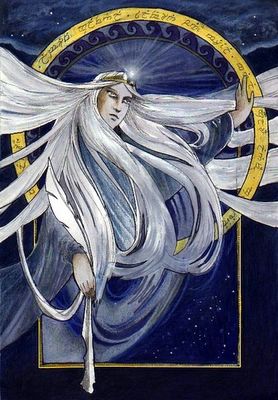 Snow-white! Snow-white! O Lady clear!
O Queen beyond the Western Seas!
O light to us that wander here
Amid the world of woven trees!

Gilthoniel! O Elbereth!
Clear are thy eyes and bright thy breath,
Snow-white! Snow-white! We sing to thee
In a far land beyond the Sea.

O stars that in the Sunless Year
With shining hand by her were sown,
In windy fields now bright and clear
We see your silver blossom blown!

O Elbereth! Gilthoniel!
We still rember, we who dwell
In this far land beneath the trees,
Thy starlight on the Western Seas.

Posted by Arborfield at 7:24 pm No comments: 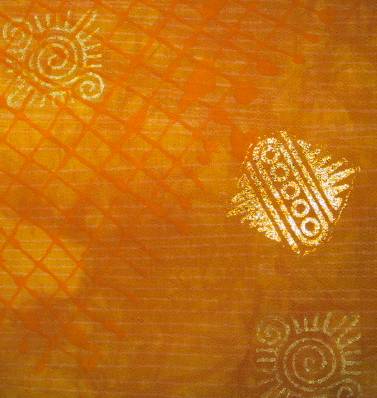 Thanks for your most interesting cards. How do you get the gold so good? Whenever I tried to use it, however golden it looked on the shell, it always looked only like rough brown on the paper. Is it that you have some trick with the brush that I never learned, or that gold paint is better now than when I was a boy! [...]

I'm not quite sure what you meant about "silly adventure stories without my point". If they are silly, then having a point won't save them. But if they are good in themselves, and if by a "point" you mean some truth about the real world which which one can take out of the story, I'm not sure that I agree. At least, I think that looking for a "point" in that sense may prevent one sometimes from getting the real effect of the story in itself - like listening too hard for the words in singing which isn't meant to be listened to that way (like an anthem in a chorus). I'm not at all sure about all this, mind you: only thinking as I go along.

We have two American boys in the house at present, aged 8 and 6 1/2. Very nice. They seem to use much longer words than English boys of that age would: not showing off, but just because they don't seem to know the short words. But they haven't as good table manners as English boys of the same sort would. [...]

Posted by Arborfield at 6:59 pm No comments:

Elvish Philosophy of Death and Incarnation 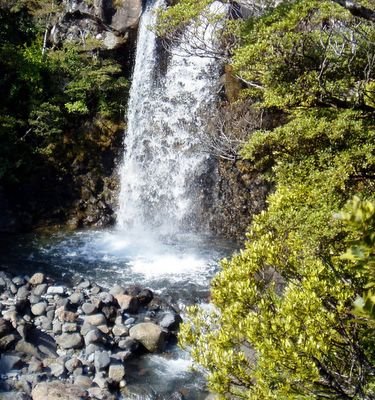 Of their fate after life the Elves know much, because of their long staying in Valinor and of what they learned there from the Valar. Concerning Men the most lore on their afterlife are speculations, since Men have never got in touch with the Valar in any greater degree.

The fate of the Elves: The Elves see themselves as two different parts: the Fea (spirit) and the Hroa (body). The two parts are not bound to each other, but without the Hroa, the Fea is powerless, and with no spirit, the body is dead and will soon dissolve.

The life-span of the Elves is by nature the same as that of the world (although they are often called immortal, which is a totally different thing). But the Elves call earth "Arda Sahta", the Marred World. Within its borders, nothing can be uninfluenced by Melkor, and Elves and Men, who are made of Arda's matter, are all likely to suffer in some way.

Thus the elvish Fea tend to "consume" the Hroa, until all that is left of it is a vague shape and it is indeed indestructable. Also, the Elves may die of grief or wounds (but not by disease) and then the F�a will leave the Hroa. Then the "houseless" Fea will be summoned to the Halls of Mandos, and it may go there of its own free will. Most Fea do this, but those who have been influenced by Melkor and are corrupt often dread the punishment they will receive in Mandos and stay in Middle-earth, trying to take over some other Hroa that already contains a Fea. Those who follow the summons may, if they wish, be incarnated in a new-born body, identical to the previous. The others stay in Mandos until the end of the world. For the Elves are bound to the world, and cannot leave it. All Fear, whatever way they choose, must wait in Mandos for a time; how long depends on the invidual. If the Fea has done evil in its previous life it must often wait longer until allowed to return to life. But sometimes it has to stay for good. Feanor was for instance never allowed to leave Mandos.

The reborn Elf is in all ways a child again, and does not remember its previous life until its experience and knowledge has grown. Then its life becomes double rich, since it has experienced two childhoods and has memories from two lives. There are few cases where an Elf has been reincarnated more than once. The reason for this is unknown. There are no documented examples of reincarnated Elves except, perhaps, Glorfindel of Gondolin who may have been reborn in the Second Age and helped Frodo and company to Rivendell. But it is not definitely established that the two Glorfindels are one.

The fate of Men: Men are not, contrary to the Elves, "bound to the world." They have by Eru been granted a special gift: death. When Men die, thy go to the Halls of Mandos but do not stay there for long. They proceed away from the world and leave its borders, to which fate no-one knows. This has become a dread among Men, since they do not know what will follow.

This dread is brought to them by Melkor; the Elves, who are bound to live on until the world's end, cannot understand this fear of Eru's gift. Some Men claim that they are not mortal by nature, but that it has been caused by Melkor. (The Elves, though, do not beleive this, since they do not think Melkor has the power to change the fate of a whole race.) This is based on an old legend that can be considered the story of the "fall" of mankind.

Before any Men had yet died, Eru spoke to them and told them he would watch over them and help them if the needed him. But when they later asked him things, he would more often urge them to find the answers for themselves and enjoy the finding.

Then Melkor appeared among them in a beautiful shape and told them that he would help them and give them much knowledge if they took him to lead them. He gave them many gifts and tought them much lore and they would start fearing for a life without him. Then they spoke of Eru, whom they had only heard as a voice. This made Melkor wrathful, and he said Eru was the Darkness that wished to devour them. Then he went away. After a long time of grief and poverty a darkness came over the world and blotted out the sun.

Then Melkor came back shining like a torch, and they bowed before him. Men built a temple for Melkor, and swore him their service. A long time they served him, but now he rarely gave out gifts or advice, or they had to pay for it with a gift or some evil deed.

Eru did not speak to them again, but once, when he said Men had abandoned him: but they were still his subjects. Therefore he would shorten their lives, and let them come to him and learn who was their true lord. After that, some started dying, and Men went to Melkor for help. But Melkor did not hide his plans any longer. He told them that they should obey him or he would slay them. In time he started rewarding those that served him the best, which often were those who were the most cruel to others. Some Men started talking against him openly, but those he let put to death by fire in his temple.

The legend ends saying that some Men flew and came to the sea, and found the Enemy there before them.

Posted by Arborfield at 10:06 am No comments: