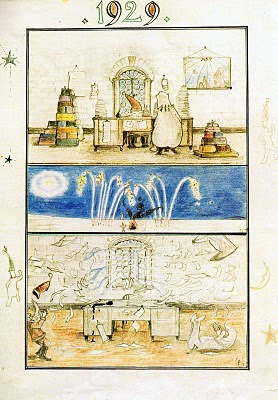 It is a light Christmas again, I am glad to say — the Northern Lights have been specially good. We had a bonfire this year (to please the Polar Bear), to celebrate the coming in of winter. The Snow-elves let off all the rockets together which surprised us both. I have tried to draw you a picture of it, but really there were hundreds of rockets. You can't see the Elves at all against the snow background. The bonfire made a hole in the ice and woke up the Great Seal, who happened to be underneath. The Polar Bear let off 20,000 silver sparklers afterwards - used up all my stock, so that is why I had none to send you. Then he went for a holiday!!! — to north Norway — and stayed with a wood-cutter called Olaf, and came back with his paw all bandaged just at the beginning of our busy times. There seem more children than ever in all the countries I specially look after. It is a good thing clocks don't tell the same time all over the world or I should never get round, although when my magic is strongest — at Christmas — I can do about a thousand stockings a minute, if I have it all planned out beforehand. You could hardly guess the enormous piles of lists I make out. I seldom get them mixed. But I am rather worried this year. You can guess from my pictures what happened. The first one shows you my office and packing room and the Polar Bear reading out names while I copy them down. We had awful gales here, worse than you did, tearing clouds of snow to a million tatters, screaming like demons, burying my house almost up to the roofs. Just at the worst the Polar Bear said it was stuffy! and opened a north window before I could stop him. Look at the result — only actually the North Polar Bear was buried in papers and lists; but that did not stop him laughing.

J.R.R. Tolkien
Posted by Arborfield at 9:24 am No comments:

Auden & the Inklings (I) 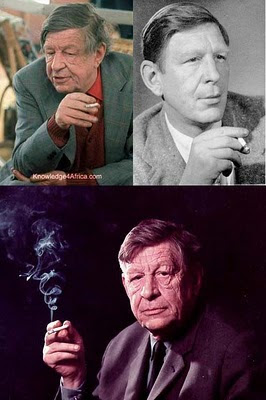 W.H. Auden had been unable to believe in God since his adolescence. His loss of faith and his discovery of poetry had come, interestingly enough, at almost the same time. But in the late thirties, as Auden’s uncertainty about his role as a poet grew (along with political and social tensions in Europe) some odd things began to happen to him. When in Spain during that country’s Civil War, for instance, he was shocked and disturbed to see that supporters of the Republican cause had closed or burned many of Barcelona’s churches — but he could not account for his own reaction. Soon afterward, he met the English writer and editor Charles Williams, and felt himself to be “in the presence of personal sanctity” — though what sanctity meant in a world without God he could not say.

By the fall of 1940 he was going to church again, for the first time since childhood, and would affirm the Christian faith for the rest of his days.

However, the many readers who have rejoiced in the work of Auden’s fellow British Christians, the Inklings — Lewis, Tolkien, Charles Williams, and (peripheral to their circle) Dorothy Sayers — have paid little attention to this remarkable man or the extraordinary work that emerged from his embrace of the Christian faith. 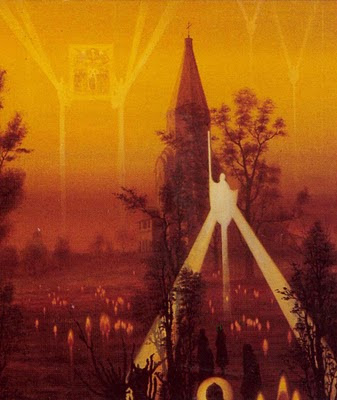 Even the greatest writers struggle to describe human goodness, and very few (William Blake, Charles Williams) can speak of heavenly things without giving their audience the church giggles. There’s just something about an aura of divine love that stunts the human vocabulary. 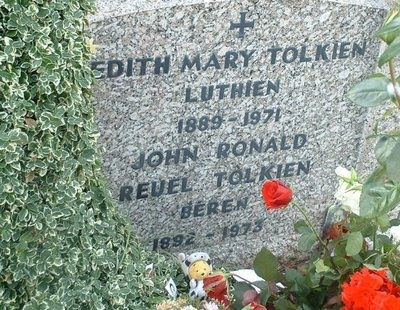 In The Lord of the Rings Beren and Luthien are frequently compared to Aragorn and Arwen. Arwen too has the choice of remaining immortal or marrying Aragorn. She chooses Aragorn and thus chooses death, a subject of much pain to her father, Elrond, who will live forever with only his recollection of her.

Tolkien definitely compared his relationship to his wife, Edith Bratt, to the relationship between Beren and Luthien. When Tolkien first met Edith, she was a Protestant, and Tolkien, a devout Catholic was advised not to marry her. In fact, Edith did forsake her family by converting to Catholicism. So it is said that even the first meeting of Beren and Luthien is an echo of Tolkien’s life.

Beren spies Luthien dancing in the woods and falls deeply in love with her. On a romantic starry night, Edith danced for Tolkien and immediately entranced him. Edith was older than Tolkien; she was 19 and he was 16. This reflects Luthien’s agelessness and maturity, as compared to Beren’s relative youth.

Clearly the family struggle that ensued and the opposition Edith encountered in attempting to marry Tolkien was a source of pain to Edith. Luthien is shown as sorry for the family conflict she causes, yet resolute in her path to marriage. Tolkien’s words breathe a kindly sympathy to Edith’s family and an understanding of their pain, while celebrating Edith’s choice for his sake.

Tolkien’s relationship to Edith, and his deep love for her are perhaps even more romantic than his fictional treatment of the subject. To be Luthien, the most beautiful and desired of her people in Tolkien’s eyes, was the highest regard he could possibly give a woman. Further it expresses Tolkien as almost feeling he doesn’t quite deserve the grace that is Luthien, even though Beren, and Tolkien are worthy men.

Throught their long lives, Tolkien referred to Edith as Luthien, and to himself as Beren, this being even carried over to their gravestone in Wolvercote Cemetery.
Posted by Arborfield at 8:10 am No comments:

The fall of Gil-galad 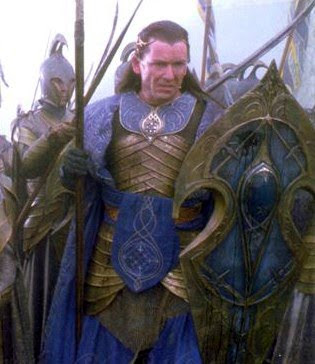 A brief extract from a poem "The fall of Gil-galad", sung Sam Gamgee to the company on Weathertop before the attack of the Nazgûl:

Gil-galad was an Elven-king.
Of him the harpers sadly sing:
the last whose realm was fair and free
between the Mountains and the Sea.

His sword was long, his lance was keen,
his shining helm afar was seen;
the countless stars of heaven's field
were mirrored in his silver shield.

But long ago he rode away,
and where he dwelleth none can say;
for into darkness fell his star
in Mordor where the shadows are.

"That's all I know," stammered Sam, blushing.
"I learned it from Mr. Bilbo when I was a lad."

The Fellowship Of The Ring - JRRT
Posted by Arborfield at 7:57 am 1 comment:

"Born of Hope" is now available 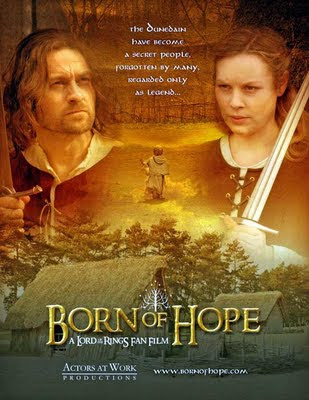 "Born of Hope" became available for web viewing from 1st December. I have... and it's wonderful, a triumph!

A first review:
When we think of a ‘fan film’ we immediately conjure the image of corduroy trousers, thick rimmed glasses and a couple of 30-somethings living with their mum. Imagine the setting – back garden, local park, poorly disguised living room. Imagine the costume – eBay outfits, plastic ears and children’s toys over a backdrop of clunky dialogue and appalling editing. What you probably won’t see is a massive crew, glorious locations and choreographed action set against a superb musical score. What you won’t see is Lord of the Rings.

Unless you are watching Born of Hope.

Conceived in 2003 by director and actor Kate Madison, Born of Hope is a marvel of what can be achieved with dogged determination and the support of thousands of Tolkien fans. Shot for around £23000 at locations around the UK in 2008/09, it is released today (1st December) on Daily Motion, for free.

What is so special about Born of Hope is in the detail. It is a completely original tale set before the Lord of the Rings trilogy, based on the trials of Aragorn’s father Arathorn, leader of an ever dwindling tribe of nomadic rangers. He has to face the end of his royal line at the behest of the monstrous Orc horde. But that is actually a simplistic view of what is a complex story of love, duty and responsibility. There’s no easy choices for Arathorn (played by actor Chris Dane), who must protect his son even if it means sacrificing his people, and his wife.

Against this excellent tale comes the detail in costume, set design and choreography. Scores of Orcs were recruited using custom made prosthetics, amazing armour, and borrowed props from the equally impressive fan film The Hunt for Gollum. Everything from the hairpieces to the swords was spot on.

The majority of the cast were actors working for nothing between projects, the extras were a mixture of re-enactors and stage-fighters.

It’s even more amazing considering its difficult production. After a test shoot in 2006 the production had all sorts of issues, not the least the schedule – when working for free, people have to find time in their working life, including the actors. To confound matters, Tolkien Enterprises, like all companies with intellectual property rights, weren’t too keen on allowing such a production and Kate had to negotiate a solution.

It’s probably one of the reasons the cast & crew felt like a family; with so much to do, and so little time to do it everyone has to muck in. In some cases in meant braving the harsh November climes and camping out at West Stow in -5C. Or maybe starting a fire and stirring a cauldron of stew meant for the whole team. Or just providing hugs and coffee (thanks to the runners for that!).

It wasn’t just the production team who carried a burden either. Legions of fans donated to the cause and egged the production on, even after four years.

It paid off, with accolades showering the ambitious production from day one, including a staggering testimonial from WETA.

Six years after seeing Return of the King, we finally get to immerse ourselves in the world of Tolkien again.

Posted by Arborfield at 8:24 pm No comments: