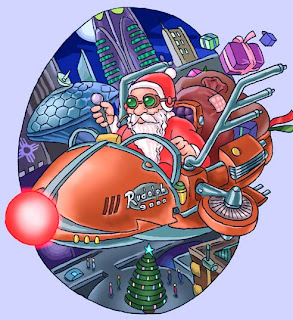 Joy (then) Gresham at her second meeting (September 1952) with Jack and Warnie, on being given a single glass of sherry before their meal, “I call this civilized. In the States, they give you so much hard stuff that you start the meal drunk and end with a hangover.” She attacked modern American literature... “Mind you, I wrote that sort of bunk myself when I was young.” Small farm life was the only good life", she said. Jack spoke up then. Saying that, on his father’s side, he came from farming stock, “I felt that,” she said. “Where else could you get the vitality?”

George Sayer, ‘Jack: C.S. Lewis and His Times’
Posted by Arborfield at 9:56 am No comments: 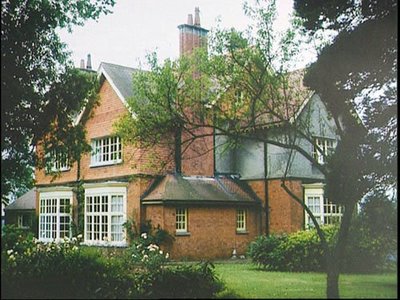 MARIAN VAN TIL (Associate Editor, Christian Courier, St. Catharines, Ont./Lewiston, NY) writes in MERELEWIS:
Long ago I saw a minute or two of a filmed version of him reading in a BBC studio but I didn't recall the voice. I expected him to sound slightly more Irish. It took some getting used to to match the voice and the face/personality that we've come to know.
The voice, at first hearing, is one of those perennial snobbish-sounding, upper-crust British accents that everyone likes to imitate. I can understand why Lewis was apparently taken aback and said he didn't like the way he sounded when he heard himself on tape for the first time.
Very, very ‘Oxford.’ But then you begin to hear other nuances. In fact, I kept thinking: 'Who does he sound like?' There's an actor who pronounces some of his words like that, and has a similar vocal quality. I finally had it: that actor is Sean Connery. I can't explain that in terms of the origins of and influences on their accents, obviously, but there are some definite similarities.
Another interesting tidbit: Lewis pronounces the word "supposed"/"supposal" (which he used frequently when speaking of Williams) with interior "b's" rather than "p's."
DOUGLAS GRESHAM responded:
'Its more of a subdued labial-stopped "p" than a "b", and it sounds more pronounced in recordings (particularly if the quality isn't the best) than it did in real life. It was almost the only shadow of Northern Ireland that years of Public School and Oxford had left in Jack's accent.'
JAMES O'FEE added:
'Ulster, and Belfast, speech is strongly influenced by Scottish patterns. (This might explain the resemblance with the speech of Scotsman Sean Connery.)

The 'rolled', or 'trilled', R occurs in several varieties of British speech, notably Scots. Yet I confess that I can find little Irish, or Ulster, in the recordings of Lewis that I've heard. Nor a rolled R.'

DOUGLAS GRESHAM replied:
I never heard Jack roll or trill (not the same thing by the way) an "R" at all. And as you say there was barely a trace of Ulster left in his accent. Though of course both he and Warnie could put it on when humour required.

[Lewis] 'was once on a committee with [T. S.] Eliot to revise the translation of the Psalms and referred to himself, in comparison with Eliot, as a "whippersnapper" - pronounced very Irish, with aspirated initial WH with strongly rolled Rs.'

Posted by Arborfield at 8:07 am No comments: