What Happened to the Rings and Who Held Them? 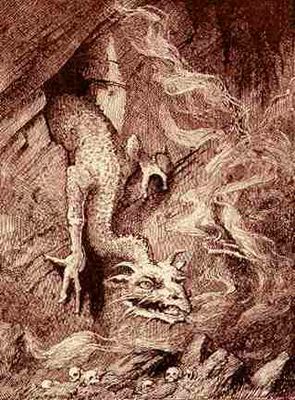 For a brief time, all the Rings of Powers were presumably worn and used in Eregion between the time Sauron left the Elves after the rings were made (1590 SA) and when Sauron forged the One Ring (1600 SA). But as soon as Sauron put on the One Ring, the Elves took off all their rings for they finally saw through the deceptions of Sauron and realized that their creations would only be corrupted and used for evil:

"But the Elves were not so lightly to be caught. As soon as Sauron set the One Ring upon his finger they were aware of him; and they knew him, and perceived that he would be master of them, and of all that they wrought. Then in anger and fear they took off their rings."
[The Silmarillion].

Some counselled that their rings be destroyed but the Elves could not bring themselves to destroy the Rings -- and so they were hid. The Seven and the Nine were separated. Of the Three, Celebrimbor gave one, Nenya, to Galadriel, and the other two, Vilya and Narya, to Gil-galad. In turn, Gil-galad kept Vilya and gave Narya to Cirdan of the Grey Havens to hold. An alternate to this version states that during the first Council of the Second Age, it was deemed wise that Elrond receive the ring Vilya and Gil-galad kept Narya until departing to war in the Last Alliance.

Angered that his plan was revealed and failed, Sauron made war on the Elves to claim the Rings without his help they could not have made. He laid Eregion to waste and sacked the Elvish city of Ost-in-edhil. He then captured and tortured Celebrimbor into revealing where the Rings were hidden:

Using Celebrimbor's body as a battle standard on a pole, Sauron returned with war and overran all of Eriador in search for the Three Elven Rings. But he never found them and only suspected where they were hid. With the help of the Numenoreans, Sauron was finally driven out of Eriador c. 1701 Second Age and there was peace for a long while.

Sauron's power was later challenged by the Numenoreans and he was taken back as prisoner where through the use of the One Ring he corrupted them and incited them to rebel against the Valar. Then Iluvatar was called on and the world was changed and Numenor drowned in the ocean. Sauron went down as well, but his spirit fled (with the Ring) back to Middle-earth. When he took shape again he saw how the Numenoreans had grown in strength where their new kingdoms sprang up. He resolved to make war and drive them out before they became too strong. Then the Last Alliance was formed between Elves and Men to battle Sauron. There, before the Black Tower, Barad-dur, Sauron was thrown down and vanquished in the year 3441 Second Age.

But after a respite, Sauron's spirit appeared again in the Third Age and threatened the free people in Middle-earth. Around the year 1000 Third Age the Istari, or Wizards, came to Middle-earth to help in the struggle against Sauron. Last to come was Gandalf and Cirdan was moved to give Narya to Gandalf as he saw that it would be put to better use:

"Take now this Ring, he said; for thy labours and thy cares will be heavy, but in all it will support thee and defend thee from weariness. For this is the Ring of Fire, and herewith, maybe, thous shalt rekindle hearts to the valour of old in a world that grows chill."
[The Silmarillion]

So at the time of the story of Lord of the Rings, the Three Elven Rings were in the hands of the Wise; Gandalf, Elrond, and Galadriel, the Nine Sauron held, as well as four of the Seven (the other three were consumed by dragons), and the One was in the hands of Frodo the Hobbit.

Why were the Rings of Power Made, and what were their Powers? 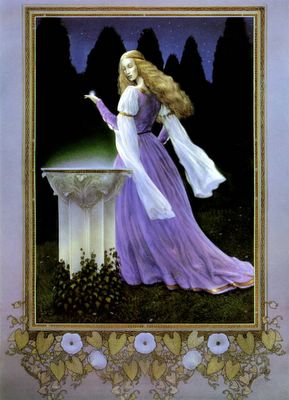 The reason is tied to the regret the Elves had for the passage of time. The Elves were immortal and were fated to live as long as Middle-earth lasted. As such, the earth changed with the passage of time, and the Elves saw many things that were fair become destroyed and lost by the hurts of evil. Sauron, as tempter, awoke a desire in the hearts of Elves to heal the hurts of the earth and create a paradise on this side of the sea to compare to Valinor -- and to be its rulers; whereas in Valinor they were only subjects and below the Valar. The Rings of Power were primarily made to slow the passage of time and preserve their creations of beauty. Yet they had other powers as well.

Tolkien provides a revealing insight on to the nature of the Rings and their powers in one of his letters:

"The chief power (of all the rings alike) was the prevention or slowing of decay (i.e. 'change' viewed as a regrettable thing), the preservation of what is desired or loved, or its semblance - this is more or less an Elvish motive. But also they enhanced the natural powers of a possessor - thus approaching 'magic', a motive easily corruptible into evil, a lust for domination. And finally they had other powers, more directly derived from Sauron... such as rendering invisible the material body, and making things of the invisible world visible."
[The Letters of J.R.R. Tolkien #131]

The Rings were not made as instruments of war or domination; they could not create lightning bolts or hail storms. Yet, they conferred powers commensurate with that of the user; a Great Ring in the hands of a weak and lesser person could not work effects to the extent of the wise or great. Notice Galadriel's words to Frodo in Lothlorien:

"Did not Gandalf tell you that the rings give power according to the measure of each possessor? Before you could use that power you would need to become far stronger, and to train your will to the domination of others."
[The Fellowship of the Ring]

The Elves used the Three Rings to create "islands of timeless beauty" and guard them against the passage of time and evil. Their use can be seen at work at various points:

~ Elrond used the power of his ring, Vilya, to cause the flood
of the river Bruinen when the Nazgul tried to capture Frodo.

~ Galadriel used the power of her ring, Nenya, to keep a guard
on Lothlorien so that none could enter without her leave.

~ Gandalf used the power of his ring, Narya, to kindle the hearts
and spirits of the enemies of Sauron to do great deeds. And quite
possibly to assist him in his battle to the death with the Balrog.

But the use of the Elven Rings was possible only after Sauron was defeated in the Second Age and his Ring taken and assumed lost. If Sauron regained the One, then all the works of the Elves and the use of their Rings would be subject to the evil will of Sauron.

Posted by Arborfield at 7:10 pm No comments:

How many Rings of Power were Made? 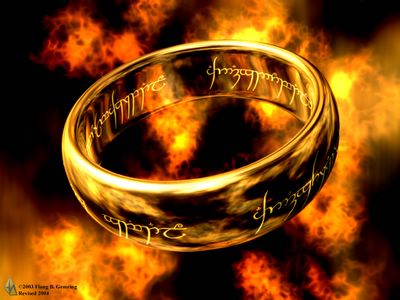 The verse in the Lord of the Rings makes explicit reference to 20 Rings of Power:

These are the Rings of Power made in the Second Age and concern the events of the Third Age.

Posted by Arborfield at 4:46 pm No comments: 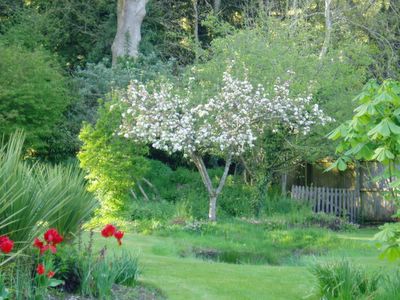 Posted by Arborfield at 7:20 am No comments: 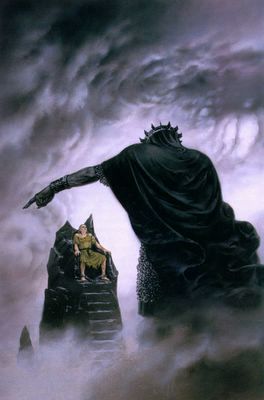 Then Thalion was thrust to Thangorodrim,
that mountain that meets the misty skies
on high o'er the hills that Hithlum sees
blackly brooding on the borders of the north,
To a stool of stone on its steepest peak
they bound him in bonds, an unbreakable chain,
and the Lord of Woe there laughing stood,
then cursed him for ever and his kin and seed
with a doom of dread, of death and horror.
There the mighty man unmoved sat;
but unveiled was his vision, that he viewed afar
all earthly things with his eyes enchanted
that fell on his folk- a fiend's torment. 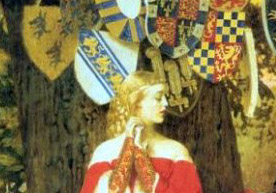 The Archbishop answered the lords;
his words went up through a slope of calm air:
'Might may take symbols and folly take treasure,
and greed bid God, who hides himself for man's pleasure
by occasion, hide himself essentially: this abides -
that the everlasting house the soul discovers
is always another's; we must always lose our own ends;
we must always live in the habitation of our lovers,
my friend's shelter for me, mine for him.
This is the way of this world in the day of that others';
make yourselves friends by means of the riches of iniquity,
for the wealth of the self is the health of the self exchanged.
What saith Heracleitus? - and what is the City's breath? -
dying each other's life, living each other's death.
Money is a medium of exchange.' 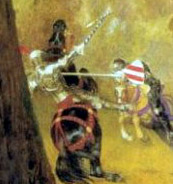 Posted by Arborfield at 7:25 pm No comments: 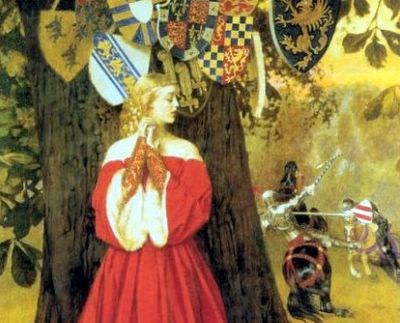 They had the coins before the council.
Kay, the king's steward, wise in economies, said:
'Good; these cover the years and the miles
and talk one style's dialects to London and Omsk.
Traffic can hold now and treasure be held,
streams are bridged and mountains of ridged space
tunnelled; gold dances deftly across frontiers.
The poor have choice of purchase, the rich of rents,
and events move now in a smoother control
than the swords of lords or the orisons of nuns.
Money is the medium of exchange.