Next Tuesday is the big day. From the 1st December ‘Born of Hope’ will be available to view here: http://www.bornofhope.com/ .

A scattered people, the descendents of storied sea kings of the ancient West, struggle to survive in a lonely wilderness as a dark force relentlessly bends its will toward their destruction. Yet amidst these valiant, desperate people, hope remains. A royal house endures unbroken from father to son.

This hour long original drama is set in the time before the War of the Ring and tells the story of the Dúnedain, the Rangers of the North, before the return of the King. Inspired by only a couple of paragraphs written by Tolkien in the appendices of the Lord of the Rings we follow Arathorn and Gilraen, the parents of Aragorn, from their first meeting through a turbulent time in their people's history.
Posted by Arborfield at 9:27 pm No comments: 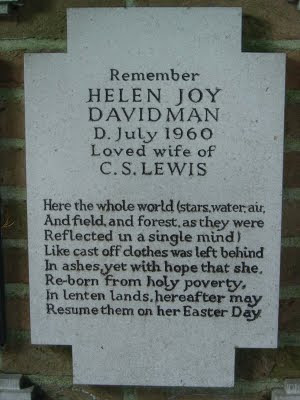 In the Oxford Crematorium... off the ring-road at Headington, and just outside the furthest chapel from the entrance... there is a small plaque on the wall. It was placed there at the behest of C.S. Lewis following the death of his beloved wife Joy Davidman. It reads: "Remember Helen Joy Davidman (loved wife of C. S. Lewis). Here the whole world (stars, water, air and field, and forest, as they were reflected in a single mind) like cast off clothes was left behind in ashes, yet with hope that she, reborn from Holy poverty, in Lenten lands, hereafter may Resume them on her Easter Day."
Posted by Arborfield at 7:21 am No comments:

A visit to 'The Kilns' 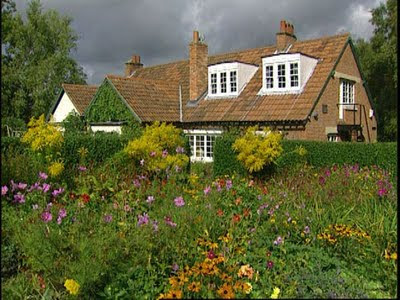 [The Kilns in summer]
The house now stands in Lewis Close, surrounded by houses, but still abutting the beginning of the Shotover woods. In Warnie's words, "the house… stands at the entrance to its own grounds at the northern foot of Shotover at the end of a narrow lane, which in turn opens off a very bad and little used road, giving as great privacy as can reasonably be looked for near a large town." The two men were not recluses, of course. But for people whose professions required frequent interaction with any number of colleagues and students, it was refreshing to be able to return home to their sanctuary, of which Lewis wrote to a friend, "I never hoped for the like."

A local Naturalist's Trust has acquired the woodland and pond to the north of the Kilns, but unfortunately they are in a sorry state. The pond is stagnant with all sorts of rubbish dumped in it, and the woodland is in great need of proper management. The site is a pale reflection on what originally attracted Jack and Warnie to the site.

The Kilns now stands in the Oxford suburbs, at the head of ‘Lewis Close’, but the path to Shotover that runs to the right of the old pond -- originally properly constructed by Jack and Warnie -- their ‘public works’ -- is still in use.
Posted by Arborfield at 8:27 am No comments: 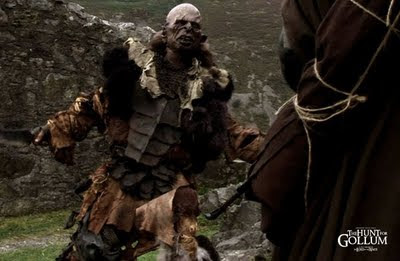 Another still from The Hunt for Gollom. The story is an expansion of the report given to the Council of Elrond in LotR of Aragorn and Gandalf's search, over the previous years, for the previous carrier of the ring. If you remember, they were afraid that Gollum might be captured by agents of Mordor as he knew the name 'Bilbo Baggins'. Their fears were of course realised.

Posted by Arborfield at 7:13 am No comments:

The Hunt for Gollum 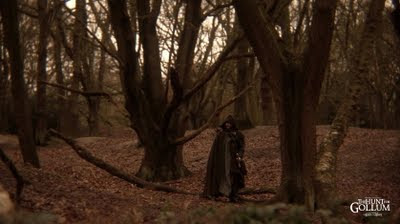 OK, I know that fan movies are not exactly the real purpose of this weblog, but sometimes exceptions have to be made. The Hunt for Gollum was released (internet only) in May 2009, and must be seen to be believed. Made by fans for fans of LotR, it is quite astounding that its total budget was £3,000. A triumph! http://www.thehuntforgollum.com/

This how one reviewer put it:

The Hunt for Gollum is testament to what can be accomplished with a good idea, a good story, and a bunch of people who believe in something enough to work on it for free. Any Lord of the Rings fan should go to the film's website and take a look. This isn't merely a good film for its budget; it's a good film, period.

And for another visit into Tolkien’s world, very soon we will be able to see Born of Hope:
1st December is the internet release date for the epic fan movie. The hour long film shows the struggle of Aragorn's parents, and from the trailers it will be one amazing ride into the history of Middle Earth. You can find information about it here: http://www.bornofhope.com/
Posted by Arborfield at 7:14 am No comments: 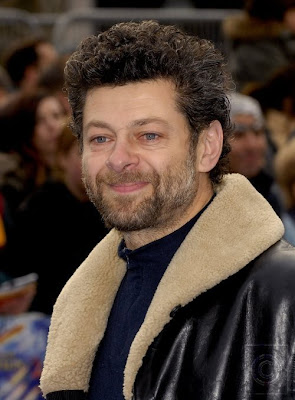 One of the real successes of the Lord of the Rings movies was Andy Serkis vocalisation of Gollum. Here he is again, in an audio drama of C.S. Lewis' book "The Screwtape Letters". Just click on the title above...
.
Don't think, "Oh, just another ruination of Lewis' work", this has to be seen. (Including comments from Douglas Gresham). Quite breathtaking.
Posted by Arborfield at 8:16 am 3 comments: 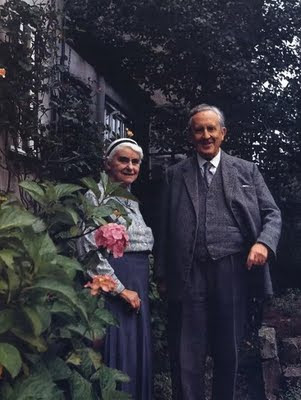 Nearly all marriages, even happy ones, are mistakes: in the sense that almost certainly (in a more perfect world, or even with a little more care in this very imperfect one) both partners might be found more suitable mates. But the real soul-mate is the one you are actually married to."

The birth of Elanor the Fair 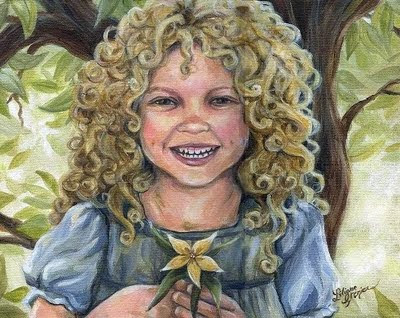 (from the appendices - LOTR)
J.R.R. Tolkien
Posted by Arborfield at 9:03 am No comments: