Lewis on the death of Charles Williams 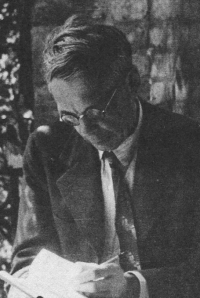 "You will have heard of the death of my dearest friend, Charles Williams and, no doubt, prayed for him. For me too, it has been, and is, a great loss. But not at all a dejecting one. It has greatly increased my faith. Death has done nothing to my idea of him, but he has done - oh, I can't say what - to my idea of death. It has made the next world much more real and palpable. We all feel the same. How one lives and learns".

(excerpt from a letter to Sister Penelope CSMV, May 28th, 1945)
C.S. Lewis - Collected Letters, Volume II
Posted by Arborfield at 7:40 am No comments:

Frodo in a World of Boromirs (final)

The pull of liberty is strong, but only for those who know it and treasure it. After decades of public education designed more to produce compliant subjects and beneficiaries than thinking, self-reliant citizens, there are precious few among us who can even articulate, let alone defend, the principles for which our founders bled and died. There are far more (and especially the well-meaning religious) who say, as Gandalf says of the One Ring, "Yet the way of the Ring to my heart is by pity, pity for weakness and the desire of strength to do good." In their pity and all too sincere desire to do good, they do not see the end of that road as Gandalf does: "With that power I should have power too great and terrible. And over me the Ring would gain a power still greater and more deadly."

Is there hope? Yes. There is always hope. Whatever its imperfections and excesses and absurdities, liberty is always better than coercion. Sooner or later this always seems to become apparent. When it does, men and women ready to take a stand for liberty always seem to spring from the earth. Perhaps that moment is again near. If so, it will not be the last. There is no final battle for liberty in a fallen world. As Tolkien reminds us (again in the words of Gandalf), "Always after a defeat and a respite, the Shadow takes another shape and grows again."
Kurt Luchs - First Things
Oct 27, 2008
Posted by Arborfield at 7:44 am 1 comment:

Frodo in a World of Boromirs (IV) 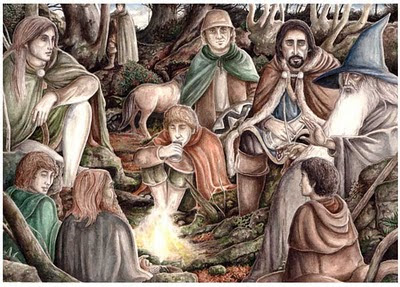 Image: Peter Xavier Price
To anyone who loves liberty as our Founders did the difference between the two major parties -- always slim -- has become invisible. Democrats and Republicans may disagree slightly on the structure and parameters of programs and how much money to pour into each. They no longer disagree on whether government should have its long fingers in everything.

It is no longer shameful to lust after power so long as one lusts for the good of the people. In the words of Boromir, speaking of the One Ring, "For you seem to think of its power only in the hands of the enemy: of its evil uses not of its good." The only rejoinder, in Frodo's words to Boromir, is that "we cannot use it, and what is done with it turns to evil." Yes, it's that simple. And as you ascend the levels of authority, from city to state to nation, it only becomes more true.

There are several reasons. One, already alluded to, is the corruption of power. No matter for what noble ends power may be sought, at some point it always becomes an end in itself, and then the jig is up… but the power and its abuses live on. This is why even the most flagrantly failed government programs are nearly impossible to kill.

The result is government programs that clumsily and ineptly ape the market, with none of its efficiencies and never coming close to achieving consumer satisfaction. A government program must be counted a success if it does not achieve the exact opposite of its stated goal.

Whatever it does achieve comes at a terrible cost. If you include all forms of taxation, government confiscates about 40 to 50 percent of our income every year. What we receive for this robbery in goods and services is a pretty poor trade by any measure. Our schools turn out ill-mannered ignoramuses by the millions, many of them not fit for anything but Congress. Our health care system is a shell game where Peter is robbed and Paul doesn't even get paid. Our social security system is a transparent Ponzi scheme that, if perpetrated by an individual, would earn him life in prison. The U.S. Treasury is the world's greatest counterfeiter, inflicting on us an invisible form of taxation called inflation.

Frodo in a World of Boromirs (III) 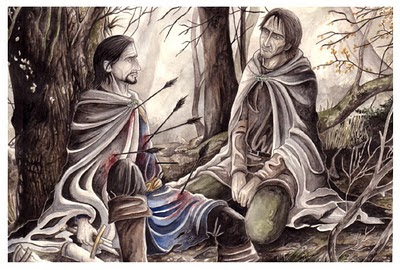 Was Frodo less resistant to the temptations of power than America's greatest president? No, not Reagan, or FDR, or Lincoln, or even Jefferson. Washington: the only President who was ever offered a lifelong throne and turned it down for a temporary desk in a bureaucrat's office. Almost to a man, his successors have been offered that same desk and have mistaken it for a throne. The current occupant, however sincere, is no exception (nor does it matter what month this is published or what year you read it). Roosevelt II -- as H.L. Mencken aptly called FDR -- actually tried to get a throne for himself, or the next best thing in a democracy, a permanent presidency. He came frighteningly close to succeeding before death intervened. The Onion's book Our Dumb Century contains a headline I contributed to sum up this absurdity: "Roosevelt's Remains To Run For Fifth Term."

In a year of partisan bitterness and economic havoc, it is well to recall that not every step is forward, not every change is for the better. Our Founders knew this. They grasped the truth of Lord Acton's words -- “Power corrupts, and absolute power corrupts absolutely" -- long before he wrote them. They understood, along with Thomas Paine: "That government is best which governs least." And to our everlasting blessing, they did their best to enshrine that precept into a system made to preserve it. They tried to create a government whose various powers were strictly limited and balanced, a government directly answerable to the people, in whom all rights and powers were ultimately held to reside. Their effort was heroic, and for a time, so were the results.

Looking at our current plight one could say they failed us. But the truth is, we have failed them. We have forgotten and abandoned nearly every principle they stood for. Where our Founders saw very little that government could do, and even less that it should do, we see no area of life in which government should not be involved. Too often we see government as the leader, all-knowing, all-providing, all-powerful. The worse the crisis, the more frantically and counter-intuitively we seek government solutions. Just now we are suffering through a government-generated economic debacle from which (we are assured) only government can save us. (to be continued)

Frodo in a World of Boromirs (II) 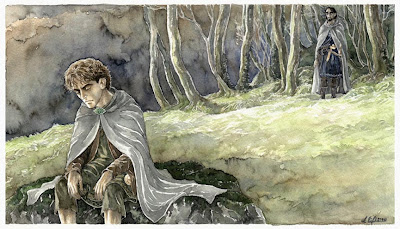 Image: Peter Xavier Price
Boromir, you'll recall, is the Judas of the Fellowship of the Ring. Sworn to protect Frodo the Ring-bearer with his life if need be, Boromir betrays his trust and tries to take the Ring by force, thereby sundering the Fellowship. Tellingly, all of this is done for the best of motives in Boromir's eyes. He means to accomplish nothing but good with the Ring, to save his beloved kingdom of Minas Tirith from Sauron's conquering armies.

In one of their own satires on power, The Giant Rat of Sumatra, the audio comedy troupe the Firesign Theatre speaks of "a power so great, it can only be used for good or evil." This is Boromir's tragically mistaken view of the One Ring. Though masking an unchecked power, the Ring is, for Boromir, only a tool -- something no better or worse than the person who uses it. He seems almost unaware of the Ring's dark side. Insofar as he is aware, he dismisses it out of hand, swearing, "True-hearted Men, they will not be corrupted." Like any politician lobbying for his favourite cause – himself -- he supplies a noble motive: "We do not desire the power of wizard-lords, only strength to defend ourselves, strength in a just cause." He also supplies a noble champion. Guess who? He muses, "What could not a warrior do in this hour, a great leader?" Nor should Frodo have any fear that Boromir will succumb to the Ring's blandishments because, as he vows, "I give you my word that I do not desire to keep it."

Yet keeping or not keeping such power is not the main issue. Merely to desire it is to show oneself unworthy of it even for a moment. It is no accident that the Ring comes to a humble bearer who in no way has sought it and who wants no part of it. In the end it proves too much even for Frodo. (to be continued)

Frodo in a World of Boromirs (I) 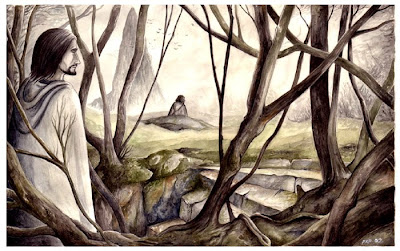 (Written from an American point of view, but very interesting indeed from a British perspective too)

One mark of a great metaphor is that it functions on several levels. In this respect J.R.R. Tolkien's Lord of the Rings can be, and has been, interpreted to mean any number of things by its central metaphor of "One Ring to rule them all." The battle over the Master-ring some have read as an allegory of the battle between the Allied and Axis powers in World War II. Christians may find in it a mirror of the battle between Satan and God; socialists (and communists), a re-enactment of the class war between capitalists and the working masses; environmentalists, a saga about the clash between industrialization and nature. Still others take it simply as a rousing tale so fine in the telling that these other possible layers of meaning become moot, or at least secondary.

Perhaps all of these views are valid; perhaps none are. That is the measure of how deeply and carefully Tolkien wrought his magic.

For me the Dark Lord's terrible ring holds another meaning, one that might serve as a warning for any age, but particularly, I fear, for our own. I see in it the lure of political power, specifically the ultimate power of the modern nation-state. And I must admit, even in trying to discuss this concept with most of those nearest and dearest to me, I feel like Frodo in a world of Boromirs. (to be continued) 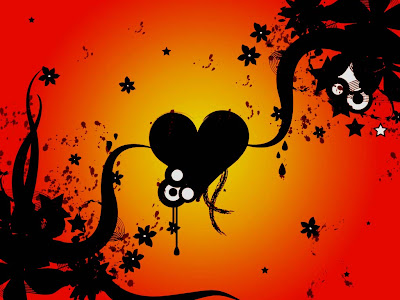 To love at all is to be vulnerable. Love anything and your heart will be wrung and possibly broken. If you want to make sure of keeping it intact you must give it to no one, not even an animal. Wrap it carefully round with hobbies and little luxuries; avoid all entanglements. Lock it up safe in the casket or coffin of your selfishness. But in that casket, safe, dark, motionless, airless, it will change. It will not be broken; it will become unbreakable, impenetrable, irredeemable. To love is to be vulnerable.