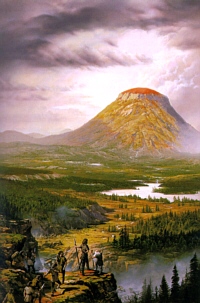 Then suddenly there was a rock-wall before them, flat-faced and sheer, forty feet high, maybe, but dusk dimmed the sky above them and guess was uncertain.
'Is this the door of your house?' said Turin. 'Dwarves love stone, it is said.' He drew close to Mim, lest he should play them some trick at the last.
'Not the door of the house, but the gate of the garth,' said Mim. Then he turned to the right along the cliff-foot, and after twenty paces he halted suddenly; and Turin saw that by the work of hands or of weather there was a cleft so shaped that two faces of the wall overlapped, and an opening ran back to the left between them. Its entrance was shrouded by long trailing plants rooted in crevices above, but within there was a steep stony path going upward in the dark.  Water trickled down it, and it was dank.
One by one they filed up. At the top the path turned right and south again, and brought them through a thicket of thorns out upon a green flat, through which it ran on into the shadows. They had come to Mim's house, Bar-en-Nibin-noeg, which only ancient tales in Doriath and Nar-gothrond remembered, and no Men had seen. But night was falling, and the east was starlit, and they could not yet see how this strange place was shaped.
Amon Rudh had a crown: a great mass like a steep cap of stone with a bare flattened top. Upon its north side there stood out from it a shelf, level and almost square, which could not be seen from below; for behind it stood the hill-crown like a wall, and west and east from its brink sheer cliffs fell. Only from the north, as they had come, could it be reached with ease by those who knew the way.
J.R.R. Tolkien
The Children of Húrin
Chapter VII - 'Of Mîm the Dwarf'
[Image: Ted Nasmith]
Posted by Arborfield at 7:55 am No comments: 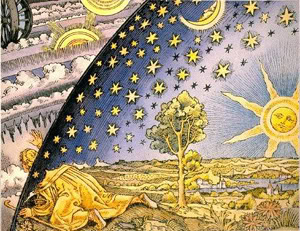 Physically considered, the Earth is a globe; all the authors of the high Middle Ages are agreed on this. In the earlier 'Dark' Ages, as indeed in the nineteenth century, we can find Flat-earthers. Lecky, whose purpose demanded some denigration of the past, has gleefully dug out of the sixth century Cosmas Indicopleustes who believed the Earth to be a flat parallelogram. But on Lecky's own showing Cosmas wrote partly to refute, in the supposed interests of religion, a prevalent, contrary view which believed in the Antipodes. Isidore gives Earth the shape of a wheel. And Snorre Sturlason thinks of it as the 'world-disc' or heimskringla --the first word, and hence the title, of his great saga. But Snorre writes from within the Norse enclave which was almost a separate culture, rich in native genius but half cut off from the Mediterranean legacy which the rest of Europe enjoyed.
The implications of a spherical Earth were fully grasped. What we call gravitation--for the medievals 'kindly enclyning'--was a matter of common knowledge. Vincent of Beauvais expounds it by asking what would happen if there were a hole bored through the globe of Earth so that there was a free passage from the one sky to the other, and someone dropped a stone down it. He answers that it would come to rest at the centre. [...]The most vivid presentation is by Dante, in a passage which shows that intense realising power which in the medieval imagination oddly co-exists with its feebleness in matters of scale. In Inferno, XXXIV, the two travellers find the shaggy and gigantic Lucifer at the absolute centre of the Earth, embedded up to his waist in ice. The only way they can continue their journey is by climbing down his sides--there is plenty of hair to hold on by--and squeezing through the hole in the ice and so coming to his feet. But they find that though it is down to his waist, it is up to his feet. As Virgil tells Dante, they have passed the point towards which all heavy objects move. It is the first 'science-fiction effect' in literature.
C.S. Lewis
The Discarded Image, "Earth and her Inhabitants" (1964)
Posted by Arborfield at 8:02 am No comments: 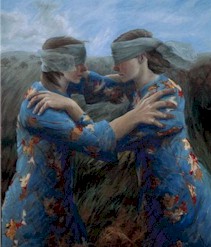 Her heart sprang; there, a good way off-thanks to a merciful God - it was, materialized from nowhere in a moment. She knew it at once, however far, her own young figure, her own walk, her own dress and hat-had not her first sight of it been attracted so? changing, growing.... It was coming up at her pace - doppelgaenger, doppelgaenger - her control began to give... two... she didn't run, lest it should, nor did it. She reached her gate, slipped through, went up the path. If it should be running very fast up the road behind her now? She was biting back the scream and fumbling for her key. Quiet, quiet! "A terrible good." She got the key into the keyhole; she would not look back; would it click the gate or not? The door opened; and she was in, and the door banged behind her. She all but leant against it, only the doppelgaenger might be leaning similarly on the other side. She went forward, her hand at her throat, up the stairs to her room, desiring (and every atom of energy left denying that her desire could be vain) that there should be left to her still this one refuge in which she might find shelter.
Charles Williams
Descent into Hell
(Ch. 1 - The Magnus Zoroaster)
Posted by Arborfield at 8:24 am No comments: 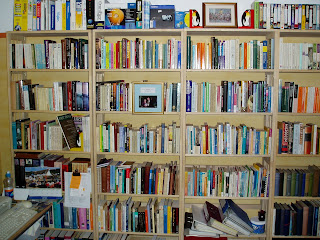 An unliterary man may be defined as one who reads books once only...
The re-reader is looking not for actual surprises (which can come only once) but for a certain surprisingness... It is the quality of unexpectedness, not the fact that delights us. It is even better the second time...in literature. we do not enjoy a story fully at the first reading. Not till the curiosity, the sheer narrative lust, has been given its sop and laid asleep, are we at leisure to savour the real beauties. Til then, it is like wasting great wine on a ravenous natural thirst which merely wants cold wetness. The children understand this well when they ask for the same story over and over again, and in the same words. They want to have again the "surprise" of discovering that what seemed Little-Red-Riding-Hood's grandmother is really the wolf. It is better when you know it is coming: free from the shock of actual surprise you can attend better to the intrinsic surprisingness of the peripeteia*.
C.S. Lewis, Of Other Worlds: Essays and Stories, "On Stories" (1947)

* peripeteia: A sudden change of events or reversal of circumstances, especially in a literary work.
Posted by Arborfield at 8:39 am No comments:

Of Fingolfin and Morgoth (Last) 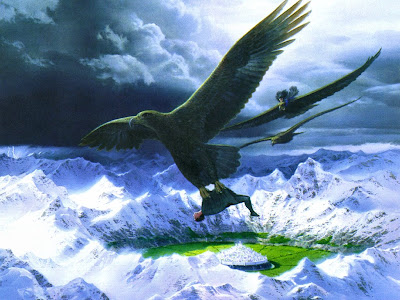 Halt goes for ever from that stroke
great Morgoth; but the king he broke,
and would have hewn and mangled thrown
to wolves devouring. Lo! From throne
that Manwë bade him build on high,
on peak unscaled beneath the sky,
Morgoth to watch, now down there swooped
Thorndor the King of Eagles, stooped,
and rending beak of gold he smote
in Bauglir's face, then up did float
on pinions thirty fathoms wide
bearing away, though loud they cried,
the mighty corse, the Elven-king;
and where the mountains make a ring
far to the south about that plain
where after Gondolin did reign,
embattled city, at great height
upon a dizzy snowcap white
in mounded cairn the mighty dead
he laid upon the mountain's head.
Never Orc nor demon after dared
that pass to climb, o'er which there stared
Fingolfin's high and holy tomb,
till Gondolin's appointed doom.


[Image: Ted Naismith]
Posted by Arborfield at 8:04 am No comments:

Of Fingolfin and Morgoth (IV) 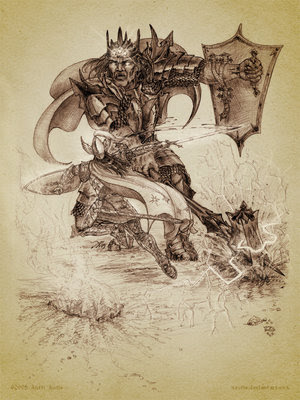 Thrice was Fingolfin with great blows
to his knees beaten, thrice he rose
still leaping up beneath the cloud
aloft to hold star-shining, proud,
his stricken shield, his sundered helm,
the dark nor might could overwhelm
till all the earth was burst and rent
in pits about him. He was spent.
His feet stumbled. He fell to wreck
upon the ground, and on his neck
a foot like rooted hills was set,
and he was crushed—not conquered yet;
one last despairing stroke he gave:
the mighty foot pale Ringil clave
about the heel, and black the blood
gushed as from smoking fount in flood.

[Image: Antti Autio]
Posted by Arborfield at 8:01 am No comments:

Of Fingolfin and Morgoth (III) 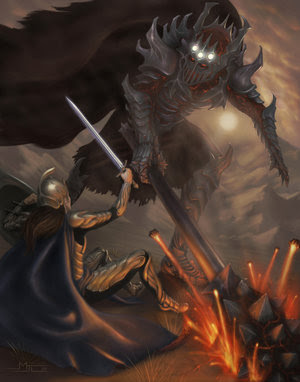 Fingolfin like a shooting light
beneath a cloud, a stab of white,
sprang then aside, and Ringil drew
like ice that gleameth cold and blue,
his sword devised of elvish skill
to pierce the flesh with deadly chill.
With seven wounds it rent his foe,
and seven mighty cries of woe
rang in the mountains, and the earth quook,
and Angband's trembling armies shook.
Yet Orcs would after laughing tell
of the duel at the gates of hell;
though elvish song thereof was made
ere this but one—when sad was laid
the mighty king in barrow high,
and Thorndor, Eagle of the sky,
the dreadful tidings brought and told
to mourning Elfinesse of old.
(lines 3,574 to 3,591)
The Geste of Beren and Lúthien
J.R.R. Tolkien
[Image: Ted Nasmith]
Posted by Arborfield at 8:16 am No comments:

Of Fingolfin and Morgoth (II) 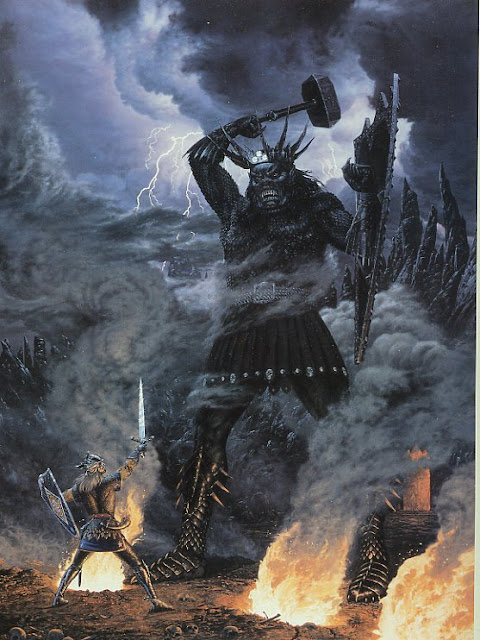