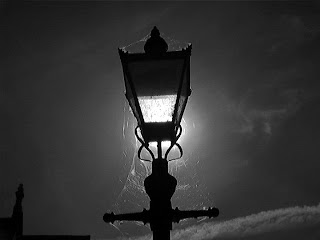 In his book, Letters to Malcolm Chiefly on Prayer, C.S. Lewis writes:
"It is no good angling for the rich moments. God sometimes seems to speak to us most intimately when he catches us, as it were, off our guard. Doesn't Charles Williams say somewhere that 'The altar must often be built in one place in order that the fire from heaven may descend somewhere else?'" (Find this in chapter XXI)
Lewis is right on both counts. First there is no use in "angling for the rich moments." God is free and will meet us at the right moments. This very often is not at our bidding, but at our most inconvenient! God often interrupts my life at the busiest of times, not the quietest. Sometimes God breaks in during very public moments, when I would rather be in charge of the moment itself. I've had this happen several times during worship lately, when I would much rather be in control of myself, than fumbling around for words, trying to gather my emotion. Most of the time I believe God intersects our lives through the most ordinary and mundane moments, when we simply are not looking in his direction. To think that we can create a moment where it will insure that God is present is thoroughly presumptuous. I've known many a pastor and worship leader who will manipulate moments and simply try to create emotion that might pass for the Spirit of God. God is not often found in these moments. The rich moments are when we are "off our guard."
But this does not mean we shouldn't be disciplined in building the altar. Lewis's quote of his friend Charles Williams is so apt. Week by week we in a sense, build the altar of worship in our churches. When we do this, it is our hope and prayer that God may meet us during this time. And for many, worship becomes a place of encounter. At its best worship can be a sign and a foretaste of heaven, where for a few moments in our week, God can reveal himself to us. Being consistent in worship is so important, not because it is the only place we're likely to meet God (that would be a pathetically short window of opportunity!), but that the disciplined 'building of the altar' makes us more open to the other times God is trying to get our attention.
So we build the altar week by week, not because we are angling for the rich moments with God, but because by so doing we are being prepared to see God's presence throughout the rest of our week. I'm reminded of Richard Foster's words in the first chapter of his now classic book Celebration of Discipline, "By themselves the Spiritual Disciplines can do nothing; they can only get us to the place where something can be done. They are God's means of grace." It is the discipline of building our altars that makes us available to the possibilities of God's intervention. If I didn't expect God to speak to me, or to act in my life at the altar, how could I conceive of God acting elsewhere? I believe what people often think of as God in the world has nothing to do with the one we meet at the altar. Often we project what we want God to be like, what we hope God to say to us and look like. But the God at the altar of our lives is quite different, the crucified Lord, Jesus himself, is nothing we could have imagined. And so at the altar our imaginations are lit, so we can see the fire elsewhere in our world.
Craig S. Williams
Orange County, California
Posted by Arborfield at 8:43 am 2 comments: 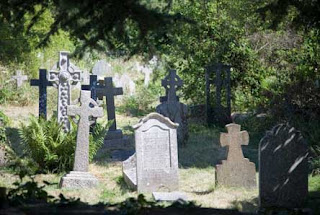 The grave of Charles Williams in an Oxford churchyard (Holywell*) is marked by a stone bearing his name and the terse description: Poet, followed by the words, Under the Mercy.
Under the Mercy is a phrase that appears frequently in his writings, as it did in his conversation. He liked to refer to the Divinity by Its Attributes: the Mercy, the Protection, the Omnipotence. In his personal life he seemed always to be clinging to the faith that, balanced as he was upon the knife-edge of his Christian allegiance in the world of myth and magic that his passion-inflamed imagination had conjured up, he would find at last, in death if by no other route, the stillness of the Love of God. It was his wife, Michal, in one of those sudden flashes of crystal-clear insight of which she was not infrequently capable, who chose the inscription on the stone. Nothing could have been more appropriate.
Lois Lang-Sims: "Letters to Lalange", page 16
(*)
Holywell cemetery is an extension of the St Cross churchyard, and is now a recognised wildlife area harbouring wood mice, foxes, pheasants, frogs, toads, butterflies, dragonflies and many birds. Snowdrops, crocuses, daffodils and summer wildflowers abound.

To wander around it is to stumble on famous names. Here is the great Walter Pater, academic, art-lover, aesthete, who died in 1934. The composer John Stainer was buried here in 1901. Here is Charles Williams, friend of Lewis and Tolkien, who died in 1945; “Under the Mercy” is his epitaph. Austin Farrer, priest, 1968. Maurice Bowra, classical scholar, warden of Wadham (I am a man more dined against than dining) 1971. John Dyson, another Inkling, 1975. Kenneth Tynan, drama critic, angry young man, 1980... and many more.
The nearby holy well was probably a pre-Christian worship site.
Posted by Arborfield at 7:46 am 1 comment:

The Lay of Leithian : XII (excerpt) 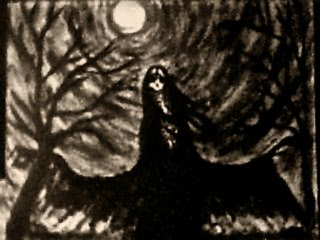 Tolkien: The Lays Of Beleriand
Posted by Arborfield at 6:56 am No comments: 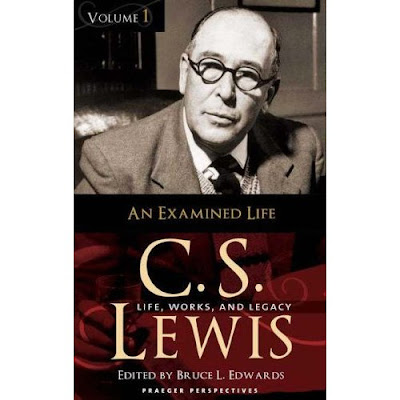 Book Description
Most popularly known as the author of the children's classic The Chronicles of Narnia, C. S. Lewis was also a prolific poet, essayist, novelist, and Christian writer. His most famous work, The Lion, the Witch, and the Wardrobe, while known as a children's book is often read as a Christian allegory and remains to this day one of his best-loved works. But Lewis was prolific in a number of areas, including poetry, Christian writing, literary criticism, letters, memoir, autobiography, sermons and more. This set, written by experts, guides readers to a better understanding and appreciation of this important and influential writer. Clive Staples Lewis was born on November 29, 1898, in Belfast, Northern Ireland. His mother died when he was young, leaving his father to raise him and his older brother Warren. He fought and was wounded in World War I and later became immersed in the spiritual life of Christianity. While he delved into the world of Christian writing, he did not limit himself to one genre and produced a remarkable oeuvre that continues to be widely read, taught, and adored at all levels.

As part of the circle known as the Inklings, which consisted of writers and intellectuals, and included J.R.R. Tolkien, Charles Williams, and others, he developed and honed his skills and continued to put out extensive writings. Many different groups now claim him as their own: spanning genres from science fiction to Christian literature, from non-fiction to children's stories, his output remains among the most popular and complex.

Here, experts in the field of Lewis studies examine all his works along with the details of his life and the culture in which he lived to give readers the fullest complete picture of the man, the writer, and the husband, alongside his works, his legacy, and his place in English letters.

About the Author
BRUCE L. EDWARDS is Professor and Associate Dean at Bowling Green State University. His works include The C. S. Lewis Readers Encyclopedia, for which he served on the editorial board and wrote 25 entries, The Taste of the Pineapple: Essays on C. S. Lewis as Critic, Reader, and Imaginative Writer.

All four volumes are to be published on 30th April 2007 by Praeger Press (USA)
Posted by Arborfield at 8:06 pm No comments:

Descent into Hell - a review 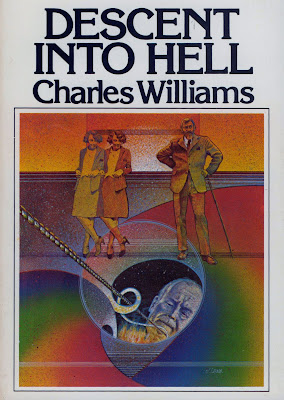 Charles William's is the real thing. He had an influence on CS Lewis as one of the Inklings (Tolkien, Lewis and Williams are probably the three best known members of the group). Genius though he was, Williams has been overshadowed by Tolkien and Lewis, and forgotten by the general reader. Nevertheless his books are worth investigating if this offering is anything to go by, containing as it does a wealth of (at times explosive) imagery. It focuses on two characters in particular -- Pauline Anstruther and Laurence Wentworth. The story centres on the production of a play by a poet called Peter Stanhope.

One of the actors, Pauline Anstruther, an intelligent, alert and rather bitter young woman, has been haunted from childhood by a doppelganger. This second self sometimes appears at a distance walking toward her, and then turns aside; it has appeared much more often in the past two years than ever before. She lives in an undertow of perpetual dread; she is terrified of the day she will meet her other self and “go mad or die.” The apparition has no discernible cause -- there is no terrifying event or series of events in childhood to which its development can be linked. The doppelganger cannot be identified as the psychic fallout of trauma; it is itself the trauma.
Peter Stanhope is the only person to whom Pauline fully confides her secret. Her grandmother, with whom she lives, has tried to find out what is troubling her, but Stanhope's friendship can presume further without damage to her privacy. On hearing her story he responds startlingly with an offer of the most apparently impossible kind of help. He suggests that someone else -- he himself, if she will consent to it - -“carry her fear.” With casual and self-deprecating logic he unfolds a method whereby the emotional burden of an experience can be assumed by a disinterested party, while the experience itself remains to be undergone.
“The thing itself you may one day meet--never mind that now, but you'll be free from all distress because that you can pass on to me” (p98).
He will imagine and fear Pauline's double, if she will relinquish the burden of the fear. For Stanhope, and for Williams, this “doctrine of substituted love” is based in Christianity -- in the substitutionary atonement and in Paul's injunction to “bear one another's burdens”.
The character of Wentworth in the story reveals how compulsive a fantasy life can become. Choosing to take to himself an insubstantial fantasy of the woman he desires, he becomes increasingly incoherent, and enclosed in himself -- finally falling into the hell of self, an abyss of non-being.
'Descent into Hell' is a tour-de-force.
(Source unknown)
Posted by Arborfield at 6:59 am 1 comment: 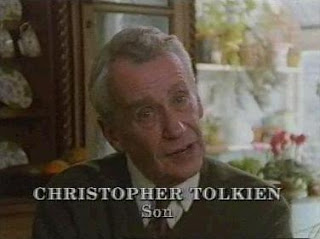 "Christopher was always much concerned with the consistency of the story and on one occasion ... interrupted: 'Last time, you said Bilbo's front door was blue, and you said Thorin had a golden tassel on this hood, but you've just said that Bilbo's front door was green, and the tassel on Thorin's hood was silver'; at which point Ronald exclaimed 'Damn the boy!' and strode across the room to make a note."
(The Tolkien Family Album, Priscilla and John Tolkien, Houghton Mifflin Co., 1992, p. 58.)
Posted by Arborfield at 7:56 am No comments: