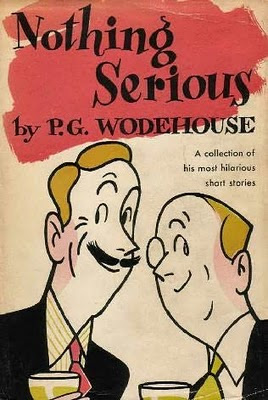 Barbara stretched out her hands, and Lionel pulled her to her feet. "I just want to shimmer up, like Jeeves, not walk," she said. "Do you like Jeeves, Mr. Persimmons?"
Jeeves?" Gregory asked. "I don't think I know it or him or them."
"Oh, you must," Barbara cried. "When I get back to London I'll send you a set."
"It's a book, or a man in a book," Lionel interrupted. "Barbara adores it."
"Well, so do you," Barbara said. "You always snigger when you read him."
"That is the weakness of the flesh," Lionel said. "One whouldn't snigger over Jeeves any more than one should snivel over Othello. Perfect art is beyond these easy emotions. I think Jeeves -- the whole book, preferably with the illustrations -- one of the final classic perfections of our time. It attains absolute being. Jeeves and his employer are one and yet diverse. It is the Don Quixote of the twentieth century."
"I must certainly read it," Gregory said, laughing. "Tell me more about it while we have tea."
War In Heaven (Eerdmans 1978), page 157-8
Charles Williams 1930
Posted by Arborfield at 8:23 am No comments:

Elizabeth Taylor's connection to the Inklings 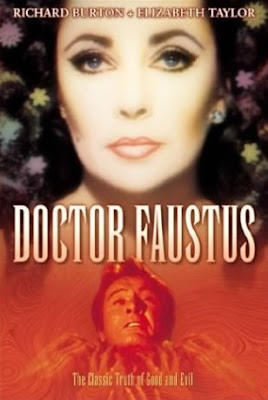 As we all know, Elizabeth Taylor died yesterday, perhaps a good time to remember her connection with one of the Inklings.

Richard Jenkins won a scholarship to the University of Oxford at just 16; he adopted his teacher's surname (Phillip Burton) and made his first stage performance in Oxford as an extra, scrubbing steps. Soon Burton's extraordinary stage presence - one of his famous trademarks - was said to distract the audience from the Shakespearean play! However, his studies at Oxford lasted only six months 1942-3.

Much later in his career, Burton co-directed (along with Inkling Neville Coghill) a labour of love that records a performance given by Burton at Oxford University in 1966 of Christopher Marlowe's 400-year-old verse play. Burton plays Faust, a medieval doctor who sells his soul to Mephistopheles in exchange for mastering all human knowledge. The Devil tempts Faust at every turn by confronting him with the seven deadly sins, and with Helen of Troy (Elizabeth Taylor), who appears throughout the film in various stages of undress.

The production was filmed in Rome, with the majority of the cast amateur actors from the University of Oxford. (I understand that a video of the movie can still be obtained).

Very interesting man Coghill...
Posted by Arborfield at 7:22 am No comments: 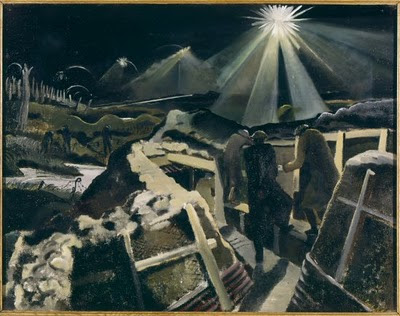 Of Tuor and his coming to Gondolin 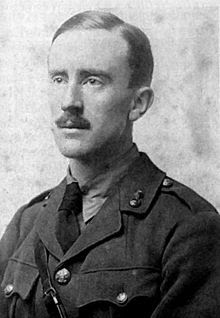 My father said more than once that "The Fall of Gondolin" was the first of the tales of the First Age to be composed, and there is no evidence to set against his recollection. In a letter of 1964 he declared that he wrote it "'out of my head' during sick-leave from the army in 1917," and at other times he gave the date as 1916 or 1916-17. In a letter to me written in 1944 he said: "I first began to write [The Silmarillion] in army huts, crowded, filled with the noise of gramophones": and indeed some lines of verse in which appear the Seven Names of Gondolin are scribbled on the back of a piece of paper setting out "the chain of responsibility in a battalion." The earliest manuscript is still in existence, filling two small school exercise-books; it was written rapidly in pencil, and then, for much of its course, overlaid with writing in ink, and heavily emended. On the basis of this text my mother, apparently in 1917, wrote out a fair copy; but this in turn was further substantially emended, at some time that I cannot determine, but probably in 1919-20, when my father was in Oxford on the staff of the then still uncompleted Dictionary. In the spring of 1920 he was invited to read a paper to the Essay Club of his college (Exeter); and he read "The Fall of Gondolin." The notes of what he intended to say by way of introduction of his "essay" still survive. In these he apologised for not having been able to produce a critical paper, and went on: "Therefore I must read something already written, and in desperation I have fallen back on this Tale. It has of course never seen the light before... . A complete cycle of events in an Elfinesse of my own imagining has for some time past grown up (rather, has been constructed) in my mind. Some of the episodes have been scribbled down... . This tale is not the best of them, but it is the only one that has so far been revised at all and that, insufficient as that revision has been, I dare read aloud."

The tale of Tuor and the Exiles of Gondolin (as "The Fall of Gondolin" is entitled in the early MSS) remained untouched for many years, though my father at some stage, probably between 1926 and 1930, wrote a brief, compressed version of the story to stand as part of The Silmarillion (a title which, incidentally, first appeared in his letter to The Observer of 20 February 1938); and this was changed subsequently to bring it into harmony with altered conceptions in other parts of the book. Much later he began work on an entirely refashioned account, entitled "Of Tuor and the Fall of Gondolin." It seems very likely that this was written in 1951, when The Lord of the Rings was finished but its publication doubtful. Deeply changed in style and bearings, yet retaining many of the essentials of the story written in his youth, "Of Tuor and the Fall of Gondolin" would have given in fine detail the which legend that constitutes the brief 23rd chapter of the published Silmarillion, but, grievously, he went no further than the coming of Tuor and Voronwë to the last gate and Tuor's sight of Gondolin across the plain of Tumladen. To his reasons for abandoning it there is no clue.

It is thus the remarkable fact that the only full account that my father ever wrote of the story of Tuor's sojourn in Gondolin, his union with Idril Celebrindal, the birth of Eärendil, the treachery of Maeglin, the sack of the city, and the escape of the fugitives - a story that was a central element in his imagination of the First Age - was the narrative composed in his youth.

Christopher Tolkien (1961) Preface to The Book of Lost Tales 2
Harper Collins
Posted by Arborfield at 7:22 am 1 comment:

'One who dreams alone' 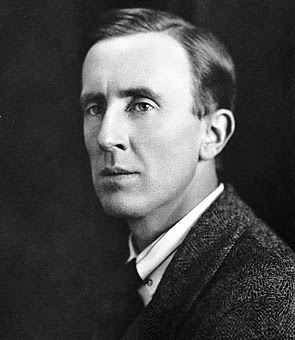 A pale, drawn man sits in a convalescent bed of a wartime hospital. He takes up a school exercise book and writes on its cover, with a calligraphic flourish: 'Tuor and the Exiles of Gondolin'. Then he pauses, lets out a long sigh between the teeth clenched around his pipe, and mutters, 'No, that won't do anymore.' He crosses out the title and writes (without the flourish): 'A Subaltern on the Somme'.

That is not what happened, of course. Tolkien produced a mythology, not a trench memoir. Middle-earth contradicts the prevalent view of literary history, that the Great War finished off the epic and heroic traditions in any serious form. This postscript will argue that despite its unorthodoxy - and quite contrary to its undeserved reputation as escapism - Tolkien's writing reflects the impact of the war; furthermore, that his maverick voice expresses aspects of the war experience neglected by his contemporaries. This is not to say that his mythology was a response to the poetry and prose of his contemporaries, but that they represent widely divergent responses to the same traumatic epoch.

Literature hit a crisis point in 1916, in the assessment of critic Samuel Hynes: 'a "dead spot" at the centre of the war' when 'creative energies seemed to sink to a low point' among British writers. G. B. Smith and his poetry were both languishing on the Somme; 'sheer vacancy is destroying me', he said. A very different writer, Ford Madox Ford, was in a similar rut at Ypres, asking himself 'why I can write nothing - why I cannot even think anything that to myself seems worth thinking'.

John Garth
Tolkien and the Great War
Harper Collins (2003)
Posted by Arborfield at 7:08 am No comments:

Venus, from 'The Planets' 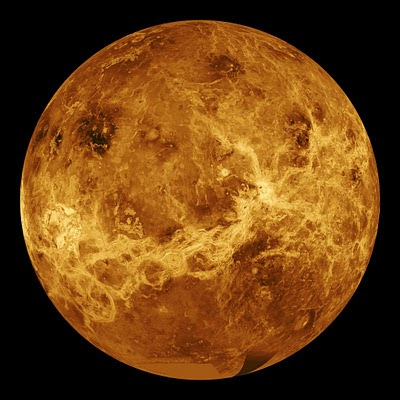 Venus voyages... but my voice falters;
Rude rime-making wrongs her beauty,
Whose breasts and brow, and her breath's sweetness
Bewitch the worlds. Wide-spread the reign
Of her secret sceptre, in the sea's caverns,
In grass growing, and grain bursting,
Flower unfolding, and flesh longing,
And shower falling sharp in April.
The metal copper in the mine reddens
With muffled brightness, like muted gold,
By her fingers form'd. Far beyond her
The heaven's highway hums and trembles,
Drums and dindles, to the driv'n thunder
C. S. Lewis, The Planets (1937)
Posted by Arborfield at 7:47 am No comments:

Saturn, from 'The Planets' 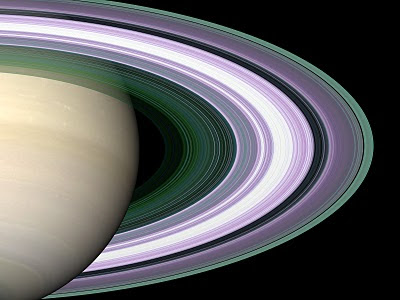 Saturn, whose name in the heavens is Lurga, stood in the Blue Room. His spirit lay upon the house, or even on the whole Earth, with a cold pressure such as might flatten the very orb of Tellus to a wafer. Matched against the lead-like burden of his antiquity the other gods themselves perhaps felt young and ephemeral. It was a mountain of centuries sloping up from the highest antiquity we can conceive, up and up like a mountain whose summit never comes into sight, not to eternity where the thought can rest, but into more and still more time, into freezing wastes and silence of unnameable numbers. It was also strong like a mountain; its age was no mere morass of time where imagination can sink in reverie, but a living, self-remembering duration which repelled lighter intelligences from its structure as granite flings back waves, itself unwithered and undecayed but able to wither any who approach it unadvised. ...