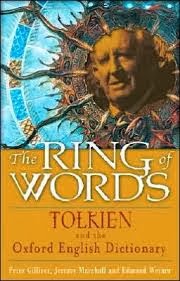 In the first chapter of The Lord of the Rings, Bilbo is about to reach the age of eleventy-one, in, 'a rather curious number', and at his birthday party, his announcement 'I am eleventy-one today' is met with cheers from the assembled guests. In English there are other invented terms for numbers representing tens, most famously umpty, which is now almost forgotten, but on which was based the very common word umpteen. It would be easy to see this as a piece of whimsical fancy based on Lewis Carroll logic: if we can count to ninety, why not eleventy?

But as always with Tolkien, the roots go deeper, and are planted in the reality of the culture of the ancient world. In Old Eng­lish, the next two tens after hund 'hundred' were hundendlufontig and hundtwelftig: the hund- was a prefix, which also occurred in hundeahtatig 'eighty' and hundnigontig 'ninety'; if we remove the prefix, we get -endlufontig 'eleventy' from endlufon or endleofon 'eleven' and -twelftig 'twelfty'. Why did the Anglo-Saxons count up to 'twelfty'? The answer lies in an ancient system of counting in twelves; much later, at the end of the Middle English period, certain commodities, such as fish, were counted in 'hundreds' that actually contained six score or 120, and this was known as the 'great hundred' or 'long hundred' (OED: hundred n. and a., sense 3). That this probably goes back to ancient times is shown by the fact that in Old Norse 100 was tiu tigir'ten tens', 110 was ellifu tigir 'eleven tens' (exactly parallel to eleventy), and 120 was hundrad 'hundred'. There are even said to be ordinal numerals titugandi and ellifu-tugandi 'tentieth' and 'eleventieth'.

Similarly, the OED shows that, from around 1400, many com­modities were reckoned by the gross (OED: gross n.3), which sig­nified 12 dozen (144). We know that the hobbits used this reckoning from another place in the same chapter, where we are told that the invitations to the special family dinner party were limited to twelve dozen, 'a number also called by the hobbits one Gross, though the word was not considered proper to use of people' — Bilbo offends his guests later in the speech already referred to, by doing just that. The party is even punningly described as 'an engrossing entertain­ment', although the sentence containing this phrase no longer con­tains the mention of  '144' present in the early draft (HMEVl. 23), so many readers miss the pun.


Tolkien is imagining, as with many other matters, that the hobbits continued a practice used by our forefathers. But he presum­ably also knew that the OED has an entry for the similarly formed word eleventeen meaning 'twenty-one', which was used by a 17th-century writer named George Wither (and also revived in a Vic­torian farce by Charles Selby in 1858}. It is also quite probable that he had come across this gloss for the Icelandic word ellefu-tiu in Cleasby and Vigfusson's Icelandic-English Dictionary (1874): '"eleventy" (i.e. one hundred and ten),,..frequent in reckoning by duodecimal hundreds'. 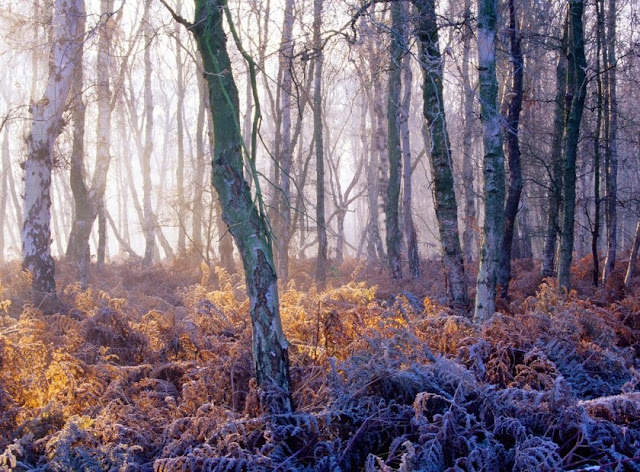 Some believe the slumber
Of trees is in December
When timber's naked under sky
And squirrel keeps his chamber.

Jack, on hearing of the acceptance for publication of "The Lord of the Rings" 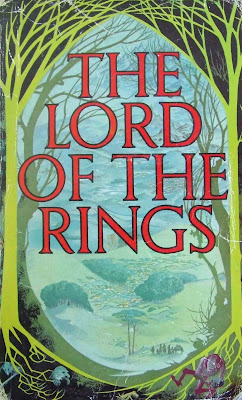 
Just a note to tell you with what agreeable warmth and weight your yesterday’s good news lies on my mind – with an inward chuckle of deep content. Foremost of course is the sheer pleasure of looking forward to having the book to read and re-read. But a lot of ther things come in. So much of your whole life, so much of our joint life, so much of the war, so much that seemed to be slipping away quite spurlos into the past, is now, in a sort made permanent.


And I am of course very glad on your account too. I think the very prolonged pregnancy has drained a little vitality from you: there’ll be a new ripeness and freedom when the book’s out. And how pleased Priscilla and Mrs. Farrer will be. God bless you.


(spurlos = without trace)
Collected Letters, Volume III (2006)
Posted by Arborfield at 9:55 am No comments:

Before the publication of 'The Hobbit' 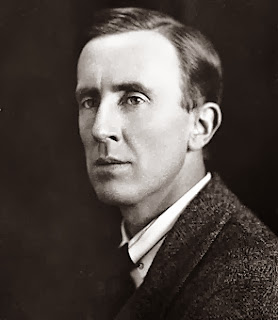 Mr Lewis of Magdalen, who reviews for the Times Literary Supplement, tells me that he has already written urging a review and claiming the book as a specialist in fairy-stories; and he is now disgruntled because he will get 'juveniles' that he does not want, while the Hobbit will not reach him until the vacation is over, and will have to wait till December to be read & written up properly.  Also if the book had been available before the university disintegrates I could have got my friend the editor of the O.U. Magazine, who has been giving it a good dose of my dragon-lore recently, to allocate it and get a review at the beginning of the autumn term.  However, I say these things too late I expect.  In any case I do not suppose it makes in the long run a great deal of difference.  I have only one personal motive in regretting this delay: and that is that I was anxious that it should appear as soon as possible, because I am under research-contract since last October, and not supposed to be indulging in exams or in "frivolities'.  The further we advance into my contract time, the more difficulty I shall have (and I have already had some) in pretending that the work belongs wholly to the period before October 1936. I shall now find it very hard to make people believe that this is not the major fruits of 'research' 1936-7! 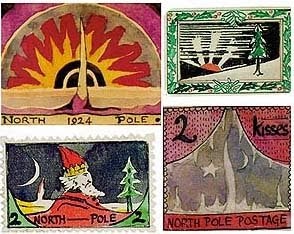 
They told wonderful tales of life at the North Pole: how all the reindeer got loose and scattered presents all over the place; how the accident-prone Polar Bear climbed the North Pole and fell through the roof of Father Christmas’s house into the dining-room; how he broke the Moon into four pieces and made the Man in it fall into the back garden; how there were wars with the troublesome horde of goblins who lived in the caves beneath the house!


Sometimes the Polar Bear would scrawl a note, and sometimes Ilbereth the Elf would write in his elegant flowing script, adding yet more life and humour to the stories.


In these letters, Father Christmas kept the Tolkien children updated with stories about the hijinks at the North Pole -- the clumsy North Polar Bear and all the things he broke, firework explosions, the discovery of ancient caves full of old cave drawings, and battles with the goblins.


When reading these letters, it's hard to imagine any luckier kids in the Christmases of the '20s and '30s. After all, how many children gets detailed letters and pictures from Father Christmas -- complete with special stamps? Tolkien's love for his kids is evident in the care he took to create these letters, and the affection that comes from "Father Christmas".


Tolkien's old-school style of writing is a bit formal and very correct, but he tosses in comments of exasperation, amusement, and in the last letter, a sort of sad resignation that children will grow up. Maybe it is because they were given to real children, and not intended for publication.


Tolkien's detailed, colourful, beautiful, intricate pictures are what make the letters come alive. You can imagine Tolkien’s children eagerly examining the pictures as well as the written words. They aren't terribly realistic -- Father Christmas never looks quite real -- but their charm makes up for it, such as the murals on Father Christmas's walls, with suns, moons, stars and trees.


Tolkien also sprinkles the stories with things that his kids were probably intrigued by, like prehistoric cave paintings, fireworks, and a comic bear who causes all kinds of mayhem. And fans of Tolkien's fantasy works will probably enjoy checking out things like the invented Elf language (as written by Ilbereth) and goblin language. Tolkien includes a letter from the North Polar Bear in his language too!


No reader, young or old, can fail to be charmed by the inventiveness and ‘authenticity’ of Tolkien’s “Letters from Father Christmas”. Seek out a copy.
Posted by Arborfield at 9:19 am No comments: 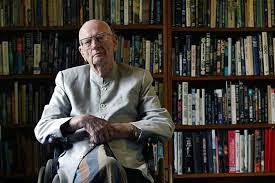 At the University of Liverpool on the occasion of his acceptance of D. Litt degree Via Satellite, 1995 Jan. 26:


"Greetings from Sri Lanka. I'm honoured and happy to be with you today, if only electronically... especially as I have several important links with your city. Although I only visited it once, three local people have had a profound impact on my life..."


"I'm indeed happy that the Foundation Library has at last found a permanent home with you, and that degrees in science fiction studies are now being granted. It's high time the UK caught up with the US-where there have been hundreds of courses! -and we recognized the importance of one of the most useful links between Snow's famous two cultures."


"And now I have a -- rather controversial -- suggestion for your degree thesis. Just recently I received an extraordinary book -- Light In the Shadowlands by Kathryn Lindskoog. Her thesis is that C.S. Lewis' posthumous books are at least partly forged. If you don't take this seriously, let me quote a testimonial from an authority you will all admire:


"A fascinating piece of detective work, which may serve to free C.S. Lewis from the shadows of a misogyny and arrogance which it appears may have been cast upon him... I finished it liking Lewis, as man and artist, better than I had ever done before.... The books' temperate, pleasant tone and elegant illustrations make it a pleasure to read." - Ursula Le Guin.


"Though I only met Lewis once, I had an extensive correspondence with him, which is now in the Bodleian Library. And I used to see Joy Gresham almost every week at our "White Horse" get-togethers, so I -- and millions of others -- would like to know if there is indeed a 'Lewisgate' scandal..."

There is another book out about the "controversial" correspondence between Arthur C. Clark and Lewis: From Narnia to a Space Odyssey : The War of Letters Between Arthur C. Clarke and C.S. Lewis . Looks like it is getting mixed reviews, however.
Posted by Arborfield at 12:14 pm No comments: 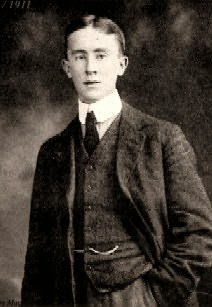 Into Merton for the "English tea" at 4.  Here there was hardly any talk of the strike.  Discussion turned on Fletcher's proposal to co-ordinate the lecture list with the ordinary course of tutorial work.  Everyone agreed, tho' Gordon spoke of the danger of making the thing too much of  "an easily running engine that can give no pleasure to anyone except the engineer".  Miss Lee talked a lot of nonsense about the need for lessons in pronunciation and beginners' "outlines of literature".

Tolkien managed to get the discussion round to the proposed English Prelim.  I had a talk with him afterwards.  He is a smooth, pale, fluent little chap - can't read Spenser because of the forms - thinks the language is the real thing in the school - thinks all literature is written for the amusement of men between thirty and forty - we ought to vote ourselves out of existence if we were honest - still the sound-changes and the gobbets are great fun for the dons.  No harm in him: only needs a smack or so.  His pet abomination is the idea of "liberal" studies. Technical hobbies are more in his line.