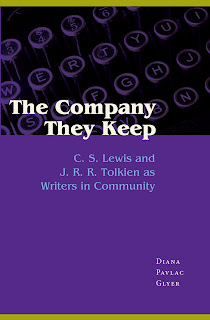 As Tolkien began his teaching career at the , he joined with his colleague E. V. Gordon to establish the Viking Club, a gathering of undergraduates devoted to reading sagas and translating songs and children's tales into Anglo-Saxon and Old Norse.  Later, when Tolkien took a position at , he founded the Coalbiters, a group that consisted not of undergraduates but college dons; as we have seen, it was through the Coalbiters that Tolkien and Lewis became friends.

Much more could be said.  Carpenter's biography of Tolkien and Garth's book on Tolkien's early years paint a compelling picture.  Tolkien's involvement in groups is impressive; his leadership in founding and developing them is significant; the extent to which his creative imagination was nurtured in them is extraordinary.  In short, participation with the Inklings was not an isolated happenstance in Tolkien's life, but rather the continuation of a long-established pattern of working with others.  Furthermore, he continued to work in a context of creative interaction even after the Inklings ceased to meet.  One particularly compelling example is Tolkien's communication with Clyde S. Kilby as he struggled to complete the work of his heart, The Silmarillion Kilby, a professor of English at , wrote to Tolkien in 1965, expressing his desire to help with The Silmarillion:

I hope you will not feel me impertinent if I make you the following offer:  Being eager to see The Silmarillion published, I should like to come over to next summer and render you any help I can. I am 1) a good typist 2) a bit of a literary critic, having written for the largest newspapers in this country 3) an enthusiast for your writings, having conducted last semester a seminar on them at my college, and 4) for many years I have been used to handling every sort of correspondence.  I mention these four rather disparate things with the notion of persuading you I could fit in somewhere, (unpublished letter, 19 November 1965).

Kilby wrote to offer practical help, professional expertise, and enthusiastic support.  Tolkien saw the need for it and accepted Kilby’s offer in a letter written on 18 December 1965: "If I had the assistance of a scholar at once sympathetic and yet critical, such as yourself, I feel I might make some of it publishable.  It needs the actual presence of a friend and adviser at one’s side, which is just what you offer" (Letters #366).  Tolkien is clearly grateful for the offer of help but even more so for the physical presence of an interested reader, a friend and adviser, a resonator who comes alongside.

Diana Pavlac Glyer
The Company They Keep
Chapter 8 – Creativity : Appreciating Interaction
Posted by Arborfield at 8:46 am No comments: 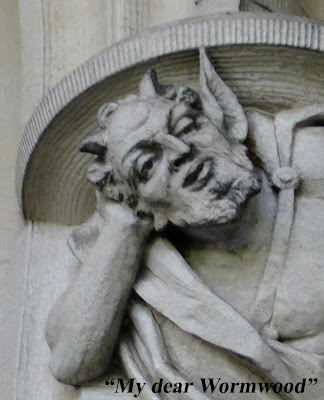 C.S. Lewis
The Screwtape Letters
Posted by Arborfield at 8:51 am No comments:

My friend of friends... 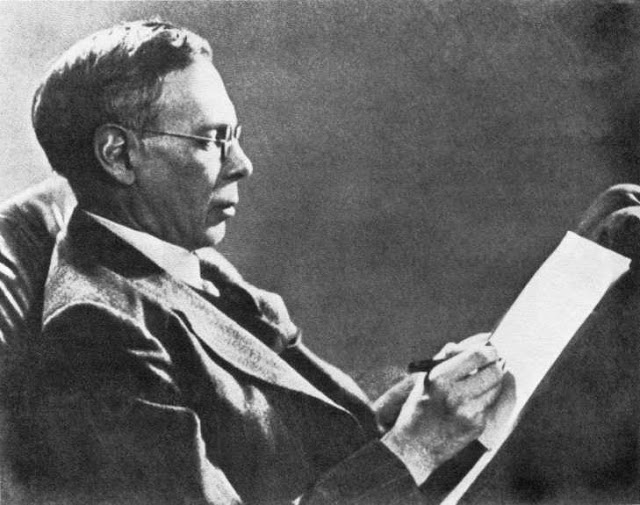 20 May 1945I also have become much acquainted with grief now through the death of my great friend Charles Williams, my friend of friends, the comforter of all our little set, the most angelic man. The odd thing is that his death has made my faith stronger than it was a week ago. And I find that all that talk about 'feeling that he is closer to us than before' isn't just talk. It's just what it does feel like — I can't put it into words. One seems at moments to be living in a new world. Lots, lots of pain, but not a particle of depression or resentment...Letters of C.S. Lewis
(edited by W.H. Lewis) 1966
Posted by Arborfield at 9:04 am No comments: 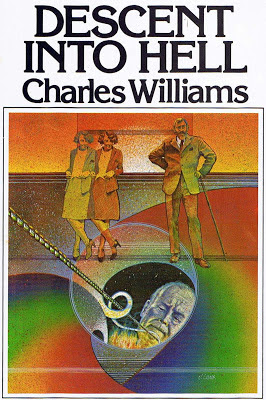 He measured out the rope to twice the length of his outstretched arms, and when the ruined city was once more silent he peered over, letting that measured section run through his hands. The end dangled much more than his height from the ground, and at that he twisted and knotted the next yard or two around the pole, straining against it, tugging it, making certain it could not ease loose. The moon emerged as he finished, and in a panic he dragged up the loose end, and shrank back from the edge, well back, so that no watcher should see him from the road. There, lying flat on his empty belly, he began his penultimate activity. He knotted, as best he could, the end of the rope about his neck, with a great and clumsy, but effective, slip knot. He tried it again and again, more fearful than ever lest its failure, because of his own, should betray him back into a life which his frenzy felt as already ghostly. He felt that he could not bear that last betrayal, for he would never have courage to repeat this mighty act of decision. The dreadful universe perhaps would spare him that, if he were careful now. He was very careful.

As, exhausted by the necessary labour, he lay flat on that stage of the spectral ascent, amid the poles and unroofed walls, he did not consider any future but unfortunate accident or fortunate death. He was almost shut up in his moment, and his hope was only that the next moment might completely close him in. No dichotomy of flesh and spirit distressed or delighted him nor did he know anything of the denial of that dichotomy by the creed of Christendom. The unity of that creed has proclaimed, against experience, against intelligence, that for the achievement of man's unity the body of his knowledge is to be raised; no other fairer stuff, no alien matter, but this to be impregnated with holiness and transmuted by lovely passion perhaps, but still this. Scars and prints may disseminate splendour, but the body is to be the same, the very body of the very soul that are both names of the single man. This man was not even terrified by that future, for he did not think of it. He desired only the end of the gutter and of the voice; to go no farther, to hear no more, to be done. Presently he remembered that time was passing; he must be quick or they would catch him, on his platform or as he fell, and if he fell into the safety of their hands he would fall into his old utter insecurity. All he knew of the comfort of the world meant only more pain. He got awkwardly to his feet; he must be quick.

He was not very quick. Something that was he dragged at him, and as he crawled to the edge dragged more frantically at something still in him. He had supposed he had wanted to die, and only at the last even he discovered that he wanted also not to die. Unreasonably and implacably, he wanted not to die. But also he wanted not to live, and the two rejections blurred his brain and shook his body. He half struggled to his feet in his agony; he twisted round and hung half over, his back to the abyss; he clutched at the rope, meaning to hold it and release it as he fell, to such an extreme of indecision pretending decision did his distress drive him, and then as the circling movement of his body ended, twining the rope once more round his neck, he swayed and yelped and knew that he was lost, and fell.

Charles Williams
Descent into Hell
Chapter 2 - Via Mortis
Posted by Arborfield at 6:37 pm No comments:

To be published this Spring...

Marking the 50th anniversary of Lewis’ death, The Intellectual World of C. S. Lewis sees leading Christian thinker Alister McGrath offering a fresh approach to understanding the key themes at the centre of Lewis’ theological work and intellectual development. Brings together a collection of original essays exploring important themes within Lewis’ work, offering new connections and insights into his theology. Throws new light on subjects including Lewis’ intellectual development, the uses of images in literature and theology, the place of myth in modern thought, the role of the imagination in making sense of the world, the celebrated ′argument from desire′, and Lewis’ place as an Anglican thinker and a Christian theologian.

Written by Alister McGrath, one of the world’s leading Christian thinkers and authors; this exceptional pairing of McGrath and Lewis brings together the work of two outstanding theologians in one volume.
Posted by Arborfield at 7:57 am No comments: 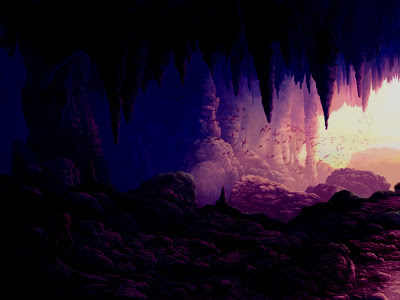 Into the vast and echoing gloom
more dread than many-tunnelled tomb
in Labyrinthine pyramid
where everlasting death is hid,
down awful corridors that wind
down to a menace dark enshrined;
down to the mountain's roots profound,
devoured, tormented, bored and ground
by seething vermin spawned of stone;
down to the depths they went alone.
The arch behind of twilit shade
they saw recede and dwindling fade;
the thunderous forges' rumour grew,
a burning wind there roaring blew
foul vapours up from gaping holes.
Huge shapes there stood like carven trolls
enormous hewn of blasted rock
to forms that mortal likeness mock;
monstrous and menacing, entombed,
at every turn they silent loomed
in fitful glares that leaped and died
There hammers clanged, and tongues there cried
with sound like smitten stone; there wailed
faint from far under, called and failed
amid the iron clink of chain
voices of captives put to pain.

Posted by Arborfield at 6:27 am No comments:

My free act contributes to the cosmic shape. 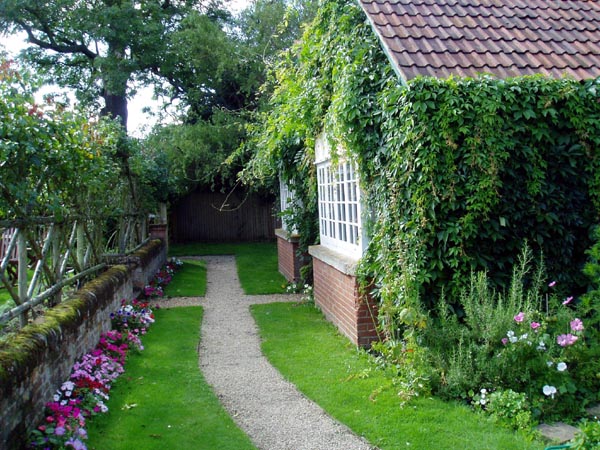 When we are praying about the result, say, of a battle or a medical consultation the thought will often cross our minds that (if only we knew it) the event is already decided one way or the other. I believe this to be no good reason for ceasing our prayers. The event certainly has been decided -- in a sense it was decided 'before all worlds'. But one of the things taken into account in deciding it, and therefore one of the things that really cause it to happen, may be this very prayer that we are now offering. Thus, shocking as it may sound, I conclude that we can at noon become part causes of an event occurring at ten a.m. (Some scientists would find this easier than popular thought does.)

[Image : The Kilns in July]
Posted by Arborfield at 8:59 am No comments: