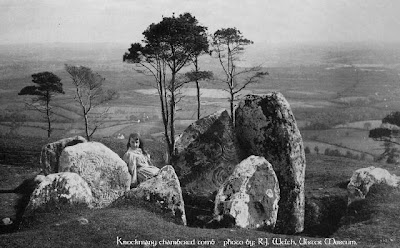 I can think of many places in Narnia which may have an Ulster background: the shape of Aslan’s How in Prince Caspian, for instance: like the round crown of a hilltop that marks a passage grave. The incised patterns on the stones have the same reference: see Knockmany, near Clougher, in Co. Tyrone. The stone structure inside the How suggests a dolmen (or portal tombs, as they’re now called); most people have seen these - perhaps at Legananny in Co. Down, or in the Giant’s Ring, south of Belfast. The caves in The Silver Chair may owe something to Belfast’s Cave Hill. The ruined city the children had to find, and the steep climbs up stone steps, suddenly brought me back to the Giant’s Causeway. When the children, under the land’s surface, see chasms which lead down to even darker and worse places, a thought of St. Patrick’s Purgatory in County Donegal flashed through my mind -- and possibly had been in the back of Lewis’s. He knew Donegal well.
Turning from the scenery to the stories themselves, we find his essay on the subject in Of This and Other Worlds interesting. He writes, " I put in what I would have liked to read when I was a child, and what I still like reading now that I am in my fifties." In other words, he is not writing down to children but from what is in himself. He chose the children’s story as the best art form for something he had to say. Lewis points out that in most places and times, fairy tales have not been exclusively for children. The appeal of the fairy tale for an author is that he may there most fully exercise his function as a ‘sub-creator’, in Tolkien’s terminology. (Jung thought fairy tales liberated archetypes.) Lewis writes that he is not sure why at a particular time he had to write fairy tales. The Narnian chronicles were probably written as relaxation in the evenings at home in the Kilns, after spending the long days and years of reading in the Bodleian library the mostly dull verse and prose of the 16th century for what he called OHEL, the Oxford History of English Literature. There were bright spots; he loved Spenser, and Shakespeare’s Sonnets and narrative poems, but he needed, as relief, to exercise what he called ‘the imaginative man’ in him as a reaction from the generally ‘dry-as-dust’ day’s reading and writing. So I think that was part of the why; he also tells us how he saw that ‘stories of this kind could steal past a certain inhibition which had paralysed much of his own religion in childhood.’ The ‘how’ was more easily answered. In Lewis’s case, he saw pictures: a faun carrying an umbrella, a queen on a sledge, a magnificent lion. His work came in fitting them together, or rather, letting Aslan the Lion pull the whole story together, ‘and soon He pulled the six other stories after Him.’
Somehow, this is very Ulster-like: the sheer practicality of describing pictures that had been given to him, and then piecing them together to make a whole. The same message occurs through the books: Keep your sword clean; don’t let your tears wet your bow-string: it’s no good thinking what would have happened if you had done something else: things never happen the same way twice: be sure of your food, before you start on a long journey!
Posted by Arborfield at 7:34 am