Lessons from the Death of Tolkien 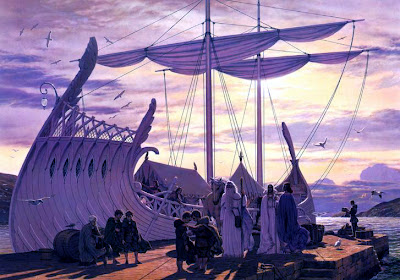 This sense of exile was present in The Lord of the Rings. At the end of the story many of the heroes travel, quietly and alone, to the Grey Havens, a harbour containing ships to take passengers on a one-way voyage away from Middle-Earth. Against all odds good has triumphed, but at a cost. Some of the travellers are scarred by evil, others by sorrow. The boat slips anchor and fades into the darkness, leaving in its wake a glimmer of light, which in turn disappears. A sense of melancholy prevails.
Posted by Arborfield at 9:15 am