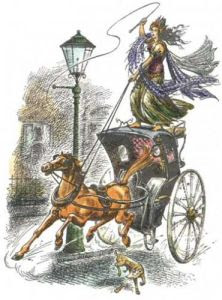 And so we come to accountability. I remember being shocked at the Lion’s scratching deeply the shoulders of Aravis in The Horse and His Boy. Aravis learns later that the slave who had been blamed for her escape had been whipped, and Aravis’s wounds matched hers exactly, number for number, and blood for blood. I doubt if the E.U. would approve of such corporal punishment! But it was certainly just. Ulster people understand this. So, in The Last Battle, when all have to face Aslan and accordingly go with Him, or away from Him, there will be some surprises, and mercy will be shown. So Emeth is told that the services he has done to Tash, Aslan will accept as performed towards Himself. So much for sectarianism! To each Aslan tells his own story. Who but Lewis would have used children’s stories to confront us, each one, with his own destiny?

It is only a step from ritual to magic. Here, the most important factor is who uses it, and for what. Jadis, the White Witch, uses it to increase her own cruel power at the expense of the weak. In The Magician’s Nephew, Uncle Andrew uses magic to feed his vanity. Aslan’s use of sometimes tender, sometimes stern, power comes directly from the Deep Magic of His Father. The Pevensies’ magic gifts from Father Christmas are of this kind, and only to be used in extremis. Lucy’s bottle of healing fluid is most in demand. My husband is one of those who think there are too many fights and battles in the Narnia books. Lewis’s response was that it is so likely that children will meet cruel enemies, let them at least have heard of brave knights and heroic courage. Courage is what he is particularly concerned with, both kinds, - 'the kind that faces danger as well as the kind that ‘sticks it’ under pain'...'You cannot practise any of the other virtues long without bringing this one into play' he wrote in Mere Christianity.
In peace and in war, the Ulster man (or woman) has usually been prepared to put his life where his loyalty and convictions are. Magic doesn’t get him out of this confrontation. He can be humbly awed if things suddenly come right for him; or shocked when retribution strikes those who thought themselves beyond judgement, but I don’t think he would call this ‘magic’.
Posted by Arborfield at 7:47 am