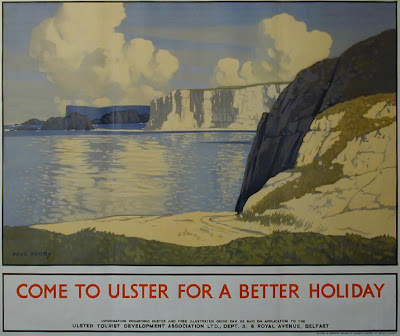 To begin with, I have found myself back in Ulster where I spent my childhood, and Lewis spent his. Ulster for Lewis, of course, had the pre-Partition geography. His childhood and youth knew nine counties., including Donegal, beloved still of all children for seaside holidays at Inver, Rathmullan and Portnoo. In addition, south of Carlingford, there is Co. Louth, once Cuchullain’s country, which stretched down south as far as modern Dundalk. This includes Annagassin, which later became familiar to Jack and Warnie through the Henrys. The Lewis brothers had a happy childhood, as long as their mother was alive. (She died of cancer in 1908, before Jack was 10, and Warnie three years older.) Surprised by Joy tells of those days, blest by good parents, good food, a large garden to play in, a good nurse, Lizzie Endicott from Co. Down, and kindly servants. We learn of his early paintings, drawings and stories, sometimes written down for him by his father. He writes of his first experiences of Joy, an unsatisfied desire which is more desirable than any other satisfaction. Their mother’s death separated them from their father in his frantic grief. All settled happiness came to an end. No wonder Jack Lewis went back to those former sunlit days in his imagination when he wrote the Narnia books. Their Ewart cousins later took them on drives and picnics: perhaps to the places that were to become the essence of Narnia: we don’t know when he first saw the Carlingford/Rostrevor area.
The Christian values of home were not to survive his first boarding school, and he became an atheist. So was W. T. Kirkpatrick, his later splendid private tutor, a man of brilliant intellect, and sound values of moral law. Jack’s love of mythology (Greek, Irish and Norse) prevented his becoming a materialist. He was a lover of fairy tales all his life, and knew well.the great sagas and fairy tales of Ireland. Walter Hooper remembers that ‘if you want to plunge into ...the very quiddity of some Narnian countyside, you must go to what Lewis considered the lovliest spot he had ever seen’ - the Carlingford Lough area, with its sea, woods and mountains. Jack would have known from The Cattleraid of Cooley of these parts: Cooley point is on the eastern edge of the Carlingford peninsula. Jack and Warnie came to know the area well when they stayed with the Henrys at Golden Arrow cottage, Annagassin. Vera Henry, Mrs. Moore’s goddaughter, had acted as maid at the Kilns for some time, and they were all very fond of her; she died suddenly in 1953, to their grief. When I went to see her brother, Major Frank Henry in the Abbeyfield Home near Rostrevor in 1994, he told me with such pleasure of the trips in his car, and Jack’s typical Ulster punctiliousness in paying for all the petrol and expenses involved. Ulster people are practical: "Never forget to wipe your sword" all Narnian heros are told.
Posted by Arborfield at 7:31 am