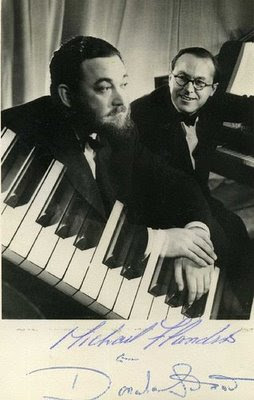 Perhaps it was the shared experience of an Oxford education disrupted by war that unconsciously attracted Donald Swann (Christ Church 1941), the composer and performing partner of Michael Flanders (Christ Church 1940), to The Lord of the Rings, which he re-read every spring. Conversely, it should be no surprise that a writer who specialized in gentle philological puns would be an ardent admirer of Flanders' adroit wordplay.
Swann's affinity with Tolkien's writings was eventually expressed in a song cycle, The Road Goes Ever On. They struck up a friendship, Tolkien providing his imprimatur prior to publication with one minor revision. This was for 'Namárië', a farewell lament in Elvish, for which Tolkien suggested a replacement melody in the style of Gregorian chant, to which Swann assented. As this is sung unaccompanied, both words and music are effectively Tolkien's. Swann subsequently performed the completed work at the Tolkiens' golden wedding celebration at Merton College in 1966, accompanying the bass baritone William Elvin. 'A name of good omen', Tolkien wryly observed beforehand.
.
Swann viewed Tolkien's work not as escapist fantasy, but as a paradigm of human life with its sense of destiny and purpose. An unprepossessing hero, Frodo, is scarred permanently by his quest, as many veterans were by war experience; this loosens his attachment to the Shire. After Tolkien's death, his secretary handed Swann the unpublished 'Bilbo's Last Song'. Swann set and then appended it to the song-cycle. Its closing words - 'Lands there are to West of West, / Where night is quiet and sleep is rest' -- encapsulate the valedictory quality of Tolkien's magnum opus, its 'Northernness' and other-worldly longing. Later, Swann was moved to sing it at the Commemoration for Michael Flanders. 'Namárië' resurfaced at a Holywell Music Room concert in 2007, its performer, Roderick Williams commenting that Oxford was possibly the only place where it could be taken for granted that the audience would understand the lyrics.
.
Read more about the dynamic duo from Brian Sibley's weblog:
http://briansibleysblog.blogspot.com/2008/02/who-says-nostalgia-isnt-what-it-was.html
Posted by Arborfield at 7:29 am