Early Years and the TCBS 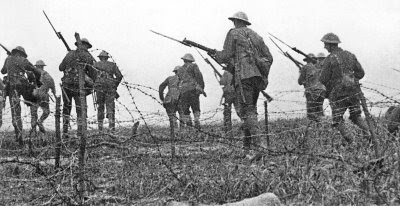 By 1904 Tolkien was attending King Edward's School in Birmingham and already demonstrating a remarkable aptitude for languages. He had made a number of close friends at the school including Robert Gilson, the son of the Headmaster (who was encouraging the young Tolkien to study the classical languages).
.
His first literary society, the Tea Club Barrovian Society (TCBS), started as an illicit supper club in King Edward's library, when summer exams diverted schoolmasterly attention elsewhere, and it soon spread to the hard wooden settles of a nearby tea-room from whence came its mock-grand title. The scholars who formed its nucleus, Christopher Wiseman, Rob Gilson, Geoffrey Bache Smith and Ronald, as he was known, shared a knowledge of classical literature and openness to individual enthusiasms ranging from Renaissance painting to the natural sciences, music and English literature. Tolkien contributed recitations from Sir Gawain and the Green Knight (which he was to co-edit as an academic a decade later) and shared his already deep-rooted love of Norse mythology. The friendship survived the asymmetric translation of Tolkien and Smith to Oxford and Gilson and Wiseman to Cambridge. At Oxford, Tolkien helped form two dining and debating clubs, the Apolausticks, principally for freshmen, and the Chequers, but neither supplanted the TCBS, which still met in vacations to discuss literature and read work in progress. It was at its instigation that Tolkien first experimented with verse form alongside his development of invented languages. Even a few hours in the company of these school-friends gave inspiration, helping him voice 'all kinds of pent-up things'. He compared the group to the Pre-Raphaelite Brotherhood, although the others took this idea considerably less seriously.
.
The members of the group became very close friends with a wide variety of interests all of which rubbed off on the others. Tolkien was studying languages, Robert Gilson was interested in the physical sciences and Renaissance art. Christopher Wiseman's interests included natural science, mathematics and music, whilst a late recruit to the TCBS was Geoffrey Smith, who was instrumental in introducing them to modern English literature.
.
Smith and Tolkien became firm friends and it is probable that it was Smith's influence that prompted Tolkien to start writing poetry. However, Gilson and Smith, were killed in action. On July 15, 1916, Smith wrote to Tolkien of Gilson's death:

My dear John Ronald,
I saw in the paper this morning that Rob has been killed. I am safe but what does that matter? Do please stick to me, you and Christopher. I am very tired and most frightfully depressed at this worst news. Now one realises in despair what the T.C.B.S. really was.
O my dear John Ronald what ever are we going to do?
Yours ever.
G. B. S.

5 months later, Tolkien was informed by Wiseman that Smith had also died in a mission. Smith wrote his last letter to Tolkien just before setting out:
.
My chief consolation is that if I am scuppered tonight -- I am off on duty in a few minutes -- there will still be left a member of the great T.C.B.S. to voice what I dreamed and what we all agreed upon. For the death of one of its members cannot, I am determined, dissolve the T.C.B.S. Death can make us loathsome and helpless as individuals, but it cannot put an end to the immortal four! A discovery I am going to communicate to Rob before I go off tonight. And do you write it also to Christopher. May God bless you my dear John Ronald and may you say things I have tried to say long after I am not there to say them if such be my lot.

The tragedy put an end to the circle of the four and left a deep wound in the hearts of the remaining two. Tolkien, awakened by Smith's echoing words, “may you say things I have tried to say long after I am not there to say them”, starts to write his mythology on a notebook that he titled "The Book of Lost Days”.
Posted by Arborfield at 8:47 am