Tolkien and the Viking Club 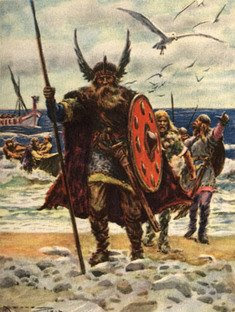 A pre-enlistment First in English Language and Literature had virtually assured Tolkien of an academic career. A readership took him to Leeds University, where the founding of the Viking Club for tutors and undergraduates to fraternise, drink beer, read sagas and sing comic songs helped make him a popular teacher. Back at Oxford in 1925 as Professor of Anglo-Saxon, his declamatory Beowulf lectures, re-enacting the bard in the mead hall, deeply impressed all who heard them; Auden later told Tolkien that his voice he had heard was the voice of Gandalf.
Posted by Arborfield at 3:04 pm

This quote is from Simon Machin at http://www.oxfordtoday.ox.ac.uk/features/brothers-arms, correct? You might want to give the attribution. lest you give the impression it is your own writing.