I've heard of Flower Festivals, but... 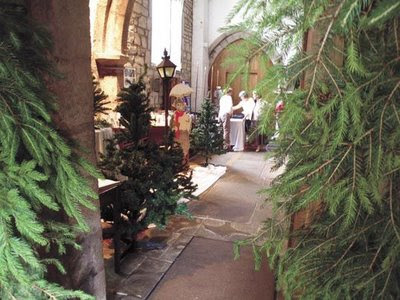 IF YOU look carefully, you can see Mr Tumnus, the faun, standing under the lamp post (Above, left). For one Sunday morning, the doors of the riverside Church of St Michael and All Angels, Linton, in Bradford diocese, opened into the magical land of Narnia.

A hundred people made their way through fir trees, meeting many of the characters from The Lion, the Witch and the Wardrobe. Mr and Mrs Beaver had built their dam in the side chapel; the four thrones for the two kings and two queens stood by the altar; and in the children’s corner were the stone statues of the creatures from Narnia who had fallen foul of the White Witch. A huge picture of Aslan the lion was projected on to the chancel arch.

Knowing that the Disney film of Prince Caspian would soon be released, the team who organise Linton’s “Liquid Worship” services thought they would remind people of the earlier C. S. Lewis book. They worked very hard to set it all up, but one of the team said: “It was very well worth it. The look of wonder on everyone’s face as they came into church was priceless.”