The Horse and His Boy 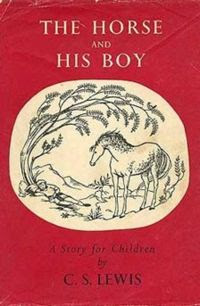 Bree (the horse) and Shasta (the boy) use the phrase "Narnia and the North" as their rallying cry as they make their escape from their life in Calormen. They are both motivated by a deep longing to find their way to the place that is ultimately their true homeland. In the setting of The Horse and His Boy, the reader finds a departure from the landscapes, culture, and people of the Narnian realms which have become familiar in the other books. The placement of the action in the more alien realm of Calormen helps to convey a sense of unbelonging on the part of the characters and the reader, which reinforces the motif of longing for a true home.

In other works, Lewis uses the German word Sehnsucht to encapsulate the idea of an "inconsolable longing" in the human heart for "we know not what." C. S. Lewis, as a Christian, identifies the objects of Sehnsucht-longing as God and Heaven.

After meeting up with King Lune of Archenland and his hunting party, and warning them of the impending Calormene invasion, Shasta becomes lost in the fog and separated from the King's procession. After continuing blindly for some way, he senses that he has been joined in the darkness by a mysterious presence. Engaging in conversation with the unknown being, Shasta confides what he sees as his many misfortunes, including being chased by lions on two separate occasions, and concluding with "If nothing else, it was bad luck to meet so many lions." His companion then proclaims himself as the single lion that Shasta has encountered in his travels:

Thus it is revealed to Shasta, that, in the incidents which he perceived as misfortunes, Aslan, in his Divine Providence, has been orchestrating events for his greater purposes.

(Wikepedia)
Posted by Arborfield at 7:22 am