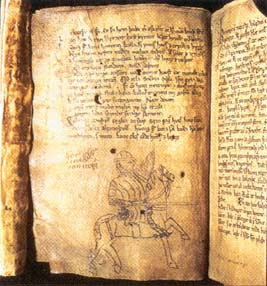 The Coalbiters were formed for the discussion of a single particular common interest, that of the Old Icelandic myths and language. Tolkien named the association "Kolbitar," which referred to Coalbiters. This name hearkened to the telling of noble adventures and sagas around the roaring hearth. (Coalbiters are those who lounge so close to the fire in winter that they virtually bite the coal.) The image also emphasizes the intimacy shared by the group's members as they bundled themselves against the chill of world change and secularisation, and regaled one another with the retelling of grand tales of history and myth.

The group met approximately once a week, discussing the bits and pieces of Icelandic myth that led up to the cycle of myths that make up The Elder Edda.

The Coalbiters included many of the scholars that would later become members of The Inklings including Hugo Dyson, Neville Coghill, George Gordon, and several others.

One late addition to this “club” was C.S. Lewis, at the time a relatively new Fellow of English Language and Literature at Magdalen College, Oxford. He had met Tolkien several times before this, and the two of them had found they had much in common.

Lewis was deeply interested in the Northern myths, as Tolkien was, and the two of them often carried on their conversations of Asgard and the gods of the north long after the formal end of the Coalbiters’ meetings.

Tolkien was so encouraged by these meetings with Lewis that he began to read him bits and pieces of his early Middle-earth mythology, including the rhyming couplets he had composed called The Lay of Lethian. Lewis lavished praise on the writings. Humphrey Carpenter, in his book The Inklings, reprinted a letter written by Lewis to Tolkien in December 1929:

“I should have enjoyed [the poem] just was well if I’d picked it up in a bookshop, by an unknown author. The two things that come out clearly are the sense of reality in the background and the mythical value” (p. 30).

This was the beginning of what would become a lifelong and influential friendship for both writers.

The Coalbiters soon finished reading the cycle of myths that had brought them together. It would not be long, however, before another, far more influential, group rose from the ashes of the Coalbiters… the Inklings.
Posted by Arborfield at 7:47 am