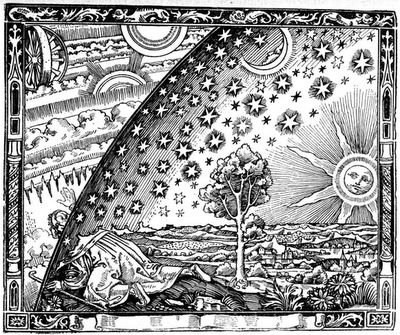 Michael Ward's dissertation points out that by the medieval (Ptolemic) reckoning, there were seven planets: the Moon, Mercury, Venus, the Sun, Mars, Jupiter and Saturn. Was it possible, Ward wondered, that each of the seven Narnia books was written under the sign of a different planet?

Looking closely at the Narnia Chronicles side-by-side with Lewis's 1935 poem, and other of his writings that touch on the planets, especially his posthumously published book, The Discarded Image, a retrieval of the medieval worldview, Ward found that indeed there is such a correspondence:

- The Lion, the Witch, and the Wardrobe corresponds to Jupiter,
- Prince Caspian to Mars,
- The Voyage of the Dawn Treader to the Sun,
- The Silver Chair to the Moon,
- The Horse and His Boy to Mercury,
- The Magician's Nephew to Venus, and
- The Last Battle to Saturn.

Each planet, in a greatly simplified summary of the medieval understanding, represents a certain set of linked emotions and images, a temper, a disposition, along the spectrum -- we are all familiar with a 'jovial', 'saturnine' or 'mercurial' dispositions -- and these are reflected, Ward found, in the Narnia books, both in the big arc of each story and in countless fine touches throughout each volume.

What Ward has discovered is entirely consistent with Lewis's Christian humanism. The imaginative worldview embodied in the medieval astrological lore of the planets speaks to something fundamental in our experience; it is not to be rejected but rather baptised, made harmonious with the underlying Christian vision that governs Narnia.

Ward's discovery will send fellow-scholars and countless ordinary readers back to the books to evaluate the evidence for themselves. In the long term, by situating the Narnia Chronicles in the context of Lewis' lifetime fascination with the planets and showing the intricate patterning of the series, Ward will have finally laid to rest what he rightly calls A.N. Wilson's absurd suggestion that "Lewis turned to children's fiction as a retreat from apologetics after his clash with philosopher Elizabeth Anscombe at the Socratic Club." And he will have added yet another layer of appreciation for books that have delighted generations of children and their parents.

Michael Ward has lectured on Lewis in Oxford, Cambridge and many places in the United States, including Wheaton College, IL; Notre Dame University, IN; and Fuller Theological Seminary, CA.

Ward's work is to be published in the Spring of 2007 by Oxford University Press (USA) under the title "Planet Narnia".

Conclusion
In his 1937 TLS review, Lewis concluded by saying that Tolkien's Hobbit "will be funniest to its youngest readers, and only years later, at a tenth or twentieth reading, will they begin to realise what deft scholarship and profound reflection have gone to make everything in it so ripe...".

In a similar way, the Narnia Chronicles have yielded up their secret... only after many years and many readings. The Narnian septet has often been criticized by those who object to its Christian symbolism. Now it may be the turn of the religious fundamentalists to raise their own cry of foul. Narnia is a work of medieval astrology!

... and of course, all Seven Narnia Books.

Posted by Arborfield at 8:37 am

If I remember rightly, from having read 'That Hideous Strength' back in my youth, there is a passage towards the end which mentions the passing of the planets and the particular effect they have upon the human and animal characters, especially venus.

For several days I have been reading and looking for Planet Narnia(XI) Summary and is amazing and disturbing how many blogs related to generic viagra are in the web. But anyways, thanks for sharing your inputs, they are really helpful.
Have a nice day