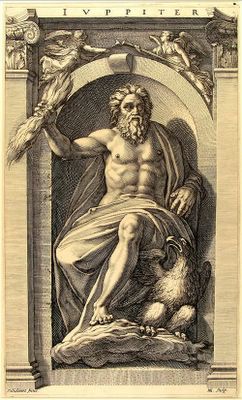 Jupiter & The Lion, the Witch and the Wardrobe
If we examine "The Planets" again with one eye on Lewis's most successful imaginative work - Narnia - we discover something very interesting. Take, for example, the lines dealing with Jove (or Jupiter):

Joy and Jubilee. It is JOVE'S orbit,
Filled and festal, faster turning
With arc ampler ...Of wrath ended
And woes mended, of winter passed
And guilt forgiven, and good fortune
Jove is master; and of jocund revel,
Laughter of ladies. The lion-hearted,
The myriad-minded, men like the gods,
Helps and heroes, helms of nations
Just and gentle, are Jove's children,
Work his wonders. On his wide forehead
Calm and kingly, no care darkens
Nor wrath wrinkles: but righteous power
And leisure and largess their loose splendours
Have wrapped around him - a rich mantle
Of ease and empire. Up far beyond

What these lines contain, as Dr. Ward maintains, is a plot summary of The Lion, the Witch and the Wardrobe , which is a tale of "winter passed / And guilt forgiven". In that story, the first of the Narnia Chronicles, we find a White Witch who is confronted by the "lion-hearted" Aslan, and witness the passing of her perpetual winter "always winter but never Christmas".

The "guilt forgiven" is that of the traitorous Edmund whose dream of becoming King of Narnia is shipwrecked on the rocks of the primogenitive High Kingship of his brother, Peter, and on Aslan's pre-eminent and sacrificial kingliness. Upon his resurrection, Aslan romps with Susan and Lucy in "jocund revel, / Laughter of ladies".

The four Pevensies ("Jove's children") show themselves to be "helps and heroes" in the final battle with the Witch, and are eventually crowned as joint sovereigns ("helms of nations"), with Edmund earning the title "King Edmund the Just" and Susan the title "Queen Susan the Gentle".

Altogether, the story tells the tale "of wrath ended / And woes mended", for "Wrong will be right, when Aslan comes in sight, / At the sound of his roar, sorrows will be no more".

The Lion, the Witch and the Wardrobe , we may safely conclude, is Lewis's Jupiter. The jovial influence permeating the story is an example of what Lewis called "the kappa element in Romance" - its hidden element, its quality or atmosphere - which is what Lewis chiefly valued in narrative fiction.

Posted by Arborfield at 7:59 pm