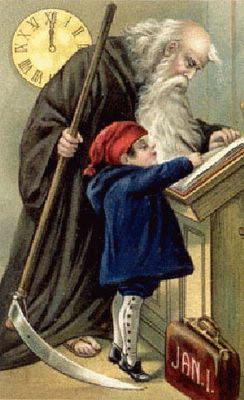 [Above - an imaginative rendition of Saturn as a hooded, cloaked figure bearing a scythe in his guise as Father Time]

Saturn and The Last Battle

Saturn
Saturn, whose name in the heavens is Lurga, stood in the Blue Room. His spirit lay upon the house, or even on the whole Earth, with a cold pressure such as might flatten the very orb of Tellus to a wafer. Matched against the lead-like burden of his antiquity the other gods themselves perhaps felt young and ephemeral. It was a mountain of centuries sloping up from the highest antiquity we can conceive, up and up like a mountain whose summit never comes into sight, not to eternity where the thought can rest, but into more and still more time, into freezing wastes and silence of unnameable numbers. It was also strong like a mountain; its age was no mere morass of time where imagination can sink in reverie, but a living, self-remembering duration which repelled lighter intelligences from its structure as granite flings back waves, itself unwithered and undecayed but able to wither any who approach it unadvised. ...

The Last Battle - Saturn
(Saturnine features here include ill-chance in Shift's discovery of the lionskin, treachery by the dwarfs, the appearance of Father Time who, according to The Discarded Image , is "derived from earlier pictures of Saturn"; and, ultimately, the death of Narnia, "a perilous draught / That the lip loves not".)

Saturn has been known as father time for at least the past three thousand years.
According to Ovid:
"An ancient story has it that when this land was called Saturn's, the oracle of Jupiter spoke like this: 'For the Old Man with the Sickle, pick out and toss in two of your people's carcasses for the Tiber to take'."

Ovid also wrote:
"And the ship? A ship brought the god with the sickle to the Tiber after he'd wandered all over the world. I well remember when this land welcomed Saturn after Jove banished him from the heavenly kingdom. For a long time the name 'Saturnian' stuck to the people, and Latium was named for the lately evicted god. Following generations duly minted pennies with a ship to commemorate the divine stranger's arrival."

Posted by Arborfield at 3:48 pm