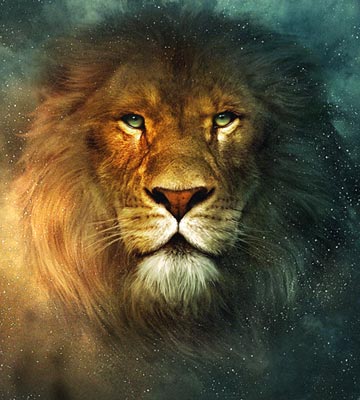 Is this the first appearance of Aslan in literature?  Written by Charles Williams and first published in 1931 here we meet a tremendous lion.  My question… was C.S. Lewis influenced by this passage in his invention of Aslan two decades later?  At the time it was written, Jack and Charles had not met, nor did they know each others work.  I’d be very interested in any comments from Lewis/Williams scholars and readers.

“Forms and shadows twisted and mingled for two or three seconds in the middle of the garden, a tearing human cry began and ceased as if choked into silence, a snarl broke out and died swiftly into similar stillness, and as if in answer to both sounds there came the roar of a lion - not very loud, but as if subdued by distance rather than by mildness.

With that roar the shadows settled, the garden became clear.  Anthony and Quentin saw before them the form of a man lying on the ground, and standing over him the shape of a full-grown and tremendous lion, its head flung back, its mouth open, its body quivering.  It ceased to roar, and gathered itself back into itself.

It was a lion such as the young men had never seen in any zoo or menagerie; it was gigantic and seemed to their dazed senses to be growing larger every moment.  Of their presence it appeared unconscious; awful and solitary it stood, and did not at first so much as turn its head.  Then, majestically, it moved; it took up the slow forward pacing in the direction which the man had been following; it passed onward, and while they still stared it entered into the dark shadow of the trees and was hidden from sight.”

Charles Williams
The Place of the Lion
(Victor Gollancz, 1931)
Posted by Arborfield at 6:53 pm


Also, bonus: Lewis was at the point of throwing the Chronicles of Narnia in the trash, but kept it because he felt it was simply an amazing story, so he gave it a second chance.

Ah, yes... all well known facts. But just whom gave him the nightmares?