The Long Defeat (2) by Sorina Higgins 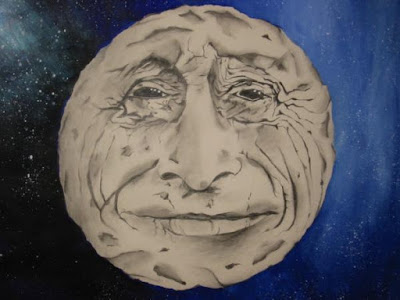 (2) Man in the Moon himself came down…
An enormous guffaw exploded from all four mouths, puffing away the smoke and rattling the walls. Four heads were thrown back, hands slapping the table or someone else’s back in merriment, faces red with laughter, feet pounding the floor in delight. The slender dancer leaped up and cut a caper in the middle of the room. Then the tall, thin fellow did him one better by clambering upon the table and declaiming with gusto:

After only two words, the big fellow joined in, adding his booming voice to the other’s rather garbled articulation, and the ancient sounds rolled across the pub:

As the chanting went on, the other two joined, a line or so behind, adding modern English antiphonally to the din:

“Thought shall be the harder, heart the keener,
courage the greater, as our might lessens.
Here lies our leader all hewn down,
the valiant man in the dust; may he lament for ever
who thinks now to turn from this war-play.”

The gentleman on the table tripped on an empty pint pot—there had been only a couple of beers shared among them that evening, what with the rations and the shortages—and the others reached up to steady him, roaring with laughter as they offered their hands to help him down from the table.
“No, no!” he protested. “I have a song to sing first!”
They struggled with him for a moment, trying to get him off of the table-top, but he resisted, shook himself free of their hands, and announced:
“The Man in The Moon Came Down Too Soon.”
“The old man had better not send you off to war, Tollers,” the beefy chap bellowed. “You’d only sing songs at the Germans to frighten them away.”
“And then begin analyzing the history of their language,” the lithe little fellow put in. “Didn’t you spent the whole of the first war talking about verbs with a German prisoner?”
“I fought in the battle of the Somme!” the table-top singer protested, but the little man went on:
“And Jack would retell their own myths to them until they all fell asleep with boredom and we could walk right into Berlin over their snoring forms.”
C. S. “Jack” Lewis howled at this, banging the table with his fist. The table shook, and Professor John Ronald Reuel Tolkien wobbled among the dishes. He put out a hand to steady himself, and it landed on the head of the stoop-shouldered man on his right, who grasped it and burst into a fluid stream of quotation:

“A pack of blessings light upon my head,
Happiness courts me in her best array,
But, like a misbehaved and sullen wench,
I pout upon my fortune and thy love.”

Tolkien and Lewis, tears of merriment running down their faces, shouted together:
“Take heed, take heed, for such die miserable!”
And Lewis went on:
“Art thou a man? Thy form cries out thou art. Thy tears are womanish. —But you are a true man, Williams, and regular charmer to the ladies. Maybe the top brass should send you to Germany to seduce all of Jerry’s women. You could do what you liked with them as either a cad or a Don Juan, undermining national morale and making way for an Allied invasion—if you were not a thoroughly good man.”
Tolkien harrumphed, as it he wasn’t quite sure about the “good man” part, but he kept his hand on Charles Williams’s head to steady his precarious balance upon the table. Williams beamed up at him, a beatific smile that glowed upon the little fellowship, transforming his face from simian wizardry to angelic beauty. Dapper little Owen Barfield looked on, tapping his heels in an impatient rhythm on the floor, and said:
“But we need Charles here more than over there. Not for the women, but for the sanity and consciousness of England herself. Your doctrines of love and forgiveness keep madness at bay here in this city of wisdom in our trying times.”
The others nodded soberly.
“I have never heard anything like your lecture on Milton,” Lewis agreed. “It is the first, and probably the last, time that I have ever seen a university doing what it was meant to do: teaching wisdom.”
Williams stood gracefully, catching Tolkien’s hand to steady the professor, who still stood on the tabletop, waiting to sing his song. Williams bowed ceremoniously, one hand on his heart, then kissed his hand to each of them, gracious as an emperor.
“Wisdom shall soon cease in this city and all such ordered civilizations of our times,” he said, “if we are all sent off to wield our useless weapons in aged hands, to die beside our sons and brothers, and for all our learning to be buried with our bones in France.”
A blue haze settled over the friends for a moment—then Tolkien burst out, waving the smoke away from his face with a slender hand:
“Enough of this serious chatter! I have a song to sing!”
He began warbling:

“There is an inn, a merry old inn
beneath an old grey hill,
And there they brew a beer so brown
That the Man in the Moon himself came down
one night to drink his fill.”

(to be continued)
Posted by Arborfield at 8:59 am