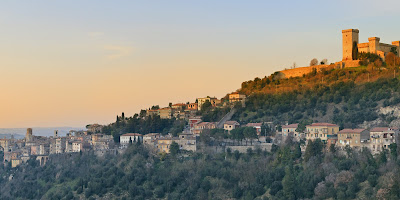 You may be surprised to know that C. S. Lewis took the name of 'Narnia' from an ancient Roman town in the Italian province of Umbria. An incident in the Punic Wars took place there.

The Italian city on the site today is called 'Narni'. Narni now has a web page at http://www.bellaumbria.net/Narni/

"It will perhaps surprise you to hear that I spent a day (in Narni/Narnia) in October (1996). In fact, this was my second trip, as my godson and I were there first five years ago. C. S. Lewis came across the name 'Narnia' in a classical atlas he used as a boy, and continued to use it all his life. I have it now, and it's interesting to see that he underscored the name when he first saw it back in about 1914. In Italian Narnia is called 'Narni', and it's under that name that you will find it on modern maps.

It was already a very ancient town when the Romans conquered it in about 299 BC. In a little history of the place, it is stated that 'Although Neolithic people lived in this region, the first historical document, mentioning the town, is dated 600 BC, when Nequinum and its inhabitants are mentioned. In 299 BC, Narni was a Roman colony under the name of Narnia, a name that comes from the Nar river, which today is called the Nera.'

For me one of the most surprising things about Narnia is that a very popular local saint is called 'Blessed Lucy of Narnia.' She was a Dominican nun of the 16th century, but whether Lewis had ever heard of her I don't know. My godson, to whom the Lewis COMPANION is dedicated, and I first went there in October 1991. We knew about Blessed Lucy of Narnia, but we didn't know whether she was still remembered by the inhabitants of Narnia. To our delight, she is buried in a beautiful chapel attached to the 12th century cathedral of Narnia, and is very popular in that area…

But - oh! - what a beautiful place Narnia is. It's only about 50 miles north-east of Rome, and very easy to get to by train, or car. So far it remains unvisited by tourists, and so I've never encountered crowds there on my two visits."
Posted by Arborfield at 1:30 pm

I passed through Narni in April 1967, on the way to Rome, and was struck by its beauty and also by the resemblance of the name to Narnia, though I had no idea that C.S. Lewis might have used it as the inspiratio0n for his mythical land.