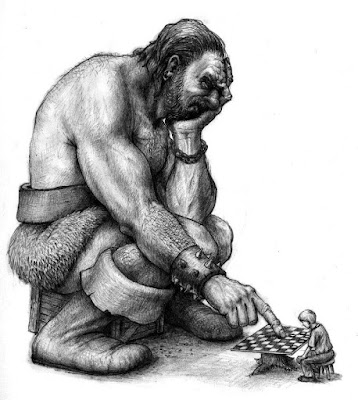 Shortly after the last apple had been eaten, Susan went out to the well to get another drink. When she came back she was carrying something in her hand."Look," she said in a rather choking kind of voice. "I found it by the well." She handed it to Peter and sat down. The others thought she looked and sounded as if she might be going to cry. Edmund and Lucy eagerly bent forward to see what was in Peter's hand -- a little, bright thing that gleamed in the firelight.

"Well, I'm--I'm jiggered," said Peter, and his voice also sounded queer. Then he handed it to the others. All now saw what it was -- a little chess-knight, ordinary in size but extraordinarily heavy because it was made of pure gold; and the eyes in the horse's head were two tiny rubies--or rather one was, for the other had been knocked out.

"Why!" said Lucy, "it's exactly like one of the golden chessmen we used to play with when we were Kings and Queens at Cair Paravel.""Cheer up, Su," said Peter to his other sister."I can't help it, said Susan. "It brought back--oh, such lovely times. And I remembered playing chess with fauns and good giants, and the mer-people singing in the sea, and my beautiful horse -- and -- and --"