Looking for the King 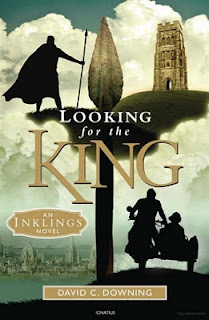 "What is this Holy Grail we hear so much about?" asked Williams, pacing back and forth so rapidly that Tom could hear keys or coins clinking in his pocket. "Is the Grail the holy chalice used by Jesus on the night of the Last Supper? Is it a cup in which Joseph of Arimathea caught drops of Christ's blood as he was stretched out on the cross?" Again, Williams peered into individual faces, speaking to over a hundred people, but giving each one the impression he was talking just to him. "Or perhaps you favor the Loomis school: the Grail is a bit of 'faded mythology', a Celtic cauldron of plenty that somehow got lugged into Arthurian lore?"
Williams paced back and forth some more, throwing his hands into the air, as if to say, who can answer all these imponderable questions? Then he plunged in again: "There is no shortage of texts on the subject. Let's start with Chretien de Troyes: Percival, or the Story of the Grail, written sometime in the 1180s. This is the first known account of the Grail. The young knight Percival sits at banquet at the castle Carbonek and sees an eerie procession—a young man carrying a bleeding lance, two boys with gold candelabra, then finally a fair maid with a jeweled grail, a platter bearing the wafer of the Holy Mass. Percival doesn't ask what it all means and thereby brings a curse upon himself and on the land." Williams surveyed the crowd again, as if waiting for someone to stand and explain all this to him. The room was silent as a church at midnight, so Williams went on, listing all the famous medieval texts and their retellings of the Grail legend, noting how their dates clustered around the late twelfth and early thirteenth centuries.
"So much for the literary versions", he continued. "But what is this Grail really"? What lies behind the texts? Some describe it as a cup or bowl, some as a stone, some as a platter. The word grail, by the way, comes from the Latin gradalis, more like a shallow dish, or a paten, than a chalice." After another strategic pause, Williams exclaimed, almost in a shout, "How extraordinary! Here we have what some would call the holiest relic in Christendom, and no one seems to know what it looks like."
Pacing some more, as if trying to work off an excess of agitation and intellectual energy, Williams went back to the lectern and leaned on it heavily…
David C. Downing
Looking for the King (Chapter 3)
Ignatius Press 2010
Posted by Arborfield at 8:08 am