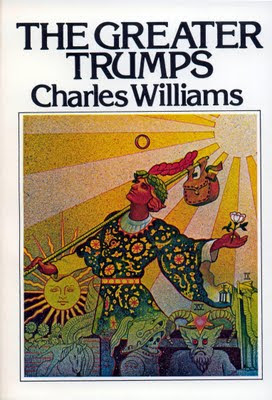 Henry took a few steps forward, slowly and softly, almost as if he were afraid that those small images would overhear him, and softly and slowly Aaron followed. They paused at a little distance from the table, and stood gazing at the figures, the young man in a careful comparison of them with his memory of the newly found cards. He saw among them those who bore the coins, and those who held swords or staffs or cups; and among those he searched for the shapes of the Greater Trumps, and one by one his eyes found them, but each separately, so that as he fastened his attention on one the rest faded around it to a golden blur.

But there they were, in exact presentation--the juggler who danced continuously round the edge of the circle, tossing little balls up and catching them again; the Emperor and Empress; the masculine and feminine hierophants; the old anchorite treading his measure and the hand-clasped lovers wheeling in theirs; a Sphinx-drawn chariot moving in a dancing guard of the four lesser orders; an image closing the mouth of a lion, and another bearing a cup closed by its hand, and another with scales but with unbandaged eyes--which had been numbered in the paintings under the titles of strength and temperance and justice; the wheel of fortune turning between two blinded shapes who bore it; two other shapes who bore between them a pole or cross on which hung by his foot the image of a man; the swift ubiquitous form of a sickle-armed Death; a horned mystery bestriding two chained victims; a tower that rose and fell into pieces, and then was re-arisen in some new place; and the woman who wore a crown of stars, and the twin beasts who had each of them on their heads a crescent moon, and the twin children on whose brows were two rayed suns in glory--the star, the moon, the sun; the heavenly form of judgement who danced with a skeleton half freed from its graveclothes, and held a trumpet to its lips; and the single figure who leapt in a rapture and was named the world.

One by one Henry recognized them and named them to himself, and all the while the tangled measure went swiftly on. After a few minutes he looked round: "They're certainly the same; in every detail they're the same. Some of the attributed meanings aren't here, of course, but that's all."

Posted by Arborfield at 8:01 am