The Kilns in Wartime 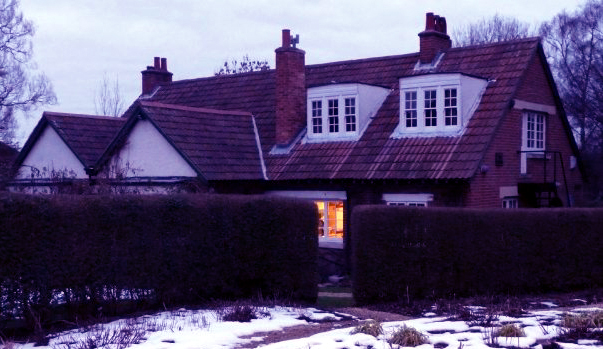 In the First World War two things had been invented which were to change the whole face of wartime life for the people living at home. One was airplanes that could fight; as well as transport bombers and fighters. The other was submarines. Bombers now allowed the vileness of war to be brought from the battlefields right into the cities and homes of the civilian populations of the warring nations. Submarines had been used to sink warships, but in this new war they were being used to sink merchant ships in an effort to starve the people of Britain into surrender.
So the first thing that had to be done was to protect the children of the cities from the danger of being blown to bits by bombs dropped from the sky. In England, children from London and other cities were evacuated to country areas, and soon several schoolgirls were living at The Kilns. Paxford and lack had built and buried a concrete air-raid shelter up by the lake (it's still there; and if you walk from the house up to the lake, turn left, and work your way through the overgrown bushes, you will find it), and the house had to be fitted with black-out curtains so that at night no slightest gleam of light could escape the windows to attract the interest of enemy pilots. These were heavy curtains often made out of thick wool blankets of the same kind as were issued to soldiers or sailors in the armed forces. Air raid protection (ARP) wardens were appointed to walk around on patrol at night, and the cry of, "Oi! Number 27, dowse that glim!" and the like were often to be heard as the warden spotted a gleam of light from the windows of number 27 of whatever street he was patrolling at the time.
At The Kilns, at first the blackout was achieved by a whole conglomeration of towels, rags, spare clothes, blankets, and all sorts of weird and wonderful bits and pieces, but eventually, heavy navy blue and khaki (of the English olive green sort) blankets were tailored to fit the windows, and only the last chinks were filled with odds and ends of material to seal in the light. They also helped to keep the cold out, and this was important because all the coal, which was the main fuel burned in the fireplaces and boilers for heating, was soon to be needed for running the steam engines of ships and trains. Coal for household use became hard to get.
Douglas Gresham
'Jack's Life' (Broadman & Holman) 2005