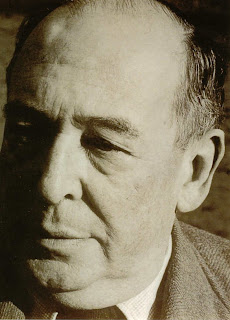 I know myself what others know far better - how unfailingly courteous Lewis was in answering letters. I think I corresponded with him on three or four occasions... there was a reply every time - it might be quite brief, but it was always written for you and for nobody else. I think this was his greatest secret.
He hated casual contacts; human contact must, for him, be serious and concentrated and attentive, or it was better avoided. It might be for a moment only, but that was its invariable quality. That is not only why so many people have precious memories of him; it is also why he couldn't write three words without the reader's feeling that they were written for him and him alone. It's why his massive books of scholarship read as delightfully as his children's stories, and why he's one of the few preachers who can be read without losing their message."
Erik Routley, "A Prophet", C.S. Lewis at the Breakfast Table and Other Reminiscences
Posted by Arborfield at 7:30 am