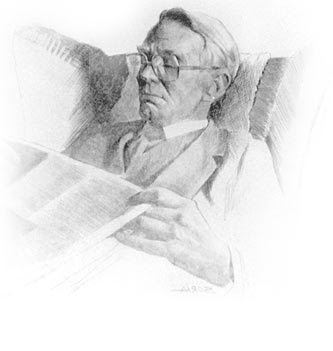 Owen Barfield (1898–1997) and C. S. Lewis were exact contemporaries and as Oxford students they became each other’s best friends for some time. Barfield became a lawyer but also wrote some philosophical works. Lewis gratefully adopted some of his ideas, including the theory of ‘old single meanings’ or ‘ancient unities’ as expounded in Barfield’s Poetic Diction: A Study in Meaning (1926, new edition 1952).

Barfield shows how primitive man employed many concepts, and had in fact many experiences, which in the course of time have broken up into very different, often irreconcilable parts. Thus ‘spirit’ originally meant (1) breath or wind, and (2) principle of life with humans and animals -- without any speaker making this distinction: there was no awareness of a literal as against a figurative sense or even of a single thing having several aspects. This theory of primitive speech and thought is further developed into ideas about language and poetry (‘language is fossil poetry’) and about the ‘evolution of consciousness’.
Posted by Arborfield at 5:55 am