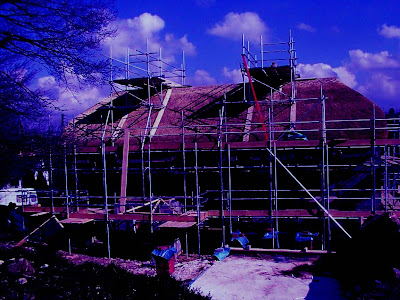 The ladder frightened him, lest it should be too much boarded, or else, bone-white in the moon, should, while he climbed, expose his yet living body to those universals who would have him live. But it was open for him, and he crouched within the lower shell of a room, holding the rope, peering, listening, waiting for he did not guess what until it came. He thought once he heard hurrying feet at a distance, but they were going from him, and presently all was again quiet. The moonlight gently faded; the white rungs grew shadowy; a cloud passed over the sky, and all was obscured. The heavens were kind, and the moon did not, like the sun, wait for a divine sacrifice in order to be darkened. A man served it as well. He rose, and slipped to the foot of his ladder. He went softly up, as the Jesuit priest had gone up his those centuries earlier paying for a loftier cause by a longer catastrophe. He went up as if he mounted on the bones of his body built so carefully for this; he clambered through his skeleton to the place of his skull, and receded, as if almost in a corporeal ingression, to the place of propinquent death. He went up his skeleton, past the skeleton frames of the ground floor, of the first floor. At the second the poles of the scaffold stretched upward into the sky. The roof was not on, nor his life built up. He dragged himself dizzily on to the topmost landing, pulling the rope after him, and there his crouching mindstayed. The cloud passed from the moon; another was floating up. His flesh, in which only his spirit now lived, was aware of the light. He still hoped for his best; he lay still.

For a long time Charles Williams has been the forgotten Inkling, but in the last couple of days I've seen lots of related posts about him, and I've linked some of them at Notes from underground: Descent into hell -- Coinherence and substitution.

I still wonder why CW is the forgotten Inklings; do you think it has something to do with his contentment with allowing moral ambiguities to co-exist? (Although that might almost be a reason for his popularity, rather than against it.

Thanks, Steve, for gathering these threads together.

Too dense... too difficult... to literary... take your pick. BUT, well worth the effort!

I say he is the "fotrgotten Inkling" because his books are either out of print or hard to get. That's not uncommon among authors who have been long dead. But one can still find Lewis and Tolkien's books in most bookshops.

Phil Rickman's books are also hard to find, though.

Hi. I am new to Charles Williams, i am reading Descent into Hell, more like trying. The book is an uncle's whose literary selection i trust. some of the stuff is over my head though, because i am young and have a limited theological and philophosical knowledge. But i like him and glad i came across this site. Have you read his other books?

Although Descent into Hell is largely considered CW's best novel (and I would tend to agree, although All Hallows' Eve makes a strong case as well) it is, in my opinion, his most difficult. I'd recommend starting with Many Dimensions.