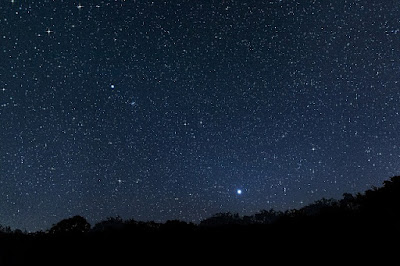 In his early twenties, Tolkien read the above lines for the rst time. They are part of an eighth century devotional piece called Crist (‘Christ’), writ- ten in Anglo-Saxon by the poet Cynewulf, in which the planet Venus is described in personal and angelic terms, using the name Earendel. ‘I felt a curious thrill,’ Tolkien later remembered, ‘as if something had stirred in me, half wakened from sleep. There was something very remote and strange and beautiful behind those words, if I could grasp it.’

Forty years later, now in Quenya, Cynewulf’s line reappears in The Two Towers: Frodo, holding the Starglass in the great darkness of Shelob’s Lair, cries out Aiya Eärendil Elenion Ancalima!—‘Hail Eärendil, brightest of stars!’—a prayer to the mariner who sails the skies with a Silmaril on his brow. The journey from a fragment of Old English to the pass of Cirith Ungol mirrors the journey of Tolkien’s legendarium as a whole.

David Rowe
$15 from Oloris Publishing.
Posted by Arborfield at 9:10 am