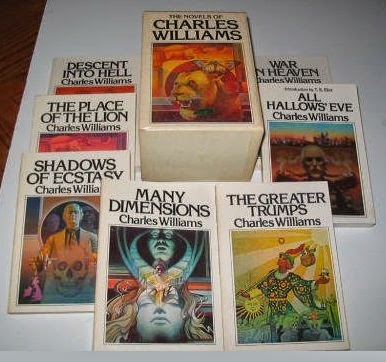 Beatrice was to Dante Thomas Howard is to readers of Charles Williams, whose novels are not exactly hell to read, but some may yet find them somewhat tough going. It's a pity, because as with the Latin Mass, if we only knew what we were missing we would clamor for more. Thankfully Ignatius Press has reprinted this book by Thomas Howard so that we do have a guide through this marvelous world. In this book, originally published by Oxford University Press, Thomas Howard starts with the party line that Williams is a bad writer, and then shows us why he's a very good one (Thomas Howard can be very sneaky). He explains why CW can't be considered a “major” writer, and maybe not even a good candidate for a minor one, but by the end of the book one is convinced that the label “major” is too small to fit Charles Williams.

Howard is similarly dismissive of his own writing in this book, even though it stands as one of his best (his best to date, in my opinion, is On Being Catholic). He suggests the reader not even read the whole book, but just jump around to the relevant parts for the Williams novel he/she is interested in. Here again I must express a minority opinion: The Novels of Charles Williams reads seamlessly and grippingly start to finish.

Anyone venturing into a Williams novel for the first time might find the water, as it were, initially cold and uninviting, regardless how heartily the swimmers urge him or her to dive in. Howard is like a personal trainer, both preparing the reader and helping them stay in shape when, gripped with the strange madness that afflicts readers of Williams novels, they recklessly swim further and further from shore. Howard is obviously among the initiates, and the more dismissive he is of Williams' standing as a writer, the more you want to read him. ’Nuff said. Dive in. The water's fine.

Gord Wilson (Bellingham, WA USA)
Posted by Arborfield at 7:27 am