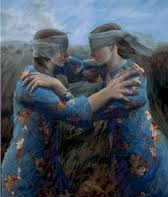 Her heart sprang; there, a good way off-thanks to a merciful God -- it was, materialized from nowhere in a moment. She knew it at once, however far, her own young figure, her own walk, her own dress and hat-had not her first sight of it been attracted so? changing, growing...  It was coming up at her pace -- doppelgaenger, doppelgaenger -- her control began to give... two... she didn't run, lest it should, nor did it.   She reached her gate, slipped through, went up the path.  If it should be running very fast up the road behind her now?  She was biting back the scream and fumbling for her key.   Quiet, quiet!  "A terrible good."  She got the key into the keyhole; she would not look back; would it click the gate or not?  The door opened; and she was in, and the door banged behind her.  She all but leant against it, only the doppelgaenger might be leaning similarly on the other side.   She went forward, her hand at her throat, up the stairs to her room, desiring (and every atom of energy left denying that her desire could be vain) that there should be left to her still this one refuge in which she might find shelter.

Charles Williams
Descent into Hell (Ch.1 - The Magus Zoroaster)
Posted by Arborfield at 8:17 am