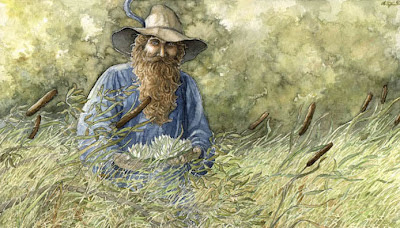 
30 November 1955
[The Lord of the Rings was broadcast on the BBC Third Programme during 1955 and 1956. Among the large cast, the pans of Gandalf and Tom Bombadil were played by the actor Norman Shelley.]
I think the book quite unsuitable for 'dramatization', and have not enjoyed the broadcasts – though they have improved. I thought Tom Bombadil dreadful — but worse still was the announcer's preliminary remarks that Goldberry was his daughter (!), and that Willowman was an ally of Mordor (!!).  Cannot people imagine things hostile to men and hobbits who prey on them without being in league with the Devil!
The Letters of J.R.R. Tolkien
#175 to Mrs Molly Waldron
Posted by Arborfield at 11:04 am

I still haven't finished The Fellowship of the Ring, though once I have time, I fully intend to pick it up again. During my first attempt to read it through, I found Tom Bombadil to be the most peculiar of characters.