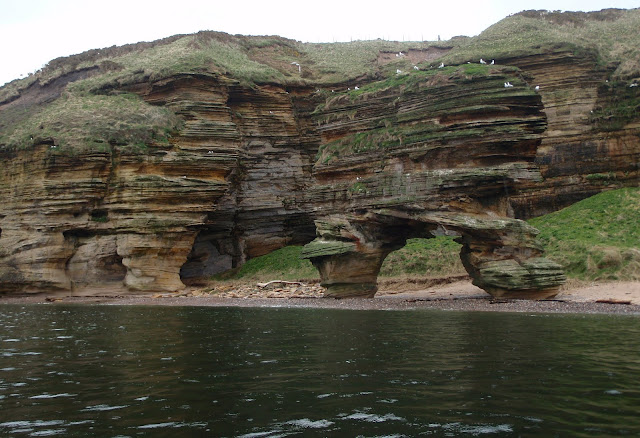 I remembered how the archbishop in Caerleon at a feast
preached that before the making of man or beast
the Emperor knew all carved contingent shapes
in torrid marsh temples or on cold crookt capes.

These were the shapes only the Emperor knew,
unless Coelius Vibenna and his loathly few,
squat by their pot, by the twisted hazel art
sought the image of that image within their heart.

Sideways in the cleft they lay, and the seamews' wings
everywhere flying, or the mist, or the mere slant of the things
seemed to stir them; then the edge of the storm's shock
over us obliquely split rock from rock.

Ship and sculpture shuddered; the crags' scream
mingled with the seamews'; Logres' convulsed theme
wailed in the whirlwind; we fled before the storms,
and behind us loosed in the air flew giant inhuman forms.

When from the sea I came again to my stall
King Arthur between two queens sat in a grim hall,
Guinevere on his right, Morgause on his left
I saw in her long eyes the humanized shapes of the cleft.

She sat the sister of Arthur, the wife of Lot,
four sons got by him, and one not.
I heard as she stirred the seamews scream again
in the envy of the unborn bastard and the pride of canonical Gawaine.

I turned my eyes to the lords; they sat half-dead.
The young wizard Merlin, standing by me, said:
'Balin had Balan's face, and Morgause her brother's.
Did you not know the blow that darkened each from other's?

'Balin and Balan fell by mistaken impious hate.
Arthur tossed loves with a woman and split his fate.
Did you not see, by the dolorous blow's might,
the contingent knowledge of the Emperor floating into sight?

'Over Camelot and Carbonek a whirling creature hovered
as over the Adam in Eden when they found themselves uncovered,
when they would know good as evil; thereon it was showed,
but then they must know God also after that mode.'

The eyes of the queen Morgause were a dark cavern;
there a crowned man without eyes came to a carved tavern,
a wine-wide cell, an open grave, that stood
between Caerleon and Carbonek, in the skirts of the blind wood.

Through the rectangular door the crowned shape went its way
it lifted light feet: an eyeless woman lay
flat on the rock; her arm was stretched to embrace
his own stretched arm; she had his own face.

Beyond them a single figure was cut in the rock;
it was hewn in a gyration of mow and mock;
it had a weasel's head and claws on hand and feet;
it twirled under an arch that gave on the city's street.

The child lies unborn in the queen's womb;
unformed in his brain is the web of all our doom,
as unformed in the minds of all the great lords
lies the image of the split Table and of surreptitious swords.

I am the queen's servant; while I live
down my eyes the cliff, the carving, the winged things drive,
since the rock, in those fleet lids of rock's hue,
the sculpture, the living sculpture, rose and flew.

Taliessin through Logres (1938)
Charles Williams
Posted by Arborfield at 8:08 am