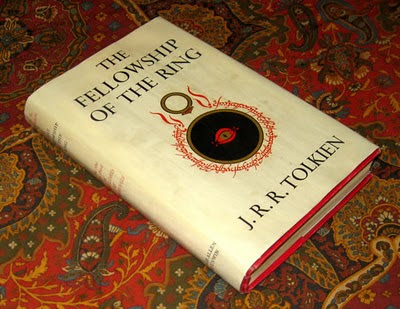 This tale is drawn from the memoirs of Bilbo and Frodo Baggins, preserved for the most part in the Great Red Book of Samwise. It has been written during many years for those who were interested in the account of the great Adventure of Bilbo, and especially for my friends, the Inklings (in whose veins, I suspect, a good deal of hobbit blood still runs), and for my sons and daughter.

'But since my children and others of their age, who first heard of the finding of the Ring, have grown older with the years, this tale speaks more clearly of those darker things which lurked only on the borders of the other tale, but which have troubled the world in all its history.

'To the Inklings I dedicate this book, since they have already endured it with patience - my only reason for supposing that they have a hobbit-strain in their venerable ancestry: otherwise it would be hard to account for their interest in the history and geography of those long-past days, between the end of the Dominion of Elves and the beginning of the Dominion of Men, when for a brief time the Hobbits played a supreme part in the movements of the world.

'For the Inklings I add this note, since they are men of lore, and curious in such matters. It is said that Hobbits spoke a language, or languages, very similar to ours ... [manuscript continues into a discussion of the languages of Middle Earth and their translation in the published book]

From the first draft of what became the Prologue to The Lord Of The Rings, as published in The Peoples Of Middle Earth, Christopher Tolkien, 1996.
Posted by Arborfield at 7:34 am