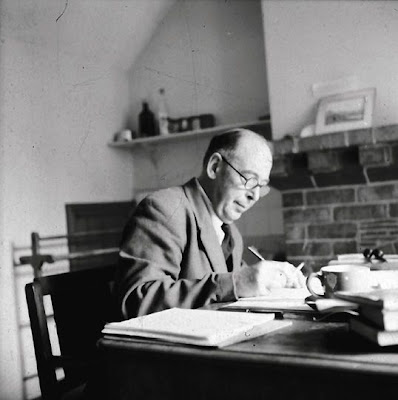 Assessing Lewis as a broadcaster
Lewis made the connection with the audience as strongly as he could in this first broadcast. He insists that he is not preaching, and in common failings such as broken promises and excuses for bad behaviour he is no different to anyone else. He ends by saying that we can't shake off the idea that we know how to behave but in practice don't do so. We break the Law of Nature, realising this is in fact the basis for all clear thinking.

The first talk set the tone for the remainder of the series, Lewis had found a style that suited him and the listener. It was direct, colloquial and intellectually challenging. Only one recording survives of a single talk from Lewis's eventual four series for the BBC. There is a simple explanation for this. Live broadcasts offered a number of critical advantages over pre-recorded talks. First, a live talk has an immediacy and direct conversational approach that a pre-recorded broadcast can seldom match.

Second, once cleared by the censor, a talk could be broadcast without delay. A pre-recorded talk might need to be re-recorded if circumstances had changed between the recording and broadcast.

Third, recording was an expensive process - All recordings were made on twelve-inch metal discs with a coating of cellulose acetate. A steel needle cut the sound track into the disc, producing four minutes of airtime. With metal a costly and scarce resource, recordings were not made of studio broadcasts unless there was a special justification such as historic interest. Reporters in the field had to rely on discs entirely however to record the sounds of war.

Justin Phillips
C.S. Lewis at the BBC
(HarperCollins) 2002
Posted by Arborfield at 7:55 am