C.S. Lewis at the BBC 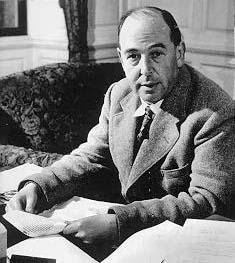 Content of the first broadcast
The first talk sets out the theme for the whole series. Lewis's very first sentence and what follows is what journalists would call a 'grabber'. It engages you right away.

The point Lewis makes is that each of us appeals to or falls back upon a standard of behaviour to which we hold others to account. We may call it lots of things, decency or fair-play, or even morality. The point of a quarrel is to prove someone else is wrong and you are right. This makes no sense unless both sides have some agree¬ment of what is right and what is wrong, just as a foul in football, for instance, means nothing unless both sides are playing to the same rules.

The rest of the talk follows in the same vein, probing and clarifying,, using plenty of illustrations that would ring true. He underlines the assumption we make that the human idea of decent behaviour is universal. If not, then all that is said about the war is nonsense: 'What is the sense in saying the enemy are in the wrong unless right is a real thing which the Germans at bottom know as well as we do and ought to practise?' This sentence, written at the height of the war, is simply put into the past tense when published in Mere Christianity. The ideas that Lewis explores on natural law do not date with the passage of time. One of the keys to Lewis's appeal was his willingness to identify wholly with the listener and to reject any sense of preaching or speaking down to people. He says that none of us succeeds in keeping the law of nature. 'If there are any exceptions among you', he tells the listener, 'I apologise to them. They'd better switch on to another station, for nothing I'm going to say concerns them.' It takes a brave broadcaster to invite listeners to switch off. Lewis could take the risk because he knew that no listeners would consider themselves to be morally perfect, certainly not in August 1941.

Justin Phillips
C.S. Lewis at the BBC
(HarperCollins) 2002
Posted by Arborfield at 7:34 am