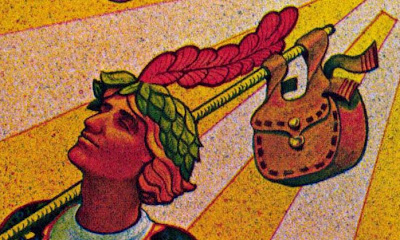 When the word Love had come to mean for her the supreme greatness of man she could hardly remember: one incident and another had forced it on her mind--the moment when her mother, not long before death, had said to her, "Love, Sybil, if you dare; if you daren't, admit it"; the solemn use of the name in the great poets, especially her youthful reading of Dante; a fanatic in a train who had given her a tract: Love God or go to Hell. It was only after a number of years that she had come to the conclusion that the title was right, except perhaps for go to--since the truth would have been more accurately rendered by be in Hell. She was doubtful also about God; Love would have been sufficient by itself but it was necessary at first to concentrate on something which could be distinguished from all its mortal vessels, and the more one lived with that the more one found that it possessed in fact all the attributes of Deity. She had tried to enjoy, and she remembered vividly the moment when, walking down Kingsway, it had struck her that there was no need for her to try or to enjoy: she had only to be still, and let that recognized Deity itself enjoy, as its omnipotent nature was. She still forgot occasionally; her mortality still leapt rarely into action, and confused her and clouded the sublime operation of--of It. But rarely and more rarely those moments came; more and more securely the working of that Fate which was Love possessed her. For it was fatal in its nature; rich and austere at once, giving death and life in the same moment, restoring beyond belief all the things it took away--except the individual will.

Its power rose in her now and filled her with the thought of her brother. As she came from the drive into the road she looked as alertly as she could before her in case he staggered into sight. Whether she was going to find him or not she couldn't tell, but it was apparently her business to look for him, or she wouldn't have felt so strongly the conviction that, of all those in the house, she alone was to go out and search. That she should be walking so lightly through the storm didn't strike her as odd, because it wasn't really she who was walking, it was Love, and naturally Love would be safe in his own storm. It was, certainly, a magnificent storm; she adored the power that was displayed in it. Lothair, she thought, wouldn't be adoring it much at the moment: something in her longed passionately to open his eyes, so that the two of them could walk in it happily together. And Nancy, and Henry--O, and Aaron Lee, and Ralph, and everyone they all knew, until the vision of humanity rejoicing in this tumultuous beauty seemed to show itself to her, and the delight of creation answered the delight of the Creator, joy triumphing in joy.